179 Commonwealth was designed by architect Carl Fehmer and built in 1883 by James Smith, builder, as the home of fertilizer manufacturer William Lambert Bradley and his wife, Frances Marina (Coe) Bradley.  They previously had lived at 61 Commonwealth. They also maintained a home in Hingham. He is shown as the owner of 179 Commonwealth on the original building permit application for 179 Commonwealth, dated March 14, 1883.

Click here for an index to the deeds for 179 Commonwealth, and click here for further information about the land between the north side of Commonwealth and Alley 425, from Dartmouth to Exeter.

In his Houses of Boston’s Back Bay, Bainbridge Bunting indicates that 179 Commonwealth was built ca. 1879.  This may be a typographical error, or may reflect a misreading of the party wall agreement entered into on March 28, 1878, between Frederic Sears Grand d’Hauteville and Charles Whitney, who owned the lot at 181 Commonwealth and was about to begin construction of his house there.

On August 22, 1883, Robert Bradley transferred 179 Commonwealth to his mother.

During the 1886-1887 winter season, William and Frances Bradley were living elsewhere and 179 Commonwealth was the home of Richard Cowell Dixey and his wife, Ellen Sturgis (Tappan) Dixey, whose daughter, Rosamond Sturgis Dixey, was born there in June of 1887.  Richard Dixey was a retired music teacher and pianist.  The Dixeys also later maintained a home in Lenox, Tanglewood, the former property of Ellen Dixey’s family, which she and her unmarried sister, Mary Aspinwall Tappan, inherited.  In 1937, Mary Aspinwall Tappan and Rosamond Sturgis (Dixey) Brooks (who married Gorham Brooks in June of 1913) donated Tanglewood to the Boston Symphony. 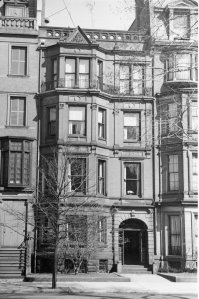 By the 1887-1888 winter season, the Dixeys had moved to 44 Beacon and the Bradleys were living at 179 Commonwealth once again.

Frances Bradley died in December of 1892, and 179 Commonwealth was inherited by William and Frances’s three surviving children: Peter Butler Bradley, Abby Anna Bradley, and Robert Stow Bradley. On December 23, 1892, Peter Bradley and Robert Bradley transferred their interests to their sister. She lived in Hingham.

William Bradley continued to live at 179 Commonwealth until his death in December of 1894.

By the 1897-1898 winter season, 179 Commonwealth was the home of merchant George Dudley Howe and his wife, Alice Lloyd (Greenwood) Howe. They previously had lived at 245 Marlborough. They also maintained a home in Manchester, The Cliffs, built ca. 1878, the first residence designed by architect Arthur Little.

George Howe died in March of 1903. Alice Howe continued to live at 179 Commonwealth during the 1903-1904 winter season, but moved thereafter to 59 Commonwealth.

On June 1, 1904, 179 Commonwealth was acquired from Abby Bradley by a trust established by Daniel Webster King to hold and manage his property. He and his wife, Jennie Walker (Purinton) King, made it their home. They previously had lived at 603 Boylston.

D. Webster King was a glue manufacturer and merchant.

Jennie King died in January of 1912. D. Webster King and Caroline, Anne, and Grace King continued to live at 179 Commonwealth. They also maintained a home, The Pines, at Annisquam near Gloucester.

On April 14, 1924, 179 Commonwealth was purchased from Caroline, Anne, and Grace King by Mary Remington (Stockton) Amory, the wife of William Amory, II. They previously had lived at 341 Beacon.  They also maintained a home in Wareham.

William Amory was a textile manufacturer, having served as treasurer, then president, and then Chairman of the Board of the Pepperell Manufacturing Company.

William Amory died in January of 1954. Mary Amory continued to live at 179 Commonwealth until her death in October of 1964.

On June 7, 1965, 179 Commonwealth was purchased from Mary Amory’s estate by attorney John Noel Williams and his wife, Katherine Lee (Willis) Williams. In July of 1965, John Williams filed for (and subsequently received) permission to convert the property from a single-family dwelling into three apartments. After the remodeling, they lived in one of the apartments; they previously had lived at 9 Joy.

On May 10, 1974, they transferred the property to themselves as trustees of the 179 Commonwealth Trust, and in November of 1974, they filed for (and subsequently received) permission to increase the number of apartments from three to four.

On March 2, 1978, John and Katherine Williams converted the property into four condominium units, the 179 Commonwealth Condominium.