Filling of the Back Bay south of the Mill Dam began in the fall of 1857 and the first houses were constructed on the newly-made land in the early 1860s. The filling was done roughly east to west, with the area north of Commonwealth Avenue proceeding more rapidly than area south of Commonwealth Avenue. As the land was filled, the lots were sold at auction and houses were constructed. 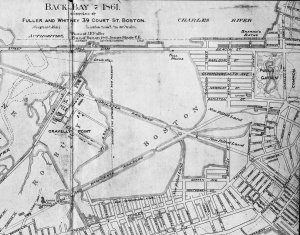 Detail from 1861 plan of the Back Bay; A Set of Plans Showing the Back Bay 1814-1881, by Fuller and Whitney; courtesy of the Boston Athenaeum

The map to the right, prepared by civil engineers Fuller and Whitney in 1881, shows the progress of the land fill by 1861.

During this period, the first two churches to be located in the Back Bay were built: the Arlington Street Church and Emmanuel Church.

The Arlington Street Church at 20 Arlington (northwest corner of Arlington and Boylston) was designed by architect Arthur Gilman and built in 1860-1861 for the Unitarian congregation whose meeting house previously was located on Federal Street.  The cornerstone of the new church was laid on May 28, 1860, and the church was dedicated on December 11, 1861.

Emmanuel Church at 15 Newbury (between Arlington and Berkeley) was designed by architect Alexander Rice Estey and built in 1861 for a newly-formed Episcopal congregation.  The cornerstoe was laid on June 17, 1861, the first service was on December 15, 1861, and the church was consecrated on April 24, 1862.  On its website (in 2015), Emmanuel Church notes that the plan for forming the new church originated with the residents living on the Mill Dam (Beacon Street), in part to avoid the “inconvenience of attendance on distant places of public worship.”

The map below indicates when a building was first constructed on a specific lot through 1864. Included are lots within the residential portion of the Back Bay, as defined for purposes of this website, plus buildings on the north side of Newbury. The dates used are based on original permit applications or similar documentation, when available. When no such documentation is  available, the dates provided in Bainbridge Bunting’s Houses of Boston’s Back Bay are used.

Following the map is a list of the 154 buildings constructed between 1860 and 1864 in the residential portion of the Back Bay.

Original construction on vacant lots: to 1864

Click here for a link to maps showing the progress of construction from 1855 through 2015, in slideshow format.

Below is a list of the 153 buildings constructed between 1860 and 1864 in the residential portion of the Back Bay.  Houses indicated as demolished were replaced by 2015.