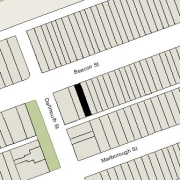 249 Beacon is located on the south side of Beacon, between Clarendon and Dartmouth, with 247 Beacon to the east and 251 Beacon to the west.

Click here for an index to the deeds for 249 Beacon, and click here for further information about the land between the south side of Beacon and Alley 419, from Clarendon to Dartmouth.

In October of 1868, Henry Whitwell advertised in the Boston Traveller to sell 249 Beacon. At the same time, he offered 251 Beacon for lease. 253 Beacon may still have been under construction and he may have wished to lease 251 Beacon until the house to the west had been completed.

On December 17, 1868, 249 Beacon was purchased from Henry Whitwell by Henry White Pickering. He and his wife, Frances Dana (Goddard) Pickering, made it their home. They previously had lived in Roxbury.

Henry W. Pickering was a stockbroker and banker.  The Pickerings’ son, Henry Goddard Pickering, lived with them.  He was a lawyer.

Frances Pickering died in May of 1880.

In 1892, Henry W. Pickering built a home in Beverly Farms.

By the 1902-1903 winter season, 249 Beacon was the home of Dr. Edward Hickling Bradford and his wife, Edith (Fiske) Bradford.  They previously had lived with his mother, Eliza Edes (Hickling) Bradford, the widow of Charles E. Bradford, at 218 Beacon.

Edward Bradford was a physician and surgeon, and later would become Dean of Harvard Medical School. Edith (Fiske) Bradford operated kindergarten school at 140 Marlborough which she had founded prior to their marriage in June of 1900. She continued to operate it until about 1904.

In August of 1906, they purchased and subsequently moved to 220 Beacon, next door to his mother, who had continued to live at 218 Beacon.

On March 29, 1906, 249 Beacon was purchased from Henry G. Pickering and his sister, Rebecca White Pickering, wife of John Grimes Walker, by retired insurance broker Robert Hale Bancroft. He and his wife, Elise (Elsie) Tiffany (Milligan) Bancroft, previously had lived next door, at 247 Beacon, which they continued to own and lease to others. They also maintained a home in Beverly.

It appears likely that it was at this time that an additional story was added to 249 Beacon. It is shown as a four story house, like its neighbors, on the 1902 Bromley map, but as a five story house on the 1908 map.

Robert Bancroft’s sister, Ellen Bancroft, who had lived with the Bancrofts at 247 Beacon, moved with them to 249 Beacon. She continued to live with them until the 1911-1912 winter season, when she moved back to 247 Beacon, where she died in April of 1912.

Elise Bancroft continued to live at 249 Beacon until about 1932.

On November 24, 1936, 247 Beacon and 249 Beacon were acquired from Mary McGill by Shirley Clifford Speed, a real estate dealer who converted many Back Bay houses into lodging houses and apartments. He and his mother, Flora E. (Clifford) Speed, the widow of David George Speed, moved to one of the apartments at 247 Beacon.

By 1939, 249 Beacon was the home of Miss Lucie M. Beete, who operated it as a lodging house. She previously had lived at 64 Maxwell.

She continued to live at 249 Beacon until July of 1946, when she purchased 245 Beacon from S. Clifford Speed and moved there to operate a lodging house. A number of the lodgers from 249 Beacon moved to 245 Beacon with her.

On January 3, 1946, 249 Beacon was acquired from S. Clifford Speed by Karoline (Riess) DeFelice, the former wife of Frank DeFelice. She lived at 239 Beacon, where she operated a lodging house. She married soon thereafter to John W. Erlemann.

On March 7, 1946, 249 Beacon was acquired from Karoline (Riess) DeFelice Erlemann by Samuel Wasserman and his wife, Ella Frances (Brennan) Wasserman, who continued to operate it as a lodging house. They were recently married and 249 Beacon probably was their first home together. He was a wholesale fruit and produce dealer, and later would become a real estate dealer. They continued to live at 249 Beacon in 1950, but had moved to 204 Beacon by 1951.

On December 14, 1950, 249 Beacon was acquired from Samuel and Ella Wasserman by public relations consultant Harry A. Belyea and his wife, Pauline C. (Smith) Belyea. They lived in Newton.

On September 19, 1967, 249 Beacon was acquired by Joseph E. Coppola. He continued to operate it as a lodging house.

On April 13, 1979, Hyman Werlin and Dorothy Y. Werlin, trustees of the Werlin Family Trusts, foreclosed on their mortgage to Joseph Coppola and sold 249 Beacon to Benjamin Gold, trustee of the 249 Beacon Street Trust. That same month, he applied for (and subsequently received) permission to convert the property from a three-family dwelling and lodging house to a three-family dwelling.

On April 25, 1980, 249 Beacon was acquired from Benjamin Gold by Michael E. Markovitz, trustee of the Delaware Capital Trust. On the same day, her converted the property into three condominium units, the 249 Beacon Street Condominium.