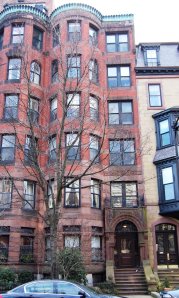 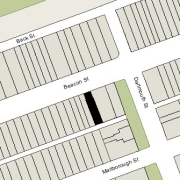 261 Beacon is located on the south side of Beacon, between Dartmouth and Exeter, with 259 Beacon to the east and 263 Beacon to the west.

261 Beacon was designed by Blaikie and Blaikie, architects, and built in 1889 for mason and builder Peter Graffam, one of three contiguous apartment buildings (330 Dartmouth, 259 Beacon, and 261 Beacon) built in 1889-1890. He and his wife, Alice S. (Tufts) Graffam, lived in Malden.

259-261 Beacon were built first, completed in 1889, and known as The Grosvenor; 330 Dartmouth was completed in 1890 and known as The Graffam. Over the years, the three buildings changed hands frequently, sometimes being held by one owner and sometimes being held by different owners. All three were converted into condominiums: 330 Dartmouth in 1979, 259 Beacon in 1984, and 261 Beacon in 1983.

Peter Graffam purchased the land for all three buildings, with a 105 foot frontage on Beacon, on October 25, 1888, from dry goods merchant Eben Dyer Jordan, co-founder of the firm of Jordan, Marsh & Company, who had purchased it one week earlier, on October 19, 1888, from the Commonwealth of Massachusetts. He and his wife, Julia M. (Clark) Jordan, lived at 46 Beacon.

Click here for an index to the deeds for 261 Beacon, and click here for further information about the land between the south side of Beacon and Alley 418, from Dartmouth to Exeter.

On June 8, 1889, the Boston Globe reported on 259-261 Beacon, which were expected to be completed on October 1. “P. Graffam, owner and builder, is erecting upon three lots of land on the southerly side of Beacon street, just west of Dartmouth street corner, a large and costly stone and brick apartment house, to contain 18 suites, with eight rooms and bathroom to each. … Upon every story will be three swell fronts, the first and second stories being of Longmeadow stone, split finish, with a wide hammered belt course, finely chiselled in ornamental carving, the succeeding four floors being of face brick, with Longmeadow freestone trimmings.  There are to be two entrances, the main one being arched and elaborately carved.  The structure will be fire-proof, heated by steam, furnished with electric lights, plate-glass windows, speaking tubes, and all modern conveniences.  The finish will be in oak, cherry and pine. There will be two freight elevators.”

Peter Graffam sold all three buildings between 1889 and 1891. As built, there were open passageways between each building about 7 feet wide running from the alley north about 30 feet to an open courtyard about 11 feet wide and extending about 25 feet to the north. When the buildings were sold, the deeds established easements to ensure that these areas would remain open for the benefit of both properties.

On October 21, 1890, 261 Beacon was acquired from Linus Child by Edward Henry Davies. He and his wife, Susan W. (Bridge) Davies, lived in Portland, Maine, where he was president of the Portland Gas Light Company.

The property subsequently changed hands and on May 1, 1900, was acquired by a trust established under the will of Frederick Lothrop Ames for the benefit of his daughter, Helen Angier (Ames) Hooper, the wife of Robert Chamblet Hooper. The Hoopers lived at 448 Beacon. The trust had acquired 330 Dartmouth and 259 Beacon in April of 1900.

Helen (Ames) Hooper died in February of 1907, and on September 22, 1909, the properties were transferred to Philip Dexter as guardian for her only child, Helen A. Hooper, a minor.

On February 1, 1913, 330 Dartmouth, 259 Beacon, and 261 Beacon were purchased from Loren D. Towle by the Methodist Religious Society, which continued to own them until January of 1923.

William J. Stober retained 330 Dartmouth and sold 259 Beacon and 261 Beacon on December 23, 1926, to Anna Teresa (Connors) Demara, the wife of Napoleon L. Demara. They lived in Lawrence, where he was a theatre owner.

By 1928, Dr. Francis Minot Rackemann, a physician, had leased space at 261 Beacon for his offices. He and his wife, Dorothy (Mandell) Rackemann, lived at 263 Beacon. In December of 1928, he filed for (and subsequently received) permission to remodel 261 Beacon and cut a door through to 263 Beacon, connecting his home with his office. He continued to maintain his office there until the early 1950s, when he moved it to 266 Beacon.

259 Beacon and 261 Beacon remained under separate ownership from that time.

The Milford Savings Bank continued to own 261 Beacon until November of 1941. It subsequently changed hands, remaining five apartments and a medical office.

In September of 1948, Beacon Apartments, Inc. applied for (and subsequently received) permission to convert the property from five apartments and a doctor’s office into fifteen apartments and a medical office.

On October 31, 1950, Beacon Apartments, Inc., transferred the property back to Irving Greenblatt.

On February 28, 1952, 261 Beacon was acquired from Irving Greenblatt by the Stanley Investment Corporation. In June of 1955, it applied for (and subsequently received) permission to change the occupancy from fifteen apartments and a medical office to eighteen apartments.