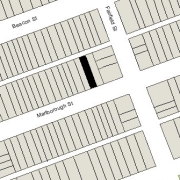 The eight houses were built on a 168 foot wide parcel of land which Frederick Pope assembled from three lots, all of which originally were part of one of several larger parcels originally purchased from the Boston Water Power Company on January 29, 1866, by a real estate investment trust formed by John Templeman Coolidge, Franklin Evans, and Charles Henry Parker. Frederick Pope first purchased the eastern 100 feet directly from the trust on November 19, 1870. He bought the remaining 68 feet in two lots on October 17, 1871, from the estate of Sidney Homer, a 24 foot lot and a 44 foot lot, part of the land Sidney Homer had purchased on June 1, 1869, from J. Templeman Coolidge, Jr., who had purchased it from the trust on April 20, 1866.

Click here for an index to the deeds for 287 Marlborough, and click here for further information about the land between the north side of Marlborough and Alley 416, from Fairfield to Gloucester.

On March 27, 1871, 287 Marlborough was purchased from Frederick Pope by paper manufacturer John Dixwell Thompson. He previously lived at 28 West Cedar.  On the same day, he also purchased 289 Marlborough, which he sold in October of 1871.

Frederick Pope and J. Dixwell Thompson also were partners in purchasing land to the west of 287 Marlborough. On December 20, 1870, they had agreed to purchase jointly an 88 foot wide lot, 64 feet from the estate of Sidney Homer and 24 feet from Franklin Evans. On June 9, 1871, they agreed to divide the parcel, with Frederick Pope subsequently purchasing the eastern 44 feet (where he would build 297-299 Marlborough) and J. Dixwell Thompson purchasing the western 44 feet (where 301-303 Marlborough later would be built).

J. Dixwell Thompson married in November of 1871 to Sally Phillips Blagden and they made 287 Marlborough their home. On October 2, 1871, prior to their marriage, he transferred the property into her name.

From about 1875, Sally Thompson’s father, Rev. George Washington Blagden, lived with them.  He had served as pastor of Old South Church until 1872, and remained pastor emeritus of the church after it moved to Copley Square.  His wife, Miriam (Phillips) Blagden, had died in April of 1874; prior to her death, they had lived at 40 Bowdoin.

J. Dixwell Thompson disappeared while on a trip to New York City in June of 1875 and was presumed dead.

Sally Thompson continued to live at 287 Marlborough with her father during the 1882-1883 winter season.  In April of 1883, she married again, to Edward Cobb Sampson, an oil cloth manufacturer in New York City, where they lived after their marriage.  George Blagden lived with them (he died at their home in December of 1884).

On June 29, 1883, 287 Marlborough was purchased from Sally Sampson by Helen Goodell (Farnsworth) Means, the wife of James Means. They had married in March of 1883, and 287 Marlborough probably was their first home together.

James Means was a shoe manufacturer. He was a pioneer in promoting aviation and published The Aeronautical Annual in 1895, 1896, and 1897.  His December 4, 1920, obituary in the Boston Globe said that his writings inspired the Wright Brothers “to study aviation in a practical way.”

They continued to live at 287 Marlborough during the 1889-1890 winter season, but moved soon thereafter to 196 Beacon.

On October 31, 1890, 287 Marlborough was acquired from Helen Means by Henry Marion Howe. He and his wife, Fannie (Gay) Howe, made it their home.

A former manufacturer of iron and steel, he was a consulting engineer and a lecturer on metallurgy at MIT.  He was the son of Dr. Samuel Howe, founding administrator of the Perkins Institute for the Blind, and Julia Ward Howe, the noted author, poet, and leader of the abolitionist and woman’s suffrage movements.  Earlier in 1890, Henry and Fannie Howe had lived at 241 Beacon, with his mother.

The Howes continued to live at 287 Marlborough until mid-1897, when they moved to New York and he became a professor of metallurgy at Columbia University.

On October 1, 1897, 287 Marlborough was purchased from Henry Howe by Mary Quincy (Gould) Thorndike, the wife of investment banker Albert Thorndike. They previously had lived at The Austerfield at 7-9 Massachusetts Avenue. They also maintained a home in Weston.

During the 1900-1901 winter season, the Thorndikes were living elsewhere, and 287 Marlborough was the home of Anne (Meacham) Dibblee, the widow of California merchant and ranch owner Albert Dibblee, and their son, Benjamin Harrison Dibblee.  He had graduated from Harvard in 1899 and then spent a year in the gold mines of Grass Valley, California.  He had returned to Boston to work for the engineering firm of Stone and Webster.

By the 1901-1902 season, Anne Dibblee and Benjamin Dibblee had moved to an apartment at The Commonwealth at 366 Commonwealth and the Thorndikes were once again living at 287 Marlborough.  They continued to live there during the 1902-1903 season, but moved thereafter to 337 Beacon.

On April 26, 1904, 287 Marlborough was purchased from Mary Thorndike by Katharine Whiteside (Brown) Stackpole, the wife of attorney Joseph Lewis Stackpole, II. They previously had lived at 636 Beacon

They continued to live at 287 Marlborough until 1922, when they moved to 292 Beacon, which had been the home of his parents, John Lewis Stackpole and Martha Watson (Parsons) Stackpole.

On May 23, 1922, 287 Marlborough was purchased from Katharine Stackpole by Elsie Baker (Folsom) Mactaggart, the wife of John Burrow Muir Mactaggart, a retired merchant. They previously had lived at The Charlesgate at 535 Beacon and, before that, in Chestnut Hill. From 1911 to 1916 they had lived at 342 Beacon. They also maintained a home in Pomfret, Connecticut.

By 1940, they had been joined at 287 Marlborough by Elsie Mactaggart’s niece, Dorothy ManInnis (daughter of Edward C. MacInnis and Mabel H. (Folsom) MacInnis).

On June 1, 1959, 287 Marlborough was acquired from Elsie Mactaggart’s estate by Nubar Dinjian. In May of 1959, prior to taking title to the property, he applied for (and subsequently received) permission to convert the property from a single-family dwelling into eight apartments.

The property changed hands and on October 10, 1979, was acquired by Collmer Associates LP (Robert Collier and his wife, Judith H. Collier, general partners). In October of 1979, it filed for (and subsequently received) permission to convert the property from eight to four apartments. On August 6, 1980, it converted the property into four condominium units, the 287 Marlborough Street Condominium.