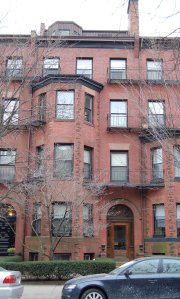 400 Marlborough was designed by Peabody and Stearns, architects, and built in 1887-1888 by Woodbury & Leighton, builders, for Benjamin Williams Crowninshield and Walter Channing Cabot, one of three contiguous houses (398-400-402 Marlborough) built for speculative sale. They are shown as the owners on the original building permit application, dated November 15, 1887, and on the final building inspection report, dated December 26, 1888.

The land for 398-400-402 Marlborough was part of a parcel with a 498 foot frontage on Marlborough, extending to Massachusetts Avenue, purchased by Benjamin Crowninshield and Walter Cabot on January 20, 1880, from John Brooks Fenno and William Storer Eaton. Benjamin Crowninshield and Walter Cabot sold the remainder of the parcel as undeveloped lots.

J. Brooks Fenno and William Eaton had purchased the 498 foot parcel on January 20, 1880 (the same day they sold it to Benjamin Crowninshield and Walter Cabot) from Grenville T. W. Braman, Henry D. Hyde, and Henry M. Whitney, trustees of a real estate investment trust that had purchased several parcels of land on March 1, 1872, from the Boston Water Power Company.

The land owned by the trust originally had been divided by Parker Street, a 60 foot wide street located on top of the Cross Dam, which ran southwest from Beacon at approximately a 45 degree angle, intersecting the south side of Marlborough at a point about 394 feet west of Hereford. After the street was discontinued as a public thoroughfare in 1877, Grenville Braman and his partners acquired the roadway and the land beneath it, and combined it with their other property. The houses at 396-398-400-402-404-406 Marlborough were partially built on land that previously had been Parker Street, with the Cross Dam below.

Click here for an index to the deeds for 400 Marlborough, and click here for further information on the land on the south side of Marlborough between Hereford and Massachusetts Avenue.

On December 10, 1889, 400 Marlborough was purchased from Benjamin W, Crowninshield and Walter C. Cabot by Emeline (Lewis) Cheney, the widow of Arthur Cheney. Their daughter, Ethel Mary Cheney, lived with her. They previously had lived at 341 Marlborough.

Arthur Cheney had been the Boston representative of his family’s silk manufacturing mills and also was owner and manager of the Globe Theatre in Boston.  He had died in October of 1878.

During the 1896-1897 winter season, Emeline Cheney was living elsewhere and 400 Marlborough was the home of Herbert Merriam and his wife, Fanny (Hawes) Merriam.  Herbert Merriam owned and operated Cherry Brook Farm in Weston, which also was their primary residence. They had moved by the next season and 400 Marlborough was once again Emeline and Ethel Cheney’s home.  Mrs. Cheney also maintained a home in South Manchester, Connecticut.

Ethel Cheney married in June of 1903 to Samuel Thorne, Jr., of New York, where they lived after their marriage.

Emeline Cheney continued to live at 400 Marlborough until her death in January of 1915.

On November 26, 1915, 400 Marlborough was purchased from Emeline Cheney’s estate by Dr. Samuel Augustus Hopkins, Jr., a dentist. He lived at 924 Beacon and maintained his dental office at 235 Marlborough (which formerly had also been his home). He was a widower, his wife, Harriet Susanna (Woodworth) Sherman Hopkins, having died in April of 1907. He had recently returned from serving as a member of the Harvard Unit in Europe, working with the British hospital forces to provide medical aid in France and Belgium.

Samuel Hopkins remodeled 400 Marlborough and moved home and dental offices there by the 1916-1917 winter season. He continued to live and maintain his office there until his death in March of 1921.

On October 12, 1922, 400 Marlborough was purchased from Nathaniel Hopkins by real estate dealer George Kissock, and on November 25, 1922, he transferred the property to his sister, Frances Kissock who lived with him in Brookline.

Eleanor Campbell died in May of 1932.

On April 14, 1934, the Suffolk Savings Bank for Seamen and Others foreclosed on a mortgage it held on 400 Marlborough and took possession of the property.

In May of 1934, John A. MacNamara, a real estate manager acting for the bank, applied for (and subsequently received) permission to remodel the property from a lodging house into nine apartments.

On May 29, 1940, 400 Marlborough was acquired from the Suffolk Savings Bank by Miss Beatrice Antonetta Bortone, one of eight Back Bay properties she acquired from the bank at the same time. She was a bookkeeper with Leopold Morse & Co., wholesale and retail clothiers. She lived in Wayland with her parents, Anthony C. Bortone and Maria (Larocca) Bortone. In 1946, she married Albert DeStefano. After their marriage, they lived in Newton.

On August 28, 1957, 400 Marlborough was acquired from Beatrice (Bortone) DeStefano by real estate dealer Overton W. Oglivie, who also acquired most of her other Back Bay properties on the same day.

The property changed hands and on June 21, 1967, was acquired by John V. Kunigenas.

On June 29, 1973, 400 Marlborough was purchased from John Kunigenas by Anthony P. Baker, as general partner of Bay Associates Limited Partnership II, and on July 7, 1976, John V. Kunigenas foreclosed a mortgage given by Anthony P. Baker and took back possession of the property.

On September 30, 1979, 400 Marlborough was purchased from John Kunigenas by John R. Giles, trustee of the Capitol Realty Trust.

On September 12, 1982, he converted the property into nine condominium units, the 400 Marlborough Street Condominium.

On September 14, 1984, the 400 Marlborough Condominium Trust applied for (and subsequently received) permission to add a penthouse.