277-279 Marlborough and 8-10-12 Fairfield were built on a parcel of land originally purchased from the Boston Water Power Company on February 16, 1863, by Daniel Davies, Jarvis Dwight Braman, and Grenville Temple Winthrop Braman (Suffolk Co. Deed Registry, Book 826, p. 86). It was one of four parcels purchased by Daniel Davies and his partners at the same time. The parcels were at the west end of the block between Exeter and Fairfield, on the south side of Beacon, the north and south side of Marlborough, and the north side of Commonwealth.

The blocks between Exeter and Fairfield are 600 feet in length. The boundary between the lands owned by the Commonwealth of Massachusetts on the east and the lands owned by the Boston Water Power Company on the west was located at a point about 505 feet west of Exeter. The land purchased by Daniel Davies and his partners included all of the Boston Water Power Company’s land between the boundary on the east and Fairfield on the west (shown on the plan as Lots A, B, C, and D, east of “6th Street”).

However, the deeds from John L. Gardner to James Jackson (Book 1510, p. 230; 3Dec1880) conveying 8 Fairfield and to Charles G. White (Book 1539, p. 22; 1Oct1881) conveying 10 Fairfield indicate the northern and southern boundaries as 47.13 feet. This substantially accounts for the difference between the original deeds from the Boston Water Power Company and the Commonwealth. The deeds conveying 12 Fairfield continued to indicate the north-south boundaries as 47.57 feet and do not reconcile the discrepancy.

The boundaries of 8-10 Fairfield were set forth in a plan prepared by Fuller & Whitney (Book 1510, end of book; 19Nov1880). That plan also illustrated the passageway across the rear of 10-12 Fairfield to provide access to Marlborough. 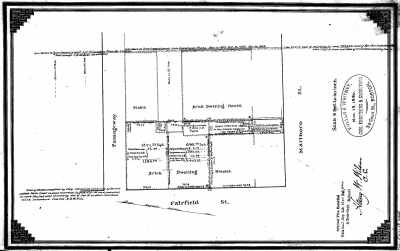