175 Commonwealth was designed by Peabody and Stearns, architects, and built in 1881 by Woodbury & Leighton, builders, as the home of banker and trustee Charles Merriam and his wife, Helen (Jaques) Merriam.  They previously had lived at 263 Beacon.  They also maintained a home in Nahant. Charles Merriam is shown as the owner of 175 Commonwealth on the original building permit application, dated March 15, 1881.

Click here for an index to the deeds for 175 Commonwealth, and click here for further information about the land between the north side of Commonwealth and Alley 425, from Dartmouth to Exeter.

Helen Merriam died in September of 1904.  Charles Merriam continued to live at 175 Commonwealth until his death in November of 1906.

On February 28, 1907, 175 Commonwealth was purchased from Charles Merriam’s estate by Stephen Long Bartlett, importer of cocoa and chocolate. He and his wife, Florence (Ricker) Bartlett, made it their home. They previously had lived in Chestnut Hill.

Stephen Bartlett transferred 175 Commonwealth to his wife on June 11, 1914; the deed was not recorded until November 20, 1920, and he therefore remained the assessed owner through 1920.

Florence Bartlett died in March of 1937 and 175 Commonwealth was inherited by Stephen Bartlett. He died in October of 1937. 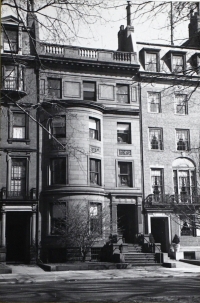 On December 20, 1939, 175 Commonwealth was acquired from Stephen Bartlett’s estate and residuary devisees by real estate dealer Henry Joseph O’Meara. On January 12, 1940, it was acquired by the Town Bridge Club, and then acquired on February 6, 1940, by Henry O’M’eara’s wife, Mildred Marie (O’Brien) O’Meara. In April of 1940, the Town Bridge Club acquired 109 Commonwealth, changed its name to the Cavendish Club, and operated its club rooms there until the early 1950s.

On December 27, 1940, 175 Commonwealth was acquired from Mildred O’Meara by Rev. Eleanor Mel. Three days later, she transferred the property to the Church of Jesus Christ. Thereafter, she operated the property as the Boston Home of Truth, with herself as pastor.  The Boston Home of Truth was a New Thought Movement congregation following the teachings of Annie Rix Militz.

In September of 1954, the church filed for (and subsequently received) permission legalize the occupancy of 175 Commonwealth as church offices and lodgings.

In November of 1957, the church acquired 177 Commonwealth, and in September of 1959, it applied for (and subsequently received) permission to cut doors between the two properties.  The use of 177 Commonwealth was shown as a “church reading room.”

Both properties were operated as the Boston Home of Truth until the early 1960s.

Eleanor Mel died in July of 1964. In December of 1964, the church sold 177 Commonwealth, specifying in the deed that, as long as the church continued to own 175 Commonwealth, 177 Commonwealth could be used only as single-family or multi-family residence and not as a rooming, guest or boarding house, or dormitory, or for institutional, business or commercial purposes.

The church continued to operate at 175 Commonwealth as the Church of Jesus Christ in 1965, and as the Unity of Boston Church in 1967. By 1967, the offices of the Protestant Guild for the Blind also were located at 175 Commonwealth.

By 1970, the church had ceased operations at 175 Commonwealth but continued to own the property. The Protestant Guild for the Blind continued to maintain its offices there until the mid-1970s.