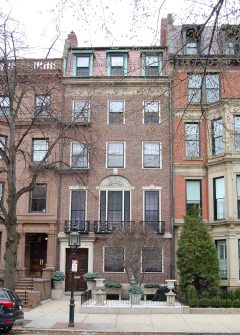 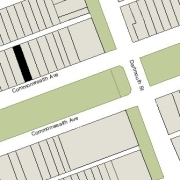 173 Commonwealth was designed by Peabody and Stearns, architects, and built in 1879 by Morton & Chesley, carpenters, and Standish & Woodbury, masons. It was built the home of Roger Wolcott and his wife, Edith (Prescott) Wolcott.  He is shown as the owner on the original permit application, dated October 30, 1879.

Click here for an index to the deeds for 173 Commonwealth, and click here for further information about the land between the north side of Commonwealth and Alley 425, from Dartmouth to Exeter.

By 1881, Roger and Edith (Prescott) Wolcott had made 173 Commonwealth their home. They previously had lived at 59 Marlborough. They also maintained a home in Readville/Milton. It was destroyed by fire on November 15, 1887, and subsequently rebuilt by the Wolcotts.

Although a member of the Bar, Roger Wolcott did not actively practice law, but rather focused on the management of his investments and on public service.  He served on the Boston Common Council from 1877 to 1879, and was elected to the State House of Representatives in 1882.  In 1892, he was elected Lieutenant Governor and re-elected in 1893, 1894, and 1895.  Upon the death of Governor Greenhalge in 1896, he became acting governor.  He was elected Governor in November 1896 and re-elected in 1897 and 1898. 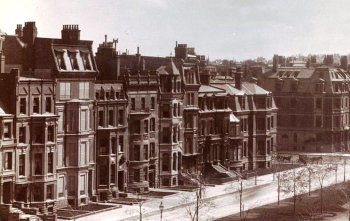 Roger Wolcott died in December of 1900. After his death, Edith Wolcott and their children spent the next two winter seasons at their home in Readville/Milton.

During the 1902-1903 winter season, 173 Commonwealth was the home of William Hadwen Ames and his wife Mary Elizabeth (called Daisy) (Hodges) Ames.  In 1901, they had lived at 120 Beacon.  They also maintained a home in North Easton.  William Ames was Secretary of his family’s business, the Ames Shovel Company (located in North Easton), and later was president of the American Pneumatic Service Company, which built and operated pneumatic tube systems to deliver mail in Boston, New York, Chicago, and St. Louis. 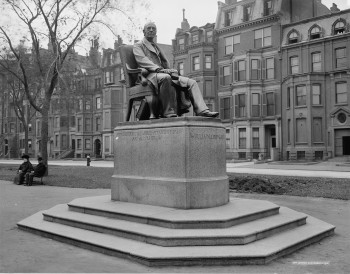 Edith Wolcott and her family resumed living at 173 Commonwealth during the 1903-1904 winter season.

Roger Wolcott, Jr., an attorney, married in June of 1904 to Claire Morton Prince of 458 Beacon.  After their marriage, they lived in Readville/Milton near his mother’s home.

Samuel Huntington Wolcott , an investment banker, married in June of 1907 to Hannah Stevenson,  After their marriage, they lived in Readville/Milton.

During the 1906-1907 and 1907-1908 winter seasons, Edith Wolcott was traveling abroad and 173 Commonwealth was the home of ornithologist John Eliot Thayer and his wife Evelyn Duncan (Forbes) Thayer. They had lived at 251 Commonwealth during the 1905-1906 season. They also maintained a home in South Lancaster.

By the 1908-1909 season, the Thayers had moved back to 251 Commonwealth and Edith Wolcott once again was living at 173 Commonwealth.  She continued to live there during the 1910-1911 winter season.

173 Commonwealth (1919), from Executed Work of Parker, Thomas, and Rice, courtesy of Tudy Bartlett

Cornelia Wolcott married in April of 1911 to Rev. Samuel Smith Drury, Rector of St. Paul’s School in Concord, Massachusetts, where they lived after their marriage.

Edith Wolcott subsequently made her home in Readville/Milton and leased 173 Commonwealth to others.  William Prescott Wolcott and Oliver Wolcott continued to live with her. William Wolcott was a bond broker until about 1913, when he purchased a farm in Canton, which he subsequently operated.  Oliver Wolcott graduated from Harvard in 1913 and became a lawyer.

During the 1911-1912 winter season, 173 Commonwealth was the home of John Lee Saltonstall, a stock and bond broker, and his wife, Gladys Durant (Rice) Saltonstall.  They had married in December of 1910 and their primary residence was in Beverly, which he represented in the State Legislature in 1911 and 1912.  Prior to their marriage, he had lived at 30 Fairfield with his brother-in-law and sister, Neal and Lucy (Saltonstall) Rantoul (30 Fairfield was the Saltonstall family’s Boston home; John and Lucy’s parents, William Gurdon Saltonstall and Josephine Rose (Lee) Saltonstall, had both died in 1889).

By the 1912-1913 winter season, 173 Commonwealth was the home of Maria Louisa (Robbins) Davis, the widow of Edward Livingston Davis, who had died in March of 1912.  He had been a manufacturer of railroad iron and was a former Mayor of Worcester, where they had lived at the time of his death.  They also maintained a home in Pride’s Crossing.

She continued to live at 173 Commonwealth until her death in June of 1916.

During the 1916-1917 winter season, 173 Commonwealth was the home of Philip Stockton, president of the Old Colony Trust Company, and his wife Margaret (Head) Stockton. They had lived at 55 Commonwealth during the previous season. They also maintained a home, Highcliff, in Manchester, Massachusetts. By the 1917-1918 season, they had moved to 9 Gloucester. 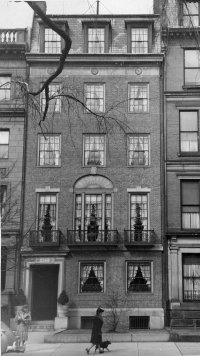 On November 30, 1917, 173 Commonwealth was purchased from Roger Wolcott’s estate and Edith Wolcott by architect John Harleston Parker.  He had the house almost completely rebuilt by W. A. Wentworth Co. to his design. He and his wife, Edith Value (Stackpole) Parker, lived at 289 Marlborough and also maintained a home at Smith’s Point in Manchester.

Harleston Parker died in May of 1930. Edith Parker continued to live at 173 Commonwealth until about 1944.

On August 29, 1944, 173 Commonwealth was purchased from Edith Parker by real estate dealer Joseph P. Brennan, and on October 16, 1944, it was acquired from him by Louis J. Binda. He was an elevator starter at a downtown Boston building who frequently held property for various other owners. He was unmarried and lived in Cambridge.

On May 29, 1953, 173 Commonwealth was acquired from Louis Binda by attorney Samuel E. Angoff and his wife, Janice E. (Gilman) Angoff. They lived in one of the apartments. They previously had lived in Brighton.

On May 30, 1969, 173 Commonwealth was purchased from Janice Angoff by James A. Gillis and his wife, Cathy Gillis.

173 Commonwealth remained an apartment building, assessed as a 7-to-30 unit building in 2020. In 2021, it was assessed as a four-to-six family dwelling.