176 Commonwealth was designed by architect Charles Atwood and built in 1883-1884 by Benjamin F. Dewing and Morton & Chesley, builders, one of two contiguous houses (176-178 Commonwealth) designed as a symmetrical pair with lower stories in the Romanesque style and the dormer pediments in a Flemish style.

The houses were built for physicians and each had two front entrances, one on the outer side of the front façade, for use by the residents, and the other on the inner side, where the two houses join, for use by patients.  The porches to the entrances are enclosed and fronted with three arches (the two entrances to what were the medical offices sharing the center porch and arch) with windows in the bays between the arches, creating a continuous plane across the entire front of the two buildings.  Although this design would appear to violate the original setback restrictions in the Back Bay deeds, in 1894, the Board of Harbor and Land Commissioners (the agency with jurisdiction to enforce the deed restrictions) determined that it did not.

176 Commonwealth was built as the home and medical office of Dr. William Palmer Wesselhoeft, a homeopathic physician, and his wife, Sarah F. (Allen) Wesselhoeft.  They previously had lived (and he had maintained his office) at 52 Boylston, possibly in association with James Batchelder Bell, also a homeopathic physician, who maintained his offices at the same address and for whom 178 Commonwealth was built.  William Wesselhoeft is shown as the owner of 176 Commonwealth on the original building permit application, dated October 5, 1883.

William Wesselhoeft and James Bell each purchased the land for their homes on June 14, 1883, from Richard H. Stearns. He had purchased both lots from the Commonwealth of Massachusetts on June 5, 1883.

Click here for an index to the deeds for 176 Commonwealth, and click here for further information about the land between the south side of Commonwealth and Alley 434, from Dartmouth to Exeter.

On August 17, 1884, the “Table Gossip” column in the Boston Globe reported that “Dr. William P. Wesselhoesft will occupy his new house on Commonwealth avenue in September.”

Alice Wesselhoeft married in November of 1886 to Arthur Augustus Haserick, in importer of textile machinery in his father’s firm. He previously had lived at 256 Commonwealth with his parents, Frederick Augustus Haserick and Minna Emily (Hedwig) Haserick. After their marriage, Arthur and Alice Haserick lived at the Hotel Victoria at 273 Dartmouth.

Sarah Wesselhoeft died in January of 1901. Dr. Wesselhoeft continued to live and maintain his medical office at 176 Commonwealth.  He also maintained a home at York Harbor, Maine.

William Fessenden Wesselhoeft continued to maintain his office at 176 Commonwealth with his father, and during the 1903-1904 and 1904-1905 winter seasons, he and Emily lived there with his father. They had been living at 851 Boylston. By 1906, William and Emily Wesselhoeft had moved to 398 Marlborough, where he also relocated his office.

On December 13, 1911, 176 Commonwealth was purchased from William P. Wesselhoeft’s estate by real estate investor Albert Geiger and his son, Albert, Jr., and William and Emily Wesselhoeft moved back to their home at 398 Marlborough. 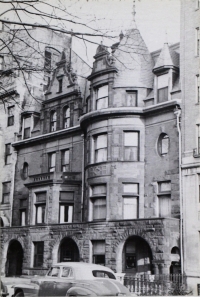 The December 15, 1911, Boston Globe article on the transaction indicated that the Geigers had purchased 176 Commonwealth with the intention “to improve the building by constructing several modern suites.”

On December 16, 1912, 176 Commonwealth was purchased from the Geigers by real estate dealer Renton Whidden. He lived in Brookline.

By the 1913-1914 winter season, 176 Commonwealth had been leased by Dr. Henry Lincoln Houghton, a homeopathic physician, and his wife, Cornelia (McAvoy) Houghton. He also maintained his medical offices at the house. They previously had lived at The Charlesgate at 535 Beacon and he had maintained his office at 419 Boylston. They also maintained a home in Winchester.

On December 10, 1945, 176 Commonwealth was purchased from Howard Cosgrove by Olive Melville (Roche) Kindlund, the widow of Eric Axel Kindlund. She lived in Scituate. In March of 1946, she filed for permission to increase the occupancy from a doctor’s office and three apartments to a doctor’s office and four apartments. She subsequently abandoned the application.

Henry and Edna Phyllis Houghton continued to live (and he to maintain his office) at 176 Commonwealth until his death in June of 1948.

The property subsequently changed hands and on November 6, 1957 was purchased by Delillus (Crockett) Kipp, the wife of attorney Roy Frank Kipp. She and her husband owned and lived at 178 Commonwealth and also owned 172 Commonwealth, 174 Commonwealth, and 163 Commonwealth (across the street).

On February 27, 1992, 176 Commonwealth was acquired from Delillus Kipp by Bruce A. Percelay. In June of 1993, he filed for (and subsequently received) permission to convert the property from a doctor’s office and three apartments into seven apartments.

The property subsequently changed hands. It remained an apartment house in 2016.