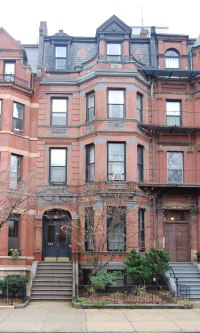 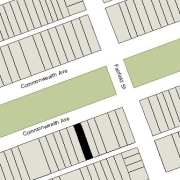 256 Commonwealth designed by architect William P. Wentworth and built in 1879 by Uriah H. Coffin, a building contractor, probably for speculative sale.  He is shown as the owner on the original building permit application, dated September 15, 1879.  The application does not indicate the architect.

Uriah Coffin purchased the land for 256 Commonwealth on August 25, 1879, from John Fisher Farrington, also a building contractor. He had purchased the lot on May 17, 1879, from George B. Hyde. The land had changed hands several times and was part of a parcel previously owned by Nathan Matthews, part of an even larger tract he had purchased on January 2, 1871, from David Sears, Jr., Frederick R. Sears, and Knyvet Sears.

The original building permit application for 256 Commonwealth does not indicate the name of the architect and Bainbridge Bunting’s Houses of Boston’s Back Bay does not attribute the house to a specific architect. However, W. P. Wentworth is shown as the architect on a drawing of the house which appeared in the October 18, 1879, issue of the American Architect and Building News.

Click here for an index to the deeds for 256 Commonwealth, and click here for further information about the land between the south side of Commonwealth and Alley 432, from Fairfield to Gloucester. 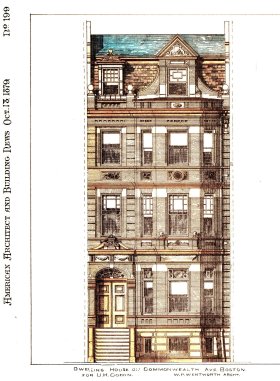 On August 13, 1880, 256 Commonwealth was purchased from Uriah Coffin by Frederick Augustus (Friedrich August) Haserick. He and his wife, Minna Emily Hedwig (von Beulwitz) Haserick, made it their home. They previously were lodgers at 14 Arlington.

Frederick Haserick was an importer of textiles and textile manufacturing machinery with the firm of Stoddard, Lovering & Co. (later Stoddard, Haserick, Richards & Co.).

In November of 1895, the Hasericks offered 256 Commonwealth for sale. The house did not sell and they continued to live there during the 1895-1896 winter season, but moved thereafter to Dresden, Germany.

On September 11, 1896, 256 Commonwealth was purchased from Frederick Haserick by James Howe Proctor, trustee for the benefit of his sister, Emily W. (Proctor) Mandell, the wife of George Snell Mandell. The Mandells had married in April of 1896 and they made 256 Commonwealth their home. They also maintained a home in Beverly.

George Mandell’s father, Samuel Pierce Mandell, was publisher of The Boston Transcript.  George Mandell worked for the Transcript in various positions, including serving as treasurer and editor, and after his father’s death in 1920, he became the publisher.

George and Emily Mandell continued to live at 256 Commonwealth during the 1905-1906 winter season, after which they moved to 247 Commonwealth, which they had purchased in November of 1905 and had significantly remodeled. 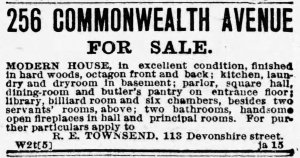 On April 16, 1906, 256 Commonwealth was purchased from Emily Mandell’s trust by Melissa (Frost) Phelps, the wife of George H. Phelps. They also maintained a home, The Beacon, in Wianno on Cape Cod.

Marie Phelps married in September of 1908 to Henry Fay, a professor of chemistry at MIT. He previously had been a lodger at 29 Marlborough. After their marriage, they lived in an apartment at 409 Marlborough.

Margery Phelps married in September of 1913 to Francis William Bird, a lawyer in New York City, where they lived after their marriage. In December of 1914 they moved to Boston when he became publisher of the Boston Daily Advertiser and the Evening Record, which his father, Charles Sumner Bird, had purchased that year.  Francis and Margery Bird made 112 Marlborough their home.

On February 7, 1914, 256 Commonwealth was purchased from Melissa Phelps by Mildred Carruth (Dix) Leeson, the wife of Robert Ainsworth Leeson. They had previously lived in an apartment at 290 Commonwealth.   They also maintained a home in Newton Centre and later in Marblehead.

Robert Leeson was a manufacturer of textile machinery.

Mildred Leeson died in May of 1928.  Robert Leeson continued to live at 256 Commonwealth until about 1942. when he moved to the Hotel Puritan at 390 Commonwealth.

On July 8, 1942, 256 Commonwealth was purchased from Robert Leeson by real estate dealer Ray C. Johnson, and on the same day, he conveyed the property to Agnes Johanna Walther and Marion Eleanor Walther, sisters.

256 Commonwealth became the home of their father, John Gotthard Walther, an engineer with the National Casket Company. A widower, he previously had lived in Arlington. Marion Walther lived at 109 Peterborough. Agnes Walther lived at 143 Park Drive; she married in the early 1940s to Richard L. Newton and moved to Elizabeth, New Jersey.

In May of 1943, John Walther filed for (and subsequently received) permission to convert the property from a single-family dwelling into a lodging house. He continued to live there in 1944, but moved thereafter to Allston.

On June 5, 1944, 256 Commonwealth was acquired from Agnes (Walther) Nelson and Marion Walther by Ruth Catherine (Hebb) Hoskin Caffrey, the former wife of Franklin E. Hoskin and of Thomas Francis Caffrey. She operated it as a lodging house. She previously had lived at 21 Crandall, where she also operated a beauty shop.

Ruth Caffrey continued to live at 256 Commonwealth, and operate it as a lodging house, until about 1946. She subsequently lived in Duxbury and then, in June of 1951, acquired 61 Marlborough, where she lived and operated a lodging house. 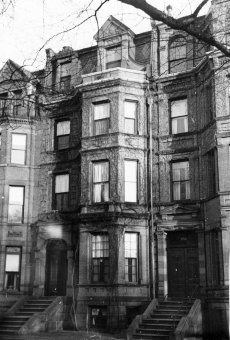 On April 3, 1946, 256 Commonwealth was acquired from Ruth Caffrey by Gladys M. Whipple, who operated it as a lodging house. She previously had lived at 208 Beacon.

On May 5, 1948, 256 Commonwealth was acquired from Gladys Whipple by Grace S. (Baxter) Frederick Dawes, trustee, the wife of William Mills Dawes, an accountant. They lived at 325 Commonwealth. Grace Dawes also owned 211 Beacon and in November of 1953 acquired 13 Marlborough. She operated all three as lodging houses.

On May 1, 1957, 256 Commonwealth was acquired from Grace Dawes by Pollyann Elizabeth (Tillinghast) Frost, the former wife of Burton Willis Frost, Jr., as trustee of the Pollyann Realty Trust. She acquired 211 Beacon and 13 Marlborough at the same time, and operated all three as lodging houses. She lived in an apartment at 29 Fairfield and then, from 1961, at 1 Exeter.

On January 16, 1942, 256 Commonwealth was acquired from Pollyann T. Frost by the Wendell Realty Corporation (Herbert Levin, president). It acquired 13 Marlborough from her on the same day.

On April 8, 1965, 256 Commonwealth was acquired from Wendell Realty by Robert Gross and his wife, Dorothy B. Gross. They purchased 13 Marlborough at the same time. The Grosses lived in Brookline and continued to operate both properties as lodging houses.

In September of 1985, Charles Patsos submitted two applications, one to convert 256 Commonwealth from a lodging house into eight apartments and the other to convert it into seven apartments. Both applications appear to have been abandoned.

On March 18, 1986, 256 Commonwealth was purchased from Charles Patsos by Berton M. Hochfeld. The next day, he transferred the property to the H & P Associates Limited Partnership III.

In July of 1986, H & P Associates applied for (and subsequently received) permission to remodel the property from a lodging house into seven apartments.