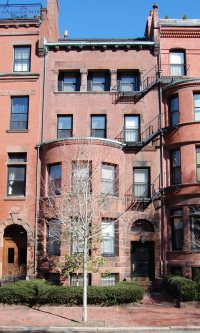 257 Marlborough was designed by Cabot and Chandler, architects, and built in 1883 by Woodbury & Leighton, builders, as the home of merchant William Simes and his wife, Fannie Swett (Newell) Simes.  He is shown as the owner on the original building permit application, dated March 23, 1883.  They previously had lived at 289 Marlborough.

As was customary, the western wall of 257 Marlborough was built so that the boundary line between it and the adjoining land ran through the middle of the party wall. On March 22, 1883, William Simes purchased from the Commonwealth of Massachusetts the six inch strip of land to the west, on which half of the party wall had been built; he then sold it in April of 1884 to the owner of 259 Marlborough when that house was being built, thereby recouping half of his costs of building the wall.

257 Marlborough was completed and the Simeses had made it their home by the 1883-1884 winter season. On October 29, 1885, he acquired the land for the house from the Commonwealth of Massachusetts. He previously had entered into an agreement with Commonwealth to purchase the land but did not take title until after it was built.

Click here for an index to the deeds for 257 Marlborough, and click here for further information about the land between the north side of Marlborough and Alley 417, from Exeter to Fairfield.

William and Fannie Simes continued to live there during the 1885-1886 winter season, but moved thereafter to a new home they had built at 401 Marlborough.

On June 1, 1886, 257 Marlborough was purchased from William Simes by Susan Parkman (Munro) Battelle, the wife of dry goods commission merchant Eugene Battelle. They previously had lived at 317 Dartmouth.

During the 1905-1906 winter season, the Battelles were living elsewhere and 257 Marlborough was the home of Frank Brewer Bemis and his wife, Marion Wells (Cumings) Bemis.  They also maintained a home at Beverly Farms.  Frank Bemis was a banker and also a noted book collector.  By the 1906-1907 season, they had moved to 270 Clarendon and 257 Marlborough once again was the Battelles’ home.

During the 1919-1920 winter season, 257 Marlborough was the home of William Francis Warden and his wife, Eleanor Cotton (Denham) Warden.  They had lived at 263 Beacon during the previous season.  He was an artist and, prior to the outbreak of World War I, they had lived in Paris for a number of years.  By the 1920-1921 season, they had moved to 155 Beacon.

On June 30, 1920, 257 Marlborough was purchased from the Battelle family by John Reed Post, a cotton dealer, and his wife, Mabel (Davis) Post. They previously had lived at 313 Marlborough. They also maintained a home in Beverly Farms.

On July 5, 1939, they transferred the property into Mabel Post’s name.

On February 12, 1957, 257 Marlborough was purchased from Mabel Post’s estate by John Hollingdale, and on March 15, 1957, it was acquired from him by Luykx Incorporated (Dirk J. Luykx, president).

In February of 1954, Dirk Luykx applied for (and subsequently received) permission to convert the property from a single-family dwelling into ten apartments. He was an architect.

In March of 1986, Mikhail Gissin applied for (and subsequently received) permission to increase the number of units from ten to eleven.  In May of 1986, the condominium master deed was amended to reflect the increased number of units.