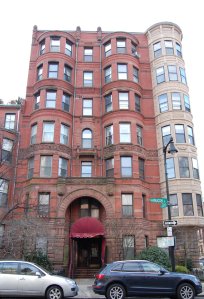 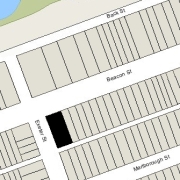 295-297 Beacon, the Hotel Royal apartments, was designed by architect Samuel D. Kelley and built in 1885-1886 by William Carpenter, builder, and L. P. Soule, mason, for George H. Brooks.  He is shown as the owner on the original building permit application, dated October 3, 1885, and on the final building inspection report, dated December 2, 1886.

295-297 Beacon was built on two parcels of land. George Brooks acquired the parcel to the west, a 30 foot wide lot at the corner of Beacon and Exeter, on July 3, 1885, from real estate dealer Samuel Horatio Whitwell, who had acquired the land from the Commonwealth of Massachusetts on June 30, 1885. George Brooks acquired the 24 foot lot to the east on August 13, 1885, from dry goods merchant Eben Dyer Jordan, co-founder of Jordan, Marsh & Company, who also had acquired the land from the Commonwealth on June 30, 1885. The land originally had been sold by the Commonwealth at its public auction on November 26, 1866. Charles Pope had been the successful bidder for the corner lot, and had subsequently sold or transferred his right to purchase it. Eben Jordan had been the successful bidder for the lot next to the corner, along with six other 24 foot lots to the east.

Click here for an index to the deeds for 295-297 Beacon, and click here for further information about the land between the south side of Beacon and Alley 418, from Dartmouth to Exeter.

On February 8, 1886, the Boston Herald published a lengthy article on the hotel, noting that work began in October of 1885 and “It is now but two stories high. By September next, perhaps sooner, the structure will have assumed a magnificent and imposing appearance, 80 feet in height, with seven floors, divided into 160 rooms. These apartments will be arranged in suites with every convenience and luxury known to modern architecture.” 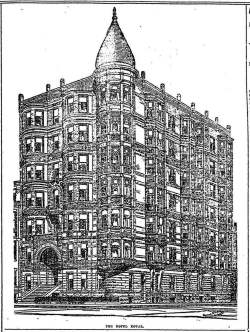 The article noted that “considerable difficulty was experienced in making a good solid foundation for the building” because the builders encountered “stone and crib work” from a former sluiceway for the Mill Dam. “The structure is supported by 1000 piles driven in rows under the foundation walls. These are capped with granite 48 inches wide. Imbedded in cement on the top of these granite blocks are others equally as substantial, but smaller in size. From this solid foundation, the walls of the building rise at a thickness of 24 inches for a distance of 12 feet or more. From here to the top of the building the walls will be 16 inches thick, laid in equal portions of cement and mortar. …

“The first story is built of Longmeadow freestrone, with ashlar face and moulded sill and capcorners. The rest of the superstructure will be composed of selected face brick and rock faced Longmeadow stone, with a richly carved belt between the second and third story windows. The other adornments … are terra cotta panels and beautifully moulded brick corners. Richly decorated oriel windows made of copper will adorn the corners. These windows will terminate at the top with a handsomely ornamented tower, also made of copper. The entire copper work will be covered with a preparation to preserve its natural color as nearly as possible.

“The basement of the building, which rises to the street, offers accommodation for the elevator machinery, boilers, heating apparatus and various apartments for fuel, vegetable and cold cellars. They extend under the sidewalk for quite a distance. …”

“Over the doorway there is now to be seen an arc of freestone beautifully carved, resting on a cluster of columns with elaborate ornamented caps. The steps leading to the doorway are also to be of freestone. The main hall will be 7 feet and 6 inches in width, and will terminate at the entrance of the elevator. It will be elegantly finished in marble. The woodwork will be of mahogany and cherry. The hall floor is to be inlaid with imported mosaic of unique design. It is the intention of the builder to finish the lower hall with marble, mahogany and cherry, which will give it a decidedly elegant appearance. … 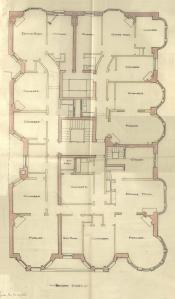 “Marble, mahogany and cherry trimmings will extend along the staircase to the upper story. The staircase leading to the second story begins to the left and runs spiral fashion, around the elevator, making two turns and will have two landings, a novelty to the interior finish of a building. The main staircase emerges to the right. From the second story to the top of the building the stairs will ascend from the left and descend from the right. The main staircase will be constructed of marble and iron, no woodwork being used except for the hand rail, which will be solid mahogany. The under side of the stairs will be exposed to view with the treads also in a highly polished state. This stairway will be enclosed in sold masonry, and extend 13 feet above the roof and covered with a skylight. The entrance for servants will be on the south passageway from Exeter street. They will reach the the several apartments by two flights of stairs, which will extend from the cellar to the roof, enclosed in brick walls. They, too, will extend above the roof and be covered by skylights. Both of the staircases will have iron frames treads. The several doors leading to these stairways will be covered with metal with a view of precluding any chance of flames spreading to the apartments in case of fire.

“Adjoining each of the servants’ staircases will be placed a freight elevator, which will be large and powerful enough to life a grand piano. They will be made commodious, with a view of hoisting furniture, etc. This will be a novelty in flat or apartment houses.

“The halls of the second story will be finished in the same elegant manner as that leading to the street. In fact, all the hallways will be tastefully arranged and in keeping with the rest of the interior fittings. None of the suites of rooms are very large, yet their arrangement will make them appear roomy. The ceilings and walls will be magnificently decorated and finished in hard wood.”

George H. Brooks had been a retail clothing merchant in Boston. He had moved to Cincinatti by 1870, where he was a wholesale liquor dealer. By 1880, he had returned to Boston and become a real estate investor.

George H. Brooks had been a retail clothing merchant in Boston, but moved to Cincinatti by 1870, where he was a wholesale liquor dealer. By 1880, he had returned to Boston and become a real estate investor.

He and his wife, Sarah T. (Smith) Brooks, lived at 317 Beacon while the Hotel Royal was being built. Their son and daughter-in-law, banker and stockbroker George Chelson Brooks and Carrie L. (Story) Brooks, lived with them. They also maintained a home in Swampscott.

When the Hotel Royal was completed, George and Sarah Brooks moved to the new building. George and Carrie Brooks moved with them. They continued to live there until January of 1891, when they all moved to 130 Commonwealth.

George and Sarah Brooks were legally separated by December of 1895 and he died in May of 1896. In his will, he left his entire estate to his son, George (whom he also named as executor), and left his wife “the sum of $1.00 and such interest in property of which I shall die seized, both real and personal, as she is entitled to by operation of law, and no more.”

On July 9, 1896, George C. Brooks transferred a one-half undivided interest in 295-297 Beacon and in 130 Commonwealth to his mother, and she named him her “attorney irrevocable” for all matters associated with the Hotel Royal.

George and Carrie Brooks lived at the Hotel Royal during the 1896-1897 and 1897-1898 winter seasons, after which they moved to 7 Bay State Road. They also continued to maintain a home in Swampscott. 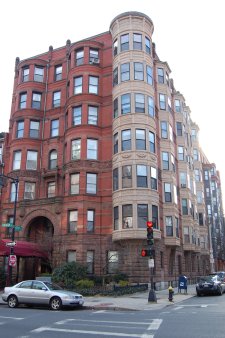 On December 22, 1897, the Hotel Royal was damaged by a fire which started in a third floor bathroom and traveled upwards through the light shaft, damaging the bathrooms above and portions of the roof, and creating what the Boston Globe described as a “pillar of flame” that rose above the roof.  The fire was contained to the bathroom areas and did not spread to the rest of the building.

In November of 1932 the Boston Safe Deposit and Trust Company, trustee under George C. Brooks’s will, filed for (and subsequently received) permission to increase the number of units from eighteen to nineteen.

In October of 1955, he filed for (and subsequently received) permission to legalize the occupancy as 21 units, the existing condition at that time.

The property again changed hands and on March 22, 1971, was acquired by Anthony C. Primo, James Primo, and John Primo, trustees of the Primo Realty Trust.

In January of 1973, the Primo Realty Trust filed for permission to legalize the occupancy as 30 units. The permit was denied, but the denial was annulled by the Board of Appeal, which noted that the building had been occupied as such for “at least fifteen years.”

On September 30, 1974, they converted the property into thirty condominium units, the 295 Beacon Condominium. 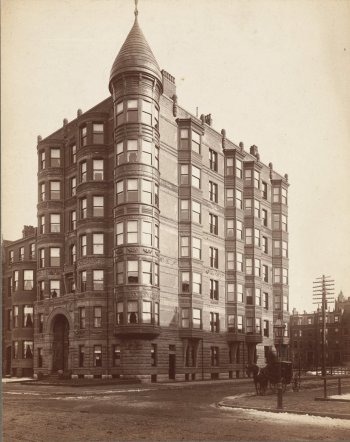