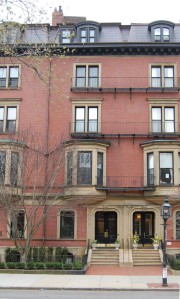 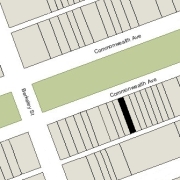 Bunting’s comment echoed the views of the Boston Evening Transcript in its July 14, 1860, article announcing plans for the nine houses:

“A large and elegant block of first class houses will shortly be seen rising in the very center of the filled area, being on the south or left hand side of the broad central avenue, and about half way from Arlington to Berkley [sic] street. Nine of these houses will be similar in height, arrangement, material and external finish – a fact which we record with some wonder – as we had never before believed that nine persons could be found in Boston, who had not some crotchets of their own which they would be sure to prefer to the general uniformity of the streets, or the general welfare and appearance of the city. In this case, the block will form a very marked and striking ornament to the wide avenue on which it is to be placed. We learn that the contracts for these houses have been concluded, and that the works will be commenced next week, Messrs. G. J. F. Bryant and Arthur Gilman, Architects.”

On September 24, 1860, the Boston Post commented on the design of the nine houses, noting that they are “substantially of the same design. The fronts are of handsome pressed brick, and have elegant door-ways, large bay windows, and Cumberland stone trimmings.” 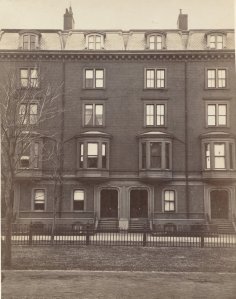 The land on which 20-36 Commonwealth were built was part of a larger tract of land owned by shipping merchant and US Congressman Samuel Hooper. He and his wife, Anne (Sturgis) Hooper, lived at 27 Commonwealth.

On May 2, 1860, Samuel Hooper had purchased two lots on the south side of Commonwealth Avenue from the Commonwealth of Massachusetts, one with a frontage of 78 feet starting with the lot where 20 Commonwealth would be built and extending west, and the other with a frontage of 220 feet extending east from the corner of Commonwealth and Berkeley. On the same day, Nathan Bourne Gibbs, Jr., also a shipping merchant, purchased a lot with a 60 foot frontage between the two lots purchased by Samuel Hooper. On June 22, 1860, Samuel Hooper purchased Nathan Gibbs’s parcel, so that he owned all of the land from 20 Commonwealth to Berkeley Street. He subsequently subdivided the property and sold the lots to different owners, for whom houses were then built. Among the purchasers was Nathan Gibbs, who bought a lot with a 40 foot frontage where he and his wife, Elizabeth Swift (Burgess) Gibbs, built their home at 38 Commonwealth.

Eight of the nine lots where 20-36 Commonwealth were built were sold by Samuel Hooper on July 1 or 2 in 1860 (the ninth lot, for 36 Commonwealth, also was sold at that time but was not conveyed by deed until July of 1862). The buyers contracted with Charles Woodbury and Lemuel Miles Standish, masons, and Jonas Fitch, carpenter and builder, to construct the houses to the designs of Gridley J. F. Bryant and Arthur Gilman. Based on the architectural drawings for 22 Commonwealth, cited by Bunting, and three building contracts filed with the Suffolk County deeds for 26, 28, and 34 Commonwealth, the contracts were executed on July 7, 1860, and specified a deadline for completion of the houses by August 1, 1861.

Click here for an index to the deeds for 30 Commonwealth, and click here for further information about the land between the south side of Commonwealth and Alley 437, from Arlington to Berkeley.

Jonas Fitch, who built the nine houses with Lemuel Miles Standish and Charles Woodbury, purchased the lot where 30 Commonwealth was built, and he and his wife, Catherine (Blodgett) Fitch, made it their home. They previously had lived at 13 Edinburgh. They also maintained a home in Pepperell, Massachusetts.

The Fitches’ son-in-law and daughter, John Wallace and Ann (Fitch) Wallace, lived with them.  He was a boot and shoe merchant in the 1870s, a dry goods merchant by 1880, and a real estate broker by 1885.

Jonas Fitch died in February of 1882. Catherine Fitch and the Wallaces continued to live at 30 Commonwealth until her death in March of 1892. After her death, the Wallaces moved to the Hotel Vendome.

On July 5, 1892, 30 Commonwealth was acquired from the estate of Jonas Fitch by attorney William Warren Vaughan. He and his wife, Ellen Twisleton (Parkman) Vaughan, lived at 354 Beacon. 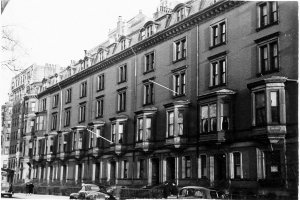 On November 1, 1892, 30 Commonwealth was acquired from William Vaughan by his brother-in-law, Henry Parkman. He and his wife, Mary Frances (Parker) Parkman, made it their home. They previously had lived at 56 Chestnut. They also maintained a home at Smallidge Point in Northeast Harbor on Mt Desert Island in Maine.

Henry Parkman was an attorney and served first as treasurer and then president of the Provident Institution for Savings.

Mary Parkman married in June of 1916 to Rev. Malcolm Endicott Peabody.  After their marriage, they lived in Lawrence, where he was assistant rector of Christ Church.

Henry Parkman, Jr., a lawyer, married in November of 1919 to Margaret Randolph (Anderson) Rotch, the widow of Abbott Lawrence Rotch. She lived at 182 Beacon, where they lived after their marriage.

Edith Parkman married in May of 1920 to William Perkins Homans of 164 Beacon, a representative for textile machinery companies. After their marriage, they lived at 83 Myrtle.

Francis Parkman married in June of 1921 to Eleanor M. Bremer. After their marriage, they lived in Brookline. He was employed with a bank and, in 1925, became an instructor and assistant dean at Harvard. From 1930 to 1942, he was headmaster of St. Mark’s School in Southborough.

Penelope Parkman married in June of 1923 to Roger Griswold, an architect. After their marriage, they lived at 36 West Cedar.

Henry Parkman died in June of 1924.  Mary Frances Parkman continued to live at 30 Commonwealth until her death in July of 1942.  She also maintained a home in Northeast Harbor, Maine.

On December 11, 1942, 30 Commonwealth was acquired from the estate of Henry Parkman by real estate dealer Ray C. Johnson.

On December 24, 1942, 30 Commonwealth was acquired from Ray C. Johnson by Benjamin Franklin Ross and his wife, Tanyia (Tanka) (Anacki) Ross. They previously had lived in Cambridge. by 1945, they had moved to 50 Hereford as lodgers.

On September 5, 1944, 30 Commonwealth was acquired from Benjamin and Tanyia Ross by New England Motors, Inc. Benjamin Ross was treasurer of the company and his brother-in-law, Anthony Anacki, was corporate clerk. 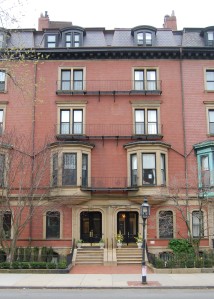 30 Commonwealth was shown as vacant in the 1943 City Directory.

On October 4, 1944, 30 Commonwealth was acquired from New England Motors, Inc., by Ellwood B. Allen and his wife, Eva Helterline (Hilton) Allen. They lived in Belmont. Ellwood and Eva Allen were real estate developers and interior decorators. In the late 1940s, they built a recording studio in the basement of their home in Belmont and established the “Radax” record label, which featured local musicians.

In April of 1945, they applied for (and subsequently received) permission to convert the house into six apartments.

In January of 1979, prior to finalizing her purchase of 30 Commonwealth, Lili Banani had filed for (and subsequently received) permission to convert it into four apartments. On August 3, 1979, she converted the apartments into four condominium units, the 30 Commonwealth Avenue Condominium.