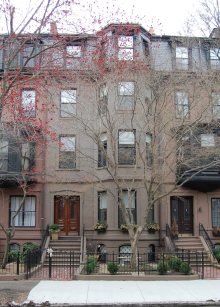 319 Beacon is located on the south side of Beacon, between Exeter and Fairfield, with 315-317 Beacon to the east and 321 Beacon to the west.

311-313-315-317-319 Beacon were built on a 100 foot wide parcel of land originally sold as four 25 foot lots by the Commonwealth of Massachusetts at its public auction on December 24, 1868. Dry goods merchant Eben Dyer Jordan, co-founder of Jordan, Marsh & Co., was the successful bidder for all four lots.

On April 25, 1870, Eben Jordan entered into an agreement with Frederick Pope under which Frederick Pope agreed to build at 311-313 Beacon “two Connecticut freestone front dwelling houses, one house to be twenty-four feet six inches wide, and the other to be seventeen feet in width, and of the dimensions and arrangements described by plans and specifications signed this day.” In the same agreement, Eben Jordan agreed to sell Frederick Pope the remaining land, to the west of 311-313 Beacon, with a frontage of 58 feet six inches.

Click here for an index to the deeds for 319 Beacon, and click here for further information about the land between the south side of Beacon and Alley 417, from Exeter to Fairfield.

Frederick Pope briefly made 319 Beacon his home. He was unmarried. His parents, Samuel and Sarah Stetson (Mellish) Pope, his sister, Sarah Emma Pope, and his brother, Eugene Alexander Pope, lived with him. They all previously had lived in Cambridge. By 1872, they had moved to 309 Beacon.

On October 13, 1871, 319 Beacon was purchased from Frederick Pope by Margaret (Chapin) Bliss, the wife of William Bliss. They previously had lived at 103 Pinckney.

William Bliss was general freight agent of the Boston & Albany Railroad and was named general manager of the company in October of 1874.

The Blisses continued to live at 319 Beacon until about 1874, when they moved to Springfield. In July of 1880, he was elected president of the Boston & Albany. They continued to live in Springfield but from about 1882 also maintained a Boston residence at the Hotel Cluny at 543 Boylston. In May of 1884 they purchased 25 Exeter and made it their Boston home.

On June 29, 1874, 319 Beacon was purchased from Margaret Bliss by Frances Emily (Carruth) Pratt, the wife of Elliott William Pratt. They previously had lived at 9 Beacon.

Elliott Pratt was an organist and music teacher.  By the time of his death, he was a trustee of estates. 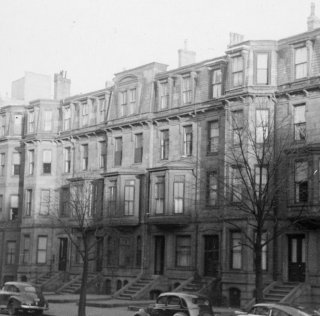 The Pratts’ two children, Emily Frances Pratt and Leslie E. Pratt, lived with them. Leslie Pratt died in June of 1884.

The Pratts were living elsewhere during the 1884-1885 winter season, and 319 Beacon was the home of Sarah Hickling (Webster) Dabney, the widow of John Pomeroy Dabney, a shipping merchant in the Fayal trade.  Their son, John Pomeroy Dabney, Jr., lived with her.  By the next season, she had moved to 3 Mt. Vernon Place, and by the 1887-1888 season she was living at 395 Beacon.  He moved to Chicago.

Elliott Pratt died in February of 1905. Frances Pratt continued to live at 319 Beacon with their daughter, Emily.

Emily Pratt married in November of 1905 to Stephen Bowen, a textile manufacturing engineer and later president of the Saxony Knitting Mills.  He had been married previously, to Annie C. Rose, who died in March of 1900.  After their marriage, Stephen and Emily Bowen and his daughter by his first marriage, Annie Rose Bowen, lived at 319 Beacon with Frances Pratt.

Emily (Pratt) Bowen died in December of 1918.  Stephen Bowen continued to live at 319 Beacon with Frances Pratt.  His daughter, Anne Bowen, lived with them until her marriage in October of 1926 to Atherton Loring, Jr., of Brookline, an engineer.

Frances Pratt died in May of 1929. In her will, she left 319 Beacon to Stephen Bowen, who continued to make it his home.

By the 1930-1931 winter season, Stephen Bowen had been joined by his son-in-law and daughter, Atherton Loring, Jr., and Anne Rose (Bowen) Loring.  They previously had lived in Brockton.  They continued to live with him until the late 1930s, but had moved to Duxbury by 1940.  Atherton Loring was a manager with the New England Telephone & Telegraph Company.

Stephen Bowen continued to live at 319 Beacon until his death in March of 1948.  He also maintained a home in Winter Park, Florida.

On October 20, 1948, 319 Beacon was acquired from Stephen Bowen’s estate by Anne (Anna/Anastasia) French, widow of Arthur Sheldon French. She previously had lived at 395 Marlborough. She operated 319 Beacon as a lodging house (the 1949-1950 Boston Lists of Residents and the 1950 US Census show her under the name Anna Mellor). She continued to live at 319 Beacon until about 1954.

The house was shown as vacant in the 1954 City Directory.

On March 10, 1954, 319 Beacon was acquired from Anne French by Luykx Incorporated (Dirk J. Luykx, president). In February of 1954, Dirk Luykx applied for (and subsequently received) permission to convert the property from a single-family dwelling into ten apartments. He was an architectural draftsman.

The property changed hands and on November 22, 1968, was acquired by Thomas Francis Twomey, trustee of The Plane Trust. He was a commercial airline pilot and lived in Moultonboro, New Hampshire, at the time he purchased the property. Thomas Twomey died in February of 2003, and on November 4, 2004, Carol Fulton, as successor trustee of The Plane Trust, transferred 319 Beacon to Mellon Trust of New England, trustee of the Thomas Francis Twomey Revocable Trust.

On February 27, 2007, 319 Beacon was purchased from the Thomas Francis Twomey Revocable Trust by the 319 Beacon Street LLC (Christopher Buchan, manager of record). In August of 2007, it applied for (and subsequently received) permission to convert the property from ten apartments into two units, including adding a garage in an existing rear ell.

The previous proposed remodeling had not been completed, and in July of 2009, the Hollands filed for (and subsequently received) permission to modify the plans and convert the property from ten apartments into a single-family dwelling.

On October 15, 2009, 319 Beacon was purchased from John Holland and Joseph Holland by Adam M. Zaiger, trustee of the 319 Beacon Street Nominee Trust.