395 Marlborough was designed by architect Samuel D. Kelley and built in 1888 by John W. Shapleigh, builder, for speculative sale, one of three contiguous houses (393-395-397 Marlborough) designed as a single composition, with the central house (395 Marlborough) having a higher and more elaborate façade and the two flanking houses (393 and 397 Marlborough) being identical in design. John Shapleigh is shown as the owner on the original building permit application for 395 Marlborough, dated January 16, 1888.

In his Houses of Boston’s Back Bay, Bainbridge Bunting erroneously states that 393-395-397 Marlborough were built in 1883. In fact, the land for the houses was not purchased by John Shapleigh until late 1887 and the original building permit applications for all three houses were filed in 1888. Bunting also does not attribute the buildings to a specific architect.  However, the final building inspection report for 393 Marlborough indicates the architect was Samuel D. Kelley and includes a floor plan for the second floor labeled “383-395-397 Marlboro St – 1888” signed by Samuel Kelley.

The land originally had been intersected by Parker Street, a 60 foot wide street located on top of the Cross Dam, which ran southwest from Beacon at approximately a 45 degree angle, intersecting the north side of Marlborough at a point about 355 feet west of Hereford. The land to the east of Parker Street had been purchased on June 12, 1868, from the Boston Water Power Company by Daniel Davies, and the land to the west of Parker Street had been purchased from the company on March 1, 1872, by a real estate investment trust formed by Grenville T. W. Braman, Henry D. Hyde, and Frank W. Andrews. In the late 1870s, Parker Street was abandoned and Daniel Davies and the real estate investment trust jointly purchased the land under the roadway. Through a series of transactions, the owners traded triangular shaped lots to “square off” their holdings. The dividing line between the two parcels was 360.58 feet west of Hereford (resulting in the 0.58 foot lot which John Shapleigh ultimately purchased from George Wheatland, Sr.). 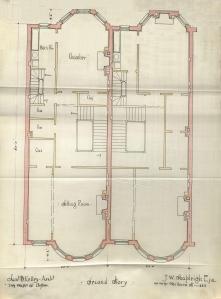 Click here for an index to the deeds for 395 Marlborough, and click here for further information on the land on the north side of Marlborough between Hereford and Massachusetts Avenue.

On October 1, 1888, 395 Marlborough was purchased from John Shapleigh by Arthur Burnham. He and his wife, Katherine Davenport (Bray) Burnham, made it their home. They previously had lived at 52 Morland.

Arthur Burnham was president of the National City Bank of Boston until January of 1889, after which he was a broker.

In the summer of 1896, Arthur Burnham advertised 395 Marlborough for sale in the Boston Evening Transcript, describing it as a “modern four-story house; 14 rooms; parlor, reception hall with fireplace, and dining-room on first floor.”

The house did not sell and the Burnhams continued to live there during the 1896-1897 winter season, but moved thereafter to an apartment at 407 Marlborough.

On September 4, 1897, 395 Marlborough was acquired from Arthur Burnham by Mary Calista (Morgan) Devan Beard, the wife of Alanson Wilder Beard. They previously had lived in Belmont and, during the 1893-1894 winter season, at The Charlesgate at 535 Beacon.

A wholesale clothier, Alanson Beard served as Massachusetts State Treasurer in 1886-1888, and twice as Collector for the Port of Boston.

Alanson Beard died in August of 1900. Mary Beard continued to live at 395 Marlborough.

On October 12, 1904, Mary Beard transferred 395 Marlborough to William Rodney Feelyater, and they were married the next day. At the time of their marriage, he indicated that he was employed as a private secretary and that his address was 395 Marlborough. They moved soon thereafter, probably to Brooklyn, New York, where she was living at the time of her death in 1908. He continued to own 395 Marlborough and lease it to others.

The house was not listed in the 1905 Blue Book.

By the 1905-1906 winter season, 395 Marlborough was the home of Frank Herbert Thayer and his wife, Alice Augusta (Waterman) Thayer.  They previously had lived in Malden. He was a shoe manufacturer with his father’s firm, N. B. Thayer & Co.

Living with them were Alice Thayer’s mother, Sarah Luella (Morrison) Waterman, the widow of Arthur Osceola Waterman, and brothers, William Edgar Waterman, president of a cigar manufacturing company, and Dr. George Arthur Waterman, a neurologist.  Dr. Waterman also maintained his medical office at 395 Marlborough.  Sarah Waterman and William Waterman previously had lived in Malden, where Arthur Waterman had died in March of 1905.  George Waterman previously had lived and maintained his medical office at 220 Marlborough.

Sarah Waterman died in November of 1906.  The Thayers, George Waterman, and William Waterman continued to live at 395 Marlborough during the 1911-1912 winter season.

George Waterman married in June of 1912 to Claire N. Forrest and they moved to 410 Beacon.  William Waterman moved with them, and Frank and Alice Thayer moved to 21 Bay State Road.

On October 20, 1914, 395 Marlborough was purchased from William Feelyater by Clara Morgan (Rotch) Frothingham, the wife of Dr. Channing Frothingham, Jr. They previously had lived at 51 Hereford. They also maintained a home in Walpole.

Dr. and Mrs. Frothingham continued to live at 395 Marlborough during the 1930-1931 winter season, but moved thereafter to 157 Bay State Road.

On August 3, 1931, 395 Marlborough was acquired from Clara Frothingham by William J. Sullivan. On February 29, 1932, he transferred the property to the Massachusetts Hospital Life Insurance Company, which held the first mortgage on the property.

On March 15, 1932, 395 Marlborough was acquired from Massachusetts Hospital Life Insurance by Maybelle Adamson, and on December 1, 1932, the company foreclosed on her mortgage and took back of the property.

On May 23, 1933, 395 Marlborough was acquired from Massachusetts Hospital Life Insurance by Lewis N. Taber, a salesman, and his wife, Margaret (Stevens) Taber. They previously had been lodgers at 425 Marlborough, and several of the other lodgers who had lived there moved with them to 395 Marlborough.

On August 28, 1934, Massachusetts Hospital Life Insurance foreclosed on the Tabers’ mortgage and took possession of the property. The Tabers moved and by 1939 were living in Norwich, Connecticut. 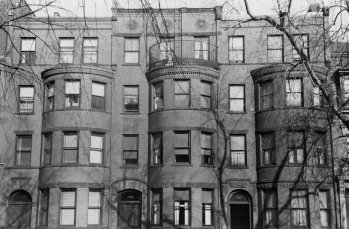 By 1935, 395 Marlborough was the home of Bror Oscar Dahlberg and his wife, Frances (Button) Dahlberg, who operated it as a lodging house. They previously had been lodgers at 527 Beacon.  Several of the other residents of 527 Beacon moved to 395 Marlborough at the same time as the Dahlbergs.  The Dahlbergs continued to live at 395 Marlborough until about 1936. They subsequently moved to Canada, probably to Newfoundland, where Frances Dahlberg was born. By 1939, they were living at 219 Newbury, where they remained until 1941, when they purchased and moved to 294 Commonwealth.

By 1937, 395 Marlborough was the home of Alfred T. Oxton, a salesman, and his wife, Hannah K. (Brett) Oxton, who operated it as a lodging house. They previously had lived in Florida. They continued to live at 395 Marlborough until about 1940, when they moved to an apartment at 27½ Massachusetts Avenue.

On May 27, 1940, 395 Marlborough was purchased from Massachusetts Hospital Life Insurance by George Emules LeTendre and his wife, Rose (Sylva) LeTendre. They operated it as a lodging house. They lived at 336 Commonwealth, where they also operated a lodging house.

On April 11, 1946, 395 Marlborough was acquired from the LeTendres by Herbert Johnson Downs, a postal clerk, and his wife, Lettie (Letricia) Irene (Reed) Downs. They lived in Roxbury. On June 30, 1947, the property was acquired from Herbert Downs by Warren-Roxbury Realty Inc. He was treasurer of the company.

The property changed hands, remaining a multiple dwelling, probably a lodging house, during the late 1940s and early 1950s.

On June 26, 1952, 395 Marlborough was acquired by Louise Marie (Gautreau) Geldart Brideau, the wife of Bernard Brideau. They lived at 389 Marlborough, where they operated a lodging house.

From about 1953, there were nine residents listed at 395 Marlborough in the City Directories, and it appears that the property was being occupied as a nine unit apartment building.  The legal occupancy was not changed, however, and the building was shown as a lodging house on various permit applications filed during the 1950s.

On April 27, 1956, 395 Marlborough was purchased from Louise Brideau by Elizabeth (Andersen) MacKenzie, the widow of John Pettibone MacKenzie. She previously had lived in Stamford, Connecticut. She lived in one of the apartments until about 1962, when she moved to 462 Beacon.

On June 30, 1960, 395 Marlborough was acquired from Elizabeth MacKenzie by Ralph S. Cohen, trustee of the Dexter Realty Trust. On August 15, 1960, he filed a certificate of ownership with the Building Department indicating that the property consisted of nine apartments. In its verification of occupancy, the Building Department indicated that the legal occupancy of record was as a single-family dwelling.

On February 1, 1962, 395 Marlborough was purchased from Ralph Cohen by Paul Jerome Zirkle, Jr., and his wife, Patricia Marie (Powell) Zirkle. In June of 1962, he filed for permission to legalize the property as a nine-unit apartment house, indicating that he was under the impression that was the legal occupancy when he purchased the building. The application was approved but Mr. Zirkle failed to provide the necessary egress to allow the building to be used as apartments.

On February 7, 1963, 395 Marlborough was purchased from the Zirkles by Dr. Louis Burton Benjamin, a physician, and his wife, Constance T. (Potter) Benjamin. On June 12, 1963, they transferred the property into his name as trustee of the Benjamin Realty Trust. In March of 1964, he filed for (and subsequently received) permission to legalize the property as a nine-unit apartment building.

On August 12, 2009, it converted the property into nine condominium units, the Heaven on Marlborough Condominium.