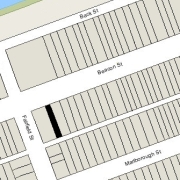 345 Beacon is located on the south side of Beacon, between Exeter and Fairfield, with 343 Beacon to the east and 347 Beacon to the west.

The land on which 343-345 Beacon were built was purchased by Frederick Pope on March 5, 1872, from real estate dealer Henry Whitwell. At the same time, he also purchased an equivalent lot from Henry Whitwell across the alley, fronting on Marlborough, where he built 277–279 Marlborough. The land was part of a larger parcel originally purchased from the Boston Water Power Company on February 16, 1863, by Daniel Davies, Jarvis Dwight Braman, and Grenville Temple Winthrop Braman. Grenville Braman was treasurer of the Boston Water Power Company, Jarvis Braman was his brother (and later president of the company), and Daniel Davies, a housewright and master carpenter, was Grenville Braman’s father-in-law.

343-345 Beacon were subject to mortgages held by George A. Gibson (which also included 277-279 Marlborough) and by James C. Ayer, Frederick Ayer, and Albert G. Cook.  On September 12, 1874, James C. Ayer and his associates offered their interest in the houses for sale at a public auction held by auctioneer George M. Atwood & Co. The property did not sell.

On October 5, 1874, 343-345 Beacon were again offered for sale at public auction.  A September 28, 1874, advertisement in the Boston Traveller by the auctioneer, Samuel Hatch & Co., described 343 Beacon as a “beautiful new brown stone front house,” noting that “on the main entrance floor is an elaborate drawing room, dining room, library, and large Hall with fire-place” and that the house “contains 13 chambers” on five stories.  The same advertisement described 345 Beacon as a “genteel and new brown stone front house … finished in hard wood and has been constructed in the most thorough manner with all modern improvements.”

343 Beacon was not sold, but according to an October 7, 1874, Boston Globe report, 345 Beacon was purchased by Joseph E. Merrill. He was treasurer of the New England News Company.  He did not take title to the property.

Through a series of transactions in the fall of 1875,Frederick Pope’s brother, Eugene Alexander Pope, acquired 343 Beacon and George A. Gibson acquired 345 Beacon.

On March 14, 1876, 345 Beacon was purchased from George Gibson by Anna M. (Towne) Parks, the wife of house carpenter and builder Elwell Parks. They previously had lived at 22 Joy. They operated 345 Beacon as a lodging house

Elwell and Anna Parks continued to live at 345 Beacon until about 1888, when they moved to 8 Westland.

On October 6, 1888, 345 Beacon was purchased from Annie Parks by Mary Perkins (Briggs) Greene, the wife of Robert Brayton Greene, a retired whaling merchant. They previously had lived in New Bedford. Their four unmarried daughters — Mary P. B. Greene, Frances B. Greene, Nellie L. Greene, and Catherine L. Greene — lived with them. 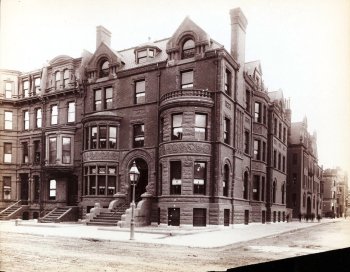 After their deaths, Mary P. B. Greene, returned to Boston and lived at 345 Beacon in until about 1906.  She then returned to Europe, but continued to own the house.  She was a resident of Brussels in 1917.

Mary P. B. Greene died in April of 1918. In her will, she left 345 Beacon to Samuel Lawrence Bigelow of Ann Arbor, Michigan, “in memory of the faithful devotion of his late mother, Ella H. Bigelow, to my family.” Ella H. (Brown) Bigelow was the wife of Samuel A. Bigelow, a wholesale hardware merchant; she died in March of 1893.

On June 19, 1920, Colette (Dumaresq) Whitney, the wife of stockbroker Charles Handasyde Whitney, purchased 345 Beacon from Samuel Lawrence Bigelow. The Whitneys previously had lived at 164 Riverway. They also maintained a home at Mattapoisett.

On July 12, 1928, 345 Beacon was purchased from Colette Whitney by Charles Hall Bowles, an osteopathic physician. He lived in Plymouth, New Hampshire, where he married in October of 1928 to Laura Currier. After their marriage, they lived in Plymouth with his parents, Dr. George Hall Bowles and Caroline Ellsworth (Blount) Bowles.

In 1929, 345 Beacon became an annex of the Old Colony School located at 315-317 Beacon, which provided secretarial and business management training for women. In September of 1929, the school applied for (and subsequently received) permission to remodel the interior and convert the property from a single-family dwelling into a private school.

The school remained there until about 1932.

On August 30, 1932, the Boston Penny Savings Bank foreclosed on its mortgage to Charles Bowles. On the same day, it transferred the property back to Dr. Bowles, who negotiated a new mortgage with the bank.

On May 6, 1933, 345 Beacon was purchased from Charles Bowles by Miss Anna G. Sullivan, who maintained it as a lodging house. Earlier in 1933, she had lived and kept a lodging house at 293 Marlborough.  In May of 1933, she applied for (and subsequently received) permission to remodel the interior of 345 Beacon.  On the application, she indicated the current and proposed use was as a lodging house.  She continued to live there until about 1946.

The property was shown as vacant in the 1948 City Directory.

On September 17, 1948, 345 Beacon was acquired from Catherine Brennan by Carroll L. Lord and Benedict Gerard Groder. They operated it as a lodging house.

On July 12, 1999, 345 Beacon was purchased from the Lanfords by James J. Mullaney and his wife, Susan Gols Mullaney.

The property subsequently changed hands. It remained assessed as a single-family dwelling in 2020.