379 Commonwealth was designed and built by O. H. Drisko and Son, architects and builders, one of two contiguous houses (377-379 Commonwealth) built for building contractor and real estate dealer Albion Knowlton. He is shown as the owner on both of the original building permit applications, dated April 2, 1889, and on the final building inspection reports, dated October 25, 1889.

As originally laid out, the portion of Commonwealth between Massachusetts Avenue and Charlesgate East had a curved roadway intended to provide a transition from the formal design of the preceding blocks to the parklands in the Back Bay fens. It was divided into uneven islands and included a strip of green space in front of 371-387 Commonwealth and a small triangular island at the eastern end on which the statue of Leif Ericson (Erikson) was located (dedicated in 1887). In 1917-1918, the roadway was straightened and widened, the central mall design of the previous blocks was extended to Charlesgate East, the green space in front of 371-387 Commonwealth eliminated, and the Ericson statue was relocated to the Charlesgate East end of the block.

Josiah B. Kendall was a real estate dealer and formerly had been a hide and leather merchant and then a granite dealer. He and his wife, Elizabeth (McPherson) Kendall, lived at 389 Commonwealth. 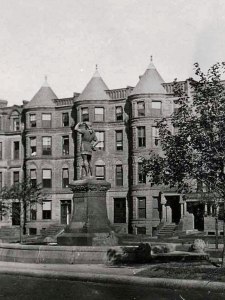 By the 1889-1890 winter season, Edwin and Mary Frances (Smith) Woods, had made 379 Commonwealth their home.  They previously had lived at 113 Appleton. They also maintained a home in Cohasset.

Edwin Woods was president and business manager, and later publisher and treasurer, of the Boston Herald.

Edwin Woods retired from the Boston Herald in about 1905 and became vice-president and a director of the Napier Motor Car Company of America, with offices located at 743 Boylston. His sons also were associated with the firm.

Edwin Woods died in October of 1910. Mary Woods continued to live at 379 Commonwealth during the 1911-1912 winter season, but moved thereafter to Brookline.

On May 1, 1912, 379 Commonwealth was purchased from Mary Woods by Dr. Marshal Fabyan. He and his wife, Eleanor Harryman (McCormick) Fabyan, made it their home. They previously had lived at 381 Commonwealth. They also maintained a home in Beverly Farms.

Marshal Fabyan was a physician and an instructor and later assistant professor at Harvard Medical School. He maintained his medical office at 379 Commonwealth.

On April 30, 1953, 379 Commonwealth was purchased from Marshal Fabyan’s estate by the Briggs Realty Corporation. Prior to taking title to the property, Saul Bernhardt Levitan, treasurer of Brigg’s Realty, filed for (and subsequently received) permission to convert 379 Commonwealth from a single family dwelling into ten apartments.

Saul Levitan was a jeweler and real estate investor who lived at 197 Marlborough with his wife, Eleanor Helen (Hirsch) Mitnick Levitan. He died in October of 1953.

On May 8, 1997, Briggs Realty Corporation (James A. Golden, president and treasurer) transferred 379 Commonwealth to the Briggs Realty LLC.

379 Commonwealth remained an apartment house in 2018. 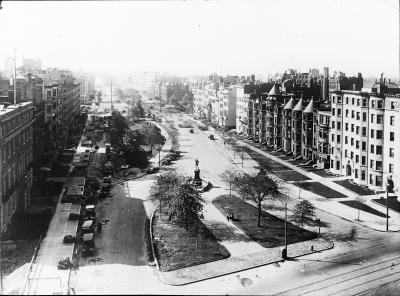 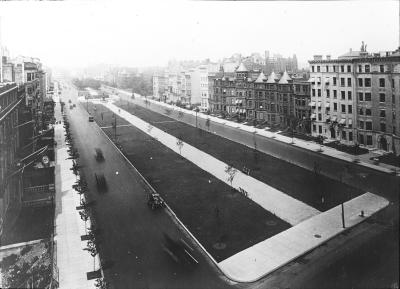