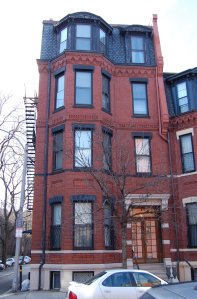 11 Hereford was designed by Alfred S. Bither, architect, and built in 1879-1880 by Edward E. Chapin, mason, for real estate dealer Henry Whitwell on land owned by his brother and partner, Samuel Horatio Whitwell, one of four contiguous houses (435 Beacon and 7-9-11 Hereford) built for speculative sale. Henry Whitwell is shown as the owner on the original building permit applications for 435 Beacon and 7-9-11 Hereford (one application for three houses), both dated December 13, 1879.

In his Houses of Boston’s Back Bay, Bainbridge Bunting indicates that all four houses “were planned as two stories with a mansard roof. Fourth stories were added for purchasers to two of the four houses [7 Hereford and 11 Hereford] by the speculative builder before the row was finished.” Bunting does not indicate his source for concluding that the additional stories at 7 Hereford and 11 Hereford were added before the houses were completed, but this information may have been shown on the final building inspection reports, to which he may have had access (the reports no longer are available). However, the insurance maps for the period imply that the additional stories were added somewhat later: the 1887 Sanborn map shows all four houses as being two stories with a mansard roof, whereas the 1897 Sanborn map shows the addition of the extra floors at 7 Hereford and 11 Hereford.

Bunting also indicates that 435 Beacon, 7-9-11 Hereford, 364 Marlborough, 27-29-31 Hereford, and 216-218 Commonwealth – all built in 1879 – were designed by R. S. Bither. This is a misreading of the handwriting on the permit applications. It is clearly written as “A. S. Bither” on several of the permit applications, and is less legible on several others. There was no R. S. Bither listed in the Boston City Directories at any time in the 1870s or 1880s, whereas Alfred S. Bither was a practicing architect in Boston from 1870 to 1880.

Samuel H. Whitwell purchased the land for 435 Beacon and 7-9-11 Hereford on November 29, 1879, from Edwin Markland White. He had purchased the land on October 24, 1879, from the estate of Daniel Davies, a housewright and master carpenter who had died in June of 1878. He and his wife, Amity Bacon (Hastings) Davies, had lived at 449 Beacon. The land was part of a larger parcel Daniel Davies had purchased on June 20, 1866, from the Boston Water Power Company (Daniel and Amity Davies’s daughter, Susan, was the wife of Grenville Temple Winthrop Braman, treasurer of the Boston Water Power Company).

Click here for an index to the deeds for 11 Hereford, and click here for further information on the land on the south side of Beacon between Hereford and Massachusetts Avenue.

When he sold the houses at 7-9-11 Hereford, Samuel Whitwell included in the deeds a four foot wide easement across the western boundaries of 9-11 Hereford to provide access to the alley for 7-9-11 Hereford.

On March 1, 1881, 11 Hereford was purchased from Samuel Whitwell by Miss Elizabeth Upton. She previously had lived at 79 Beacon. She also maintained a home in Dublin, New Hampshire. Her sister, Ellen Upton, lived with her at 11 Hereford through the 1885-1886 winter season, but moved thereafter and by the 1887-1888 season was living at 171 Marlborough with their widowed brother, George Bruce Upton, Jr.

By the 1892-1893, Elizabeth Upton had been joined at 11 Hereford by her brother, George and his new wife, Alice (Henderson) Huntington Upton. They had married in April of1890, after which they had lived in Milton.

Elizabeth Upton died in November of 1894. In her will, she left 11 Hereford as part of her residual estate to her brother, George, and sister, Ellen.

George and Alice Upton continued to live at 11 Hereford during the 1894-1895 winter season, but moved thereafter.

On January 22, 1895, 11 Hereford was purchased from George Upton and Ellen Upton by Misses Helen Hurd, Rebecca G. Hurd, Elizabeth Hurd, and Catharine Hurd, the daughters of William Hurd and his wife, Mary (Parks) Hurd. They previously had lived in Charlestown.

Elizabeth Hurd continued to live at 11 Hereford until her death in October of 1922.

The house was not listed in the 1923 Blue Book.

On January 22, 1923, 11 Herford was acquired from Elizabeth Hurd’s estate by real estate dealer William J. Stober; he conveyed the property the next day to Alice Eliza (Adams) Hardy, the wife of Charles Ashley Hardy, a mining engineer. The Hardys previously had lived in an apartment at 295 Commonwealth.

The Hardys also maintained a home in Chatham, where he invested in real estate and, with several colleagues (known as the Chatham Associates) built and owned the Chatham Bars Inn, which opened in 1914.

On November 7, 1924, Alice Hardy transferred 11 Hereford to her husband as trustee under the will of his mother, Elizabeth Randolph (Bates) Hardy.

The Hardys continued to live at 11 Hereford until about 1928, when they made Chatham their year-round home.  He died in December of 1929 as a result of an accidentally self-inflicted gunshot wound.

On November 20, 1928, 11 Hereford was acquired from Charles Hardy by Charlotte (Wilson) White, the wife of attorney William Frye White. They previously had lived in Medford. They also maintained a home at Squirrel Island, Maine.

In December of 1928, he applied for (and subsequently received) permission to remodel the house.

By 1933, William White had been joined at 11 Hereford by his son-in-law and daughter, Lawrence Clayton Warren and Elizabeth Frye (White) Warren.  Lawrence Warren was a leather salesman.

They also were joined by William White’s brother-in-law, Claggett Wilson.  He was a noted modernist artist and stage designer.

William White, Claggett Wilson, and the Warrens continued to live at 11 Hereford, joined in about 1937 by William White’s son-in-law and daughter, Robert White Frost and Charlotte Wilson (White) Frost.  They all moved by 1938.

In June of 1938, William White, as trustee for the estate of Charlotte White, filed for (and subsequently received) permission to convert the property from a single-family dwelling into a lodging house.

On July 13, 1940, the State Street Trust Company foreclosed on the mortgage given by Charlotte White when she purchased 11 Hereford, and took possession of the property.

On August 30, 1940, 11 Hereford was acquired from State Street Trust by Louis J. Binda. He was an elevator starter at a downtown Boston building who frequently held property for various other owners. He was unmarried and lived in Roxbury and later in Cambridge.

On February 19, 1941, 11 Hereford was acquired from Louis Binda by Miss Tena MacRae, who continued to operate it as a lodging house. She previously had lived in Brookline.

Tena MacRae continued to live and operate a lodging house at 11 Hereford until her death in September of 1975.

On April 8, 1976, 11 Hereford was acquired from Tena MacRae’s estate by Annie Kate O’Hara. She continued to operate the property as a lodging house until her death in May of 2004.

On September 30, 2004, 11 Hereford was acquired from Annie Kate O’Hara’s estate by the 11 Hereford LLC (Marie B. Cooney, manager). In September of 2006, Marie Cooney filed for (and subsequently received) permission to increase the number of lodgers from six to eight.

On April 29, 2008, 11 Hereford was purchased from the 11 Hereford LLC by the Hereford Street RE LLC (David Alex-Barton, manager).