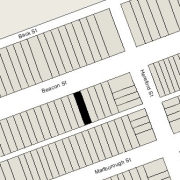 449 Beacon is located on the south side of Beacon, between Hereford and Massachusetts Avenue, with 447 Beacon to the east and 451 Beacon to the west.

449 Beacon was built by Daniel Davies, a housewright and carpenter, one of four contiguous houses, three (443-445-447 Beacon) built in 1872-1873 and the fourth (449 Beacon) built in 1876. They were the first houses built on Beacon west of Hereford. The original building permit application for 443-445-447 Beacon no longer is available (and probably was destroyed in the November 9, 1872, Boston fire), but Daniel Davies & Son is shown as the owner of the three houses in the Boston Globe’s September 14, 1872, report on approval of the permits. Daniel Davies is shown as the owner and Daniel Davies & Son as the builder on the original building permit application for 449 Beacon, dated July 20, 1876, and on the final building inspection report dated December 29, 1876.

In his Houses of Boston’s Back Bay, Bainbridge Bunting indicates that Charles Davis was the architect for 443-445-447-449 Beacon. There was no architect named Charles Davis listed in the Boston City Directories during this period, and Bunting probably was referring to Charles H. Davies, Daniel Davies’s son. He was in partnership with his father and, although not trained as an architect, may have designed the houses.

443-445-447-449 Beacon were built on part of a parcel of land that Daniel Davies purchased on June 20, 1866, from the Boston Water Power Company. The parcel included all of the land between Hereford and Parker Street. Parker Street was located on top of the Cross Dam and ran southwest at approximately a 45 degree angle, starting about 210 feet west of Hereford on the south side of Beacon. The street was 60 feet wide. All of the land to the west, between Parker Street and West Chester Park (Massachusetts Avenue), was purchased from the Boston Water Power Company on March 1, 1872, by a real estate investment trust formed by Grenville Temple Winthrop Braman (who was Daniel Davies’s son-in-law), Henry Dwight Hyde, and Frank William Andrews. In the late 1870s, Parker Street was abandoned and on April 30, 1878, Daniel Davies joined with Grenville Braman and his partners to acquire the land under the roadway from the Boston Water Power Company. Daniel Davies died in June of 1878, and on February 1, 1879, his heirs and Grenville Braman and his partners entered into a series of transactions to “square off” their holdings by exchanging triangular shaped lots, resulting in a north-south dividing line 265 feet west of Hereford.

Click here for an index to the deeds for 449 Beacon, and click here for further information on the land on the south side of Beacon between Hereford and Massachusetts Avenue.

Daniel Davies and his wife, Amity Bacon (Hastings) Davies, made 445 Beacon their home. Their son, Charles Davies, a widower, lived with them. They all previously had lived at 131 Mt. Vernon. 447 Beacon became the home of the Davies’s son-in-law and daughter, Grenville Temple Winthrop Braman and Susan (Davies) Braman, and 443 Beacon became the home of Grenville Braman’s brother and sister-in-law, Jarvis Dwight Braman and Amelia Coverley (Finnegan) Braman. Grenville Braman had been treasurer of the Boston Water Power Company in the 1860s and was a trustee of the real estate investment group that purchased large tracts of the company’s Back Bay lands. Jarvis Braman was associated with his brother in various real estate ventures and served as president of the Boston Water Power Company from mid-1878 until his death in 1888.

In 1877, Daniel and Amity Davies moved from 445 Beacon to the newly-completed house at 449 Beacon.

Daniel Davies died in June of 1878, and Amity Davies moved soon thereafter to the Hotel Dorchester, where she was living at the time of the 1880 US Census with her sister, Sylvania (Hastings) Cox, the widow of Rufus Cox.

On November 5/7, 1879, 449 Beacon was acquired from Amity Davies and from Daniel Davies’s estate by Anne (Lodge) Dorr, the widow of Alfred Dorr, and their unmarried son, Clarence Alfred Dorr, a stock and note broker.

They continued to live at 449 Beacon during the 1881-1882 winter season, but moved thereafter to a new home they had built next door, at 451 Beacon.

On December 28, 1881, 449 Beacon was purchased from Anne Dorr by Oliver L. Briggs. He and his wife, Mary (Stone) Briggs, made it their home. They previously had lived at 111 Chandler. He was a billiard table manufacturer.

Their son, Frederick Huntington Briggs, lived with them. He was associated with his father’s billiard table company. He married in August of 1891 to Ada Lena Langley. After their marriage, they lived with his parents at 449 Beacon.

Frederick and Ada Briggs continued to live at 449 Beacon. They also maintained a home in Auburndale. He continued as a manufacturer of billiard tables and in July of 1924 was named president of the Boston Penny Savings Bank.

Frederick Briggs died in February of 1936.  Ada Briggs continued to live at 449 Beacon until about 1942, after which she lived at her home in Auburndale.

On May 12, 1944, 449 Beacon was acquired from Ada Briggs by real estate dealer Joseph P. Brennan, and on May 15, 1944, it was acquired from him by Israel Ramler. He was president of the State Electric and Lock Shop, and lived in Roxbury.

Israel Ramler died in July of 1948. 449 Beacon continued to be owned by his estate, and Mary Henry continued to live and operate a lodging house there until about 1951.

In March of 1951, 449 Beacon was acquired from Israel Ramler’s mother, Fanny (Kramer) Ramler, the widow of Abraham Kramer, whom he had named as his sole heir, and from the administrators of his estate, by Mrs. Bertha (Cohen) Miller, the former wife of Eli (Elias/Elijah) Miller.

Bertha Miller was a social worker with the Massachusetts Department of Welfare, and previously had lived in Brookline. She operated 449 Beacon as a lodging house.

She continued to live at 449 Beacon and operate it as a lodging house until about 1956, but moved thereafter to an apartment at 855 Beacon.

On January 6, 1958, 449 Beacon was acquired from Saul and Myer Kessler by the Joseph Vincent Realty Corporation. In May of 1958, it applied for (and subsequently received) permission to convert the property from a lodging house into ten apartments.

On February 27, 1959, 449 Beacon was acquired from the Joseph Vincent Realty Corporation by Albert Leo Hollingdale and his wife, Margaret E. (Tabor) Hollingdale. They lived at 82 Bay State Road, and also owned and operated lodging houses/dormitories at 517–519 Beacon and 425–427 Marlborough.

On May 3, 1960, 449 Beacon was acquired from the Hollingdales by Ara Levon Barmakian, a jeweler. He and his wife, Natalie (Gazoorian) Barmakian, lived in Belmont.

In September of 1987, his brother, Diran Barmakian, filed for (and subsequently received) permission to convert the property from ten apartments to nine apartments.

On May 11, 1988, Ara Barmakian converted the property into nine condominium units, the 449 Beacon Street Condominium.