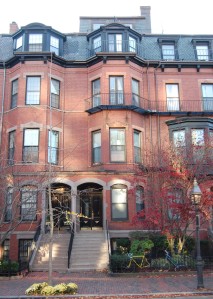 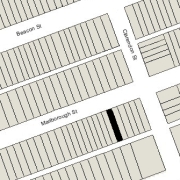 112 Marlborough was built in 1868 by Ivory Harmon, mason and builder, for Charles William Freeland, one of eleven contiguous houses (110-130 Marlborough) built for speculative sale on a parcel with a 198 foot frontage. Charles Freeland was a merchant, cotton manufacturer, and real estate developer. He and his wife, Sarah Ward (Harrington) Freeland, lived at 117 Beacon.

Click here for an index to the deeds for 112 Marlborough, and click here for further information about the land between the south side of Marlborough and Alley 424, from Clarendon to Dartmouth.

On June 1, 1869, 112 Marlborough was purchased from Charles Freeland by Warren L. Tower, a dealer in shoe manufacturers’ findings. He and his wife, Lucinda P. (Stoddard) Tower, made it their home. They previously had lived at 13 Walnut. They continued to live at 112 Marlborough in 1871, but had moved to the Commonwealth Hotel by 1872.

Elizabeth Danforth died in November of 1885.  Mary Danforth continued to live at 112 Marlborough until her death in March of 1889.

Samuel Torrey Morse was a shipping merchant. He and his wife, Harriet Jackson (Lee) Morse, lived at 12 Marlborough.

112 Marlborough became the home of their son and daughter-in-law, Dr. Henry Lee Morse and Jessie Frances (Scott) Morse. He was a physician specializing in ear, nose, and throat diseases, and also maintained his medical office there. They previously had lived at 160 Mt. Vernon and he had maintained his office at 109 Boylston.

Samuel T. Morse died in November of 1890. The property remained in his estate.

Jessie Morse died in October of 1909. Henry Morse continued to live at 112 Marlborough with their daughter, Jessie Gwendolen Morse.

Henry Morse and his daughter continued to live at 112 Marlborough during the 1913-1914 winter season, but moved soon thereafter, probably to Medfield, where they were living on a farm in 1920.

During the 1915-1916 and 1916-1917 winter seasons, 112 Marlborough was the home of Francis William Bird and his wife, Margery Willard (Phelps) Bird.  A former attorney in New York City, Francis Bird was editor and publisher of the Advertiser newspaper. The firm was sold to William Randolph Hearst in November of 1917.

By the 1918-1919 winter season, 112 Marlborough was the home of  Dr. James Dellinger Barney, a urologist, and his wife, Margaret (Higginson) Barney.  They previously had lived at 80 Marlborough.  He maintained his office at 99 Commonwealth (260 Clarendon).  They continued to live at 112 Marlborough during the 1920-1921 season, but moved thereafter to 87 Marlborough.

By the 1921-1922 winter season, 112 Marlborough was the home of Dr. Benjamin Harrison Ragle and his wife, Marguerite (Williams) Ragle.  B. Harrison Ragle was a physician.  He was personal physician to Admiral Richard Evelyn Byrd, Jr., and was a consultant on medical matters to Byrd’s 1939-1941 exploration of the Antarctic.  Ragle Glacier in Antarctica is named in his honor.

On April 15, 1924, 112 Marlborough was purchased from Jessie Gwendolen Morse by real estate dealer Franklin Goldthwaite Sherrill. He was unmarried and lived there with his mother, Maria Knox (Mills) Sherrill, the widow of Henry Williams Sherrill.

The property changed hands and was operated as a lodging house, although it lacked the egress required for that purpose.

On July 15, 1937, 112 Marlborough was acquired by Ingeborg G. Nielsen. She also owned 114 Marlborough, where she lived and operated a lodging house.

In January of 1938, she applied for (and subsequently received) permission to legalize the occupancy of 112 Marlborough as a lodging house and to cut doors in the party wall with 114 Marlborough to connect the two buildings.

Ingeborg Nielsen continued to live at 114 Marlborough and operate the two properties as a lodging house until the early 1950s.

On September 21, 1954, 112-114 Marlborough were acquired from the estate of Walter Eldredge by Miss Grace (Grajia) J. Inferrera. She lived at 112 Marlborough and operated both properties as lodging houses.

On October 27, 1964, 112-114 Marlborough were acquired from Grace Inferrera by Frederick Rosenbaum, trustee of the Clark Realty Trust.

In June of 1996, he applied for permission to convert 112 Marlborough from a lodging house for fourteen people into fourteen apartments. His application was denied and his appeal was dismissed by the Board of Appeal.