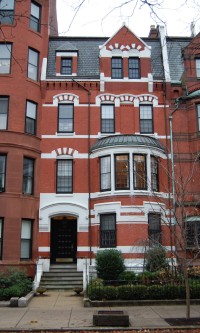 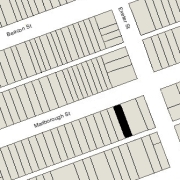 226 Marlborough was designed by architect William Whitney Lewis and built in 1881-1882 as the home and medical office of Dr. Clarence John Blake and his wife, Frances (Hughes) Blake. He was a physician, aural surgeon, and professor of otology at Harvard Medical School. They previously had lived at 19 St. James Avenue.

On October 25, 1879, the Commonwealth of Massachusetts entered into an agreement with Clarence Blake to sell him the land at 226 Marlborough. On December 8, 1879, he entered into a party wall agreement with Dr. William F. Whitney, Jr., who had contracted to purchase the land at 228 Marlborough. Clarence Blake purchased and took title to the land from the Commonwealth on September 29, 1881.

Click here for an index to the deeds for 226 Marlborough, and click here for further information about the land between the south side of Marlborough and Alley 426, from Exeter to Fairfield.

A September 10, 1882, Boston Globe article described the new house in some detail, noting that “the peculiarity of its internal construction arises from the needs of the profession of its owner, and merit therefore a particular description.”

“The building is of brick and freestone, and has four stories and a basement.  It presents a handsome face to the street.  The entrance is upon your left as you face the house, while upon your right is a swell front extending up two stories, with an arched window above in the upper story to carry out the effect. In the lower projection the windows are in groups of three in the first story and the same in the second, although in the last case the central window is only an ornamental ‘sunk panel.’ The doctor’s office enjoys the benefit of the bay window in the first story and the sitting-room in the second.  Brown stone steps lead to the entrance, which opens into a small vestibule, handsomely finished.  From this the visitor passes into the main hall, which is elegantly finished.  It is paved with different-colored marble and dadoed with hard wood. It has a handsome fireplace and is lighted by a large skylight in the ceiling.  There are two doors leading out of the upper end of this hall, one into that part of the house occupied by the family, and the other into the reception-room, where the doctor’s patients wait their turn.  This room is 14×19, has an alcove at the back and a fireplace, is finished in hard wood, and is a pleasant apartment.  A door opens from this into the doctor’s office, which, as previously intimated, occupies the front of the house.  The office is prettily finished, and has a door opening directly into the vestibule, so that patients may leave without going back through the reception room or hall.  The portion of the house which has been described is separate from the remainder, and is only connected with it by the door leading from the back of the hall before mentioned.  This hall is in reality cut in two by a partition.  Back of this partition, in the part of the house occupied by the family, are the stairs leading to the second floor. The house has an L two stories in hight (sic), with a bay window in the rear.  In the basement of this L is the kitchen, on the first floor the dining-room, and above this a chamber.  As for the upper portions of the house, there is nothing in particular interest to call for a description.”

Clarence Blake’s father, John Harrison Blake, lived with them from about 1885 until his death in July of 1899.  John Blake was a consulting chemist and civil engineer, and also served as president of the Metropolitan and Middlesex Street Railways. 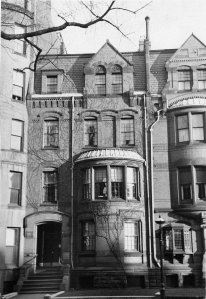 In about 1897, the Blakes were joined at 226 Marlborough by Dr. Eugene A. Crockett, a physician and ear, nose, and throat specialist.  He married in July of 1900 to Elizabeth LeBourgeois and they moved soon thereafter to 298 Marlborough.  He continued to maintain his medical office at 226 Marlborough until about 1906.

Frances Blake died in November of 1902 in Palo Alto, California, while returning home from a concert at Stanford University. She was living there with her two children, Elizabeth Hughes Blake and Thomas Barnard Blake, both students at Stanford.

Clarence Blake continued to live and maintain his medical offices at 226 Marlborough. In September of 1907, he married again, to Mary A. Houghton.  By 1909, they had been joined at 226 Marlborough by her sister, Hannah Lois Houghton.

By the 1911-1912 winter season, the Blakes also had been joined at 226 Marlborough by Arthur William Doubleday, a widower, and his brother, Clark O. Doubleday, both dentists, who also maintained their offices there.  They previously had lived and maintained their offices at 313 Marlborough.  Arthur Doubleday married again in August of 1913 to Florence Louise Fuller.  After their marriage, they moved to Wellesley, and Clark Doubleday moved with them.  By 1914, Arthur and Clark Doubleday had moved their dental offices to 220 Marlborough.

The Blakes and Miss Houghton continued to live at 226 Marlborough until his death in January of 1919.

On September 19, 1919, 226 Marlborough was purchased from Clarence Blake’s estate by Dr. Francis Cooley Hall and his wife, Priscilla Foster (Perry) Hall. He was a physician, specializing in arthritis and related diseases. They previously had lived at 10 Marlborough with her parents, Arthur Perry and Emma Amelia (Foster) Perry.

They continued to live at 226 Marlborough in during the 1922-1923 winter season, but moved thereafter to 349 Marlborough.

On June 1, 1923, 226 Marlborough was purchased from Francis C. Hall by Dr. Benjamin Harrison Ragle. He and his wife, Marguerite (Williams) Ragle, made it their home. They previously had lived at 112 Marlborough. They also maintained a home, Brook Trail Farm, in Topsfield.

B. Harrison Ragle was a physician.  He was personal physician to Admiral Richard Evelyn Byrd, Jr., and was a consultant on medical matters to Byrd’s 1939-1941 exploration of the Antarctic.  Ragle Glacier in Antarctica is named in his honor.

From the time they purchased it, Dr. Ragle maintained his medical office at 226 Marlborough and leased office space to an increasing number of other physicians.  In 1925, two other physicians —  Dr. John H. Taylor and Dr. F. Dennette Adams — had their offices there.  By 1940, Dr. Ragle had been joined by four other doctors.  And by 1950, five other doctors leased space from him (F. Dennette Adams remained there for the entire period).  The Building Department files include no record of Dr. Ragle ever securing approval for these medical offices.

On March 2, 1938, Benjamin Ragle transferred the property into his wife’s name.

Benjamin and Marguerite Ragle continued to live at 226 Marlborough until the mid-1950s, when they moved to an apartment at 222 Marlborough. He died there in May of 1956.

On June 10, 1957, 226 Marlborough was purchased from Marguerite Ragle by Lois A. (Billings) Leadbetter, the wife of Dr. Wyland F. Leadbetter. They lived at 166 Marlborough. He was clinical professor of surgery at Harvard Medical School and chief of urology at Massachusetts General Hospital.

226 Marlborough appears to have been exclusively medical offices.

On January 24, 1969, it was acquired from Lois Leadbetter by Demetre J. Decaneas. In April of 1969, he applied for (and subsequently received) permission to convert the property from a single-family dwelling with six doctor’s offices into twelve apartments.  In reviewing his application, the Building Department noted that there was no record of the property’s legal occupancy as anything other than a single-family dwelling.

On December 29, 1978, 226 Marlborough was purchased from Demetre Decaneas by John V. O’Neil, trustee of the 226 Marlborough Street Realty Trust. In June of 1979, he applied for (and subsequently received) permission to convert the property from twelve apartments into nine apartments.  In January of 1980, he amended his application to reduce the number of apartments to five.