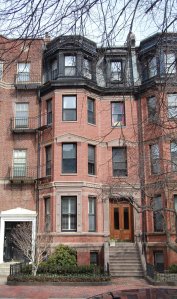 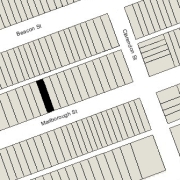 On April 2, 1877, Charles Freeland purchased a 168 foot wide lot from the estate of Gardiner Howland Shaw, who had purchased the land from the Commonwealth of Massachusetts on June 12, 1866. Charles Freeland probably had originally planned to subdivide it into seven equal lots of 24 feet each. However, after building the first four houses at 121-127 Marlborough on 24 foot lots and beginning construction on 129 Marlborough at the same width, he purchased an additional 12 foot wide lot to the west on November 28, 1879, from Henry Lee, Jr. (part of a lot Henry Lee had purchased from the Commonwealth on November 18, 1879), and built 131-133 Marlborough on 30 foot wide lots.

Click here for an index to the deeds for 123 Marlborough, and click here for further information about the land between the north side of Marlborough and Alley 419, from Clarendon to Dartmouth.

On September 3, 1878, 123 Marlborough was purchased from Charles Freeland by a trust established under the will of Samuel Johnson for the benefit of his son, dry-goods merchant Edward Crosby Johnson. He and his wife, Alice Trevett (Robbins) Johnson, made it their home. They previously had lived at 118 Marlborough. They also maintained a home in Nahant. 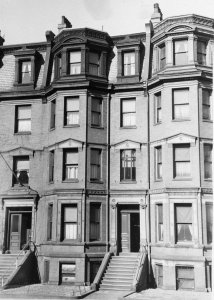 Charlotte Johnson married in June of 1892 to Curtis Guild, Jr.; after their marriage, they lived at 124 Marlborough.  Curtis Guild, Jr., was a partner in his father’s newspaper firm (publishers of the Commercial Bulletin) and later would become Governor of Massachusetts and US Ambassador to Russia.

Alice Johnson married in May of 1895 to John Lavalle, an architect.  He previously had lived at 183 Beacon with his step-father and mother, George Brune Shattuck and Amalia (Schutte) Lavalle Shattuck.  They continued to lived with Edward Johnson until about 1904, when they moved to 353 Marlborough.

Mary Johnson married in January of 1907 to Count Vittorio Orlandini-Guidi (called Orlandini), a lawyer.  After their marriage, they lived at 123 Marlborough with Edward Johnson.

Edward Johnson died in March of 1927. In his will, he left 123 Marlborough to his daughter, Mary Orlandini.

Vittorio and Mary Orlandini continued to live at 123 Marlborough. Their adult son, Edward Orlandini, a real estate agent, lived with them.

On February 27, 1941, 123 Marlborough was acquired from Mary Orlandini by the Boston Children’s Friend Society. Earlier that month, prior to conveying the property, Mary Orlandini had applied for (and subsequently received) permission to convert the property from a single-family dwelling into offices for the organization.

The Boston Children’s Friend Society continued to own and occupy 123 Marlborough until 1957.

On May 27, 1957,, 123 Marlborough was acquired from the Boston Children’s Friend Society by Fred L. Arata, a retail liquor dealer and real estate investor. He and his wife, Annette Flossie (Crovo) Boggiano Arata, lived in Brighton.

On February 26, 1959, 123 Marlborough was purchased from Fred and Annette Arata by real estate dealers Stuart H. Hasting and Joseph A. Gautreau. In March of 1959, they applied for (and subsequently received) permission to convert the property from offices into ten apartments.

On June 20, 1980, 123 Marlborough was purchased from the H. Motley Real Estate Trust by Richard B. Cohen and Charles S. Rosenblum, trustees of the 123 Marlborough Street Trust.

On December 5, 1980, they converted the property into ten condominium units, the 123 Marlborough Condominium. 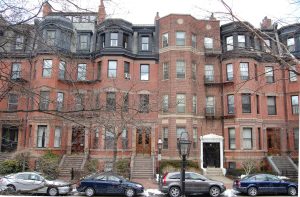