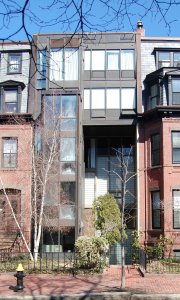 353 Marlborough was designed by Krokyn and Krokyn, architects, and built in 1958-1959 on a vacant lot where the original townhouse, built ca. 1871, had been demolished after being severely damaged by fire on May 7, 1935. The new house was built as a two-family dwelling using the foundation of original townhouse.

The lot at 353 Marlborough was acquired on May 8, 1958, by William Krokyn. He and his father, Jacob Frederick Krokyn were partners in Krokyn and Krokyn, and the original building permit application for the new house, dated May 16, 1958, was filed in the name of K. L. K. Realty at 154 Boylston, the same address as Krokyn and Krokyn.

Click here for an index to the deeds for 353 Marlborough, and click here for further information about the land between the north side of Marlborough and Alley 415, from Gloucester to Hereford.

On February 25, 1959, 353 Marlborough was acquired from William Krokyn by Doris T. Locke and Lucille May, trustees of the Ludor Realty Trust.

On August 31, 1960, 353 Marlborough was purchased from Doris Locke and Lucille Kay by Wilton Maddicks Hoag, a purchasing agent with New York Life Insurance. He and his wife, Alice Marie (Calhoun) Hoag, lived in one of the apartments. They previously had lived in Nahant.

On November 30, 1960, he transferred the property into his and his wife’s names.

On June 30, 1965, 353 Marlborough was acquired from the Hoags by advertising executive John Garry Kasten and his wife, Mary (Boreyko) Kasten. They lived at 259 Marlborough and he maintained his advertising agency, J. G. Kasten & Company, at 14 Newbury.

After acquiring 353 Marlborough, he moved his advertising agency to the house. He and his wife continued to live at 259 Marlborough until about 1969, when they moved to 353 Marlborough.

On May 14, 1971, 353 Marlborough was purchased from the Kastens by Dr. Donald E. Butterfield, a physician, who lived in one of the apartments. He previously had lived in Cambridge.

In April of 1985, he filed for (and subsequently received) permission to convert the property from two to four units by constructing a front bay and penthouse addition to the building, bringing the height to 55 feet, with seven-stories.  The addition was designed by John A. Harrell.

On July 13, 1987, he converted the property into four condominium units, The 353 Marlborough Street Condominium.

On July 16, 1873, 353 Marlborough was purchased from Hiram Gerrish by leather and shoe merchant Henry Lefrelet Daggett. He and his wife, Sara Eliza (Williams) Daggett, lived at 45 West Newton and then at 116 Commonwealth.

Henry Daggett probably purchased 353 Marlborough in anticipation of the marriage of his son, Henry, Jr., to Evelyn Willard Fay. They married in October of 1873 and made 353 Marlborough their home. Henry L. Daggett, Jr., also was a leather and shoe merchant.

Henry L. Daggett, Sr., died in March of 1882.  In his will, he left the residue of his estate, including 353 Marlborough, in trust for the benefit of his wife and his daughters, Sara Whittemore Daggett and Eleanor Williams Daggett, while they remained unmarried, with the stipulation that after his wife’s death, the trust was to terminate and be distributed in equal shares to his children then living and to the issue of any deceased child.

Following his father’s death, Henry and Evelyn Daggett moved to 116 Commonwealth to live with his mother and sisters.  The trust established under his father’s will continued to own 353 Marlborough and lease it to others.

By the 1882-1883 winter season, 353 Marlborough was the home of Elijah Brigham Phillips, president of the Fitchburg Railroad, and his wife, Maria Rebecca (Ayling) Phillips.  They previously had lived at 44 Newbury.  In February of 1885, their daughter, Anna M. Phillips, married Cyrus A. Page, and by the 1885-1886  season, the Phillipses and the Pages had moved to 398 Beacon.

By the 1885-1886 winter season, 353 Marlborough was the home of cotton broker John Chester Inches and his wife, Henrietta Clementine (Bright) Inches.  They had married in December of 1884 and probably had lived briefly at 40 Beacon with his parents, Martin Brimmer Inches and Mary Wells (Chester) Inches, before moving to 353 Marlborough.

J. Chester and Henrietta Inches continued to live at 353 Marlborough during the 1893-1894 season, and also maintained a home in Nahant. They had moved from 353 Marlborough by the next season and were living at The Empire at 333 Commonwealth by the 1896-1897 season.

By the 1895-1896 winter season, 353 Marlborough was the home of Ellen (Davis) Williams Hutchings, the widow of George Henry Williams and of William Vincent Hutchings.  Her daughter, Ellen Augusta Williams, lived with her.  They previously had lived at the Hotel Vendome and, before that, at 342 Commonwealth.

Ellen Williams married in June of 1896 to Charles Brooks Morrill, a dry goods merchant.  After their marriage, they lived at 353 Marlborough with her mother.  He previously had lived at 107 Blue Hill Avenue.

Ellen Hutchings and the Morrills continued to live at 353 Marlborough during the 1900-1901 winter season, but moved thereafter to 183 Bay State Road.

353 Marlborough had continued to be owned by the trust established under Henry L. Daggett’s will until the death of his widow, Sara (Williams) Daggett, in March of 1900. The trust assets (including 353 Marlborough) subsequently were distributed to their daughters, Sara Whittemore Daggett and Eleanor Williams Daggett, and their grandson, Henry Lefrelet Daggett, III (Henry, Jr., having died in December of 1894 in Paris).

On April 30, 1903, 353 Marlborough was acquired from the Daggett family by dry goods merchant Edward Crosby Johnson. He was a widower and lived at 123 Marlborough.

By the 1903-1904 winter season, 353 Marlborough had become the home of Edward Johnson’s son-in-law and daughter, John W. Lavalle and Alice Cornelia (Johnson) Lavalle, who previously had lived at 123 Marlborough with him. John Lavalle was an architect.

John and Alice Lavalle divorced ca. 1908. Alice Lavalle continued to live at 353 Marlborough and on August 28, 1918, her father transferred the property to her. She also maintained a home in Nahant.

In about 1934, she was joined at 353 Marlborough by her son and daughter-in-law, John and Virginia (Wilson) Lavalle.  They had married in September of 1932 and previously had lived in Cambridge.  His four children from his first marriage, to Ellen Tufts (who had died in January of 1932), lived with them: Alice Lavalle, Mary Dean Lavalle, John Edward Lavalle, and Ellen (Elaine) Lavalle.   John Lavalle was a portrait and landscape artist.

On May 7, 1935, 353 Marlborough was destroyed by fire.  Alice Lavalle, her grand-daughter, Alice, and two servants were killed, and Mary Lavalle died of injuries soon thereafter.  John Lavalle was in New York, where he was exhibiting his art, and Virginia Lavalle was in Cincinnati visiting family.

John and Virginia Lavalle subsequently moved to Cambridge and then to 3 Gloucester.

On December 26, 1939, the vacant lot at 353 Marlborough was acquired from John Lavalle by Woodward School, located at 319 Marlborough. It remained vacant and on April 6, 1956, as part of Woodward School’s dissolution, was transferred to the Boston Nursery for Blind Babies.

On May 24, 1956, the vacant lot was acquired from the Boston Nursery for Blind Babies by Robert Poole Loring of Swampscott. On May 8, 1958, he sold the lot to architect William Krokyn, who constructed a new two-family house on the foundations of the original townhouse.