16 Hereford is located on the east side of Hereford, between Beacon and Marlborough, with 14 Hereford  to the north and 18 Hereford to the south.

Click here for an index to the deeds for 16 Hereford, and click here for further information about the land between the north side of Marlborough and Alley 415, from Gloucester to Hereford.

On October 7, 1871, 16 Hereford was purchased from Frances Gibson by Emma B. (Streeter) Davis, the wife of Frederick S. Davis. They previously had lived at the Coolidge House hotel.

On May 25, 1883, 16 Hereford was purchased from Emma Davis by sisters, Miss Eunice Whitney and Miss Mary Whitney.  In 1880, they had lived with their brother, banker George Whitney, at 75 Marlborough.

Eunice Whitney died in June of 1888, and Mary Whitney moved soon thereafter. She continued to own 16 Hereford and lease it to others.

During the 1888-1889 winter season, 16 Hereford was the home of John William Mackintosh and his wife, Minnie Helen (Diggles) Mackintosh.  They previously had lived at the Hotel Vendome.  He was a banker and broker.  By the next season, they had moved to Brookline.

During the 1889-1890 winter season, 16 Hereford was the home of Selina M. (Gibson) Bixby, widow of Henry C. Bixby.  He had been paymaster of the Atchison, Topeka, and Santa Fe Railroad and had died in February of 1887 in San Diego.  By the next season, she was living at 591 Beacon. 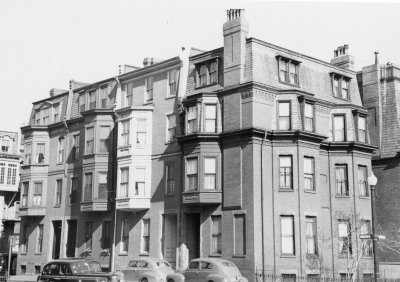 During the 1890-1891 winter season, 16 Hereford was the home of wholesale dry goods merchant George Richards Minot, Jr., and his wife, Agnes (Olney) Minot.  They had married in October of 1890 and 16 Hereford was their first home together.  Prior to their marriage, he had lived at 245 Marlborough and she had lived at 241 Marlborough. By 1892, they had moved to Milton.

On October 16, 1893, 16 Hereford was acquired from Mary Whitney by Gertrude (Huidekoper) Wells, the wife of Dr. Frank Wells. He was a physician and medical director for John Hancock Life Insurance. They previously had lived in the Longwood district of Brookline.

George Wells was an executive with a book bindery and also an author. Edgar Wells was associated with Harvard in various positions, including as an instructor of English, acting dean, and general secretary of the Harvard Alumni Association

Gertrude and Elizabeth Wells lived primarily in Torquay. Edgar Wells worked at the American Women’s War Hospital in Paignton in Devonshire and then with the Rockefeller Foundation.

Elizabeth Wells married in June of 1915, in Torquay, to Jordan Herbert Stabler, second secretary at the American embassy in London. A career diplomat, he also was an author and, after leaving the diplomatic service, was European representative for Gulf Oil.

Gertrude Wells and Edgar Wells returned to Boston in July of 1915. Edgar Wells subsequently went to Washington DC as director of chapters of the American Red Cross, then returned to London with the Red Cross. He enlisted in the US Army and served as a military attaché in the US Embassy in London.

Gertrude Wells died in April of 1928. After his mother’s death, George Wells moved to 925 Boylston.

On August 22, 1930, real estate dealer Edward J. Ball, presumably acting on behalf of the Wells family in conjunction with the property’s sale, applied for (and subsequently received) permission to convert the property from a single-family dwelling into four apartments.

On August 26, 1930, 16 Hereford was acquired from George Wells, Edwin Wells, and Elizabeth (Wells) Stabler by George Peirce and his wife, Marian W. (Greene) Peirce. The deed was not recorded until March 20, 1931.

On December 7, 1932, they transferred the property into Marian Peirce’s name.

The Peirces lived in one of the apartments at 16 Hereford in 1932.  They previously had lived in Medfield, and by 1933 had moved to Bristol Ferry, Rhode Island, where they operated a tavern.

On July 19, 1939, the Suffolk Savings Bank for Seamen and Others foreclosed on its mortgage and took possession of the property.

On July 19, 1939, 16 Hereford was acquired from the Suffolk Savings Bank by real estate dealer Henry Joseph O’Meara, and on the same day he conveyed it to Norma Calvin Vietrie and her sister, Juanita Montgomery Vietrie. Both were art teachers, Norma Vietrie formerly in Lewiston, Maine, and Juanita Vietrie formerly in Keene, New Hampshire.

They both married in 1942, Norma Vietrie to Frank Foster Hines, a mechanical engineer, and and Juanita Vietrie to John O. Silvey, an electrical engineer. Both couples lived at 16 Hereford until about 1952.

On November 13, 1953, 16 Hereford was purchased from Norma Hines and Juanita Silvey by Irving J. Rosenfield, He was a widower – his wife, Rebecca (Kaplan) Rosenfield, having died in May of 1950 – and lived in Beverly.

On March 8, 1954, he transferred the property to himself as trustee for the benefit of his children, Gerald Alvin Rosenfield and Shaila A. Rosenfield.

On November 26, 1954, 16 Hereford was acquired from Irving Rosenfield by Arthur J. Bryant of Lynn. In June of 1964, he filed for permission to legalize the occupancy as five (rather than four) apartments, indicating that was the number of units in the building when he purchased it. He subsequently abandoned the application.

The property changed hands and on April 1, 1965, was acquired by Pierre L. de Bourgknecht. In February of 1966, he filed for (and subsequently received) permission to legalize the property as a five-unit apartment house.

On June 27, 1995, Solomon Boucai, as trustee of the Sixteen Hereford Street Trust, transferred the property to himself and Lewis A. Sassoon.

16 Hereford continued to be assessed as a four-to-six family dwelling in 2021.