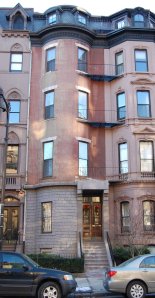 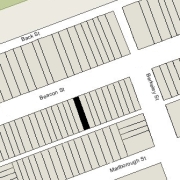 167 Beacon is located on the south side of Beacon, between Berkeley and Clarendon, with 165 Beacon to the east and 169 Beacon to the west.

When it was built, 167 Beacon had a brownstone façade.  Sometime after the early 1940s (when this original façade is still shown in photographs), the front was resurfaced at the basement and first floor levels, with brick above.  The lintels above the windows and other original details also were removed.

The original parcel where 161-167 Beacon were built had a 78 foot frontage. It had been purchased from the Commonwealth of Massachusetts on September 10, 1859, by George Goss and Norman Carmine Munson, the contractors responsible for filling the Commonwealth’s Back Bay lands. On the same day, they had sold it to banker Franklin Haven (one of the three Commissioners on the Back Bay responsible for the sale of the Commonwealth’s land), who then sold it on December 17, 1859, to Samuel Hooper.

Click here for an index to the deeds for 167 Beacon, and click here for further information about the land between the south side of Beacon and Alley 420, from Berkeley to Clarendon.

Henry Whitwell subdivided the parcel into four lots with a combined frontage of 76 feet six inches. He sold the lot at 167 Beacon to Arthur Lithgow Devens on February 8, 1865, and then sold him the additional strip of land one foot 6 inches wide at the west on November 17, 1865 (that same day, Arthur Devens sold the strip of land to Paul Wallis who combined it with the land where 169 Beacon was built).

Alfred Devens was a lawyer and businessman, a partner in J. W. Paige & Company, dealers in domestic goods, and (from 1862) treasurer of the Appleton and Hamilton Manufacturing Companies in Lowell. He and his wife, Agnes Russell (Elwood) Devens, lived at 3 Chestnut.

Henry Whitwell built his own home at 161 Beacon in 1863-1864, where he lived with his parents, Samuel Whitwell and Sophia (Story) Whitwell, and his unmarried sister and brother, Sophia Louisa Whitwell and Samuel Horatio Whitwell (who also was his business partner).

Henry Whitwell’s mother had died in December of 1867 and his father died in March of 1871. Soon after their father’s death, Henry, Sophia, and S. Horatio Whitwell moved from 161 Beacon to the new house at 167 Beacon. They continued to live at 167 Beacon until about 1875, when they moved to 111 Commonwealth.

On March 16, 1875, 167 Beacon was purchased from Henry Whitwell by Francis Henry Appleton. He and his wife, Fanny Rollins (Tappan) Appleton, made it their home. They had married in June of 1874. Prior to their marriage, he had lived at 26 Commonwealth with his step-father and mother, Henry and Georgiana (Silsbee) Saltonstall. 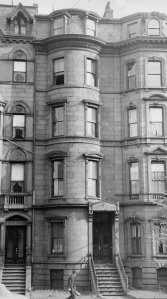 Francis Henry Appleton served in the First Corps of Cadets from 1870, rising to the rank of Captain in 1879.  In 1897, he was named Commissioner General of Massachusetts, retiring in 1900 with the rank of Major General.  He also maintained a farm in Peabody where he bred Ayrshire cattle.

The Appletons continued to live at 167 Beacon during the 1879-1880 winter season, but moved soon thereafter to 155 Beacon to live with Fanny Appleton’s mother, Elizabeth (Rollins) Tappan, the widow of Sewall Tappan, while the new home they were building at 265 Commonwealth was being completed.

On September 29, 1880, 167 Beacon was purchased from Francis Appleton by attorney Charles Alfred Welch. He and his wife, Mary Love (Boott) Welch, made it their home. They previously had lived in Waltham. The Welches continued to live at 167 Beacon during the 1895-1896 winter season, but moved soon thereafter to Cohasset.

On May 1, 1896, 167 Beacon was purchased from Charles Welch by Dr. William Allen Brooks, Jr., and on the same day, he transferred into the name of his wife, Helen (Winchell) Brooks. They previously had lived in an apartment at 259 Beacon. They also maintained a home in Lincoln.

Dr. Brooks was a physician and surgeon, and also maintained his office at 167 Beacon.  During the influenza epidemic in the Fall of 1918, he established the Corey Hill Cubicle Hospital, an open-air hospital on Corey Hill.

Helen Brooks died in 1919 and he moved to Lincoln soon thereafter. He died in May of 1921.

By 1922, 167 Beacon was the home of retired real estate broker John O’Brien, who leased the house from William Brooks’s estate. He previously had lived in Sharon, where he had donated the building and land for the College of the Sacred Heart Brotherhood in memory of his wife, Mary (Donovan) O’Brien.  He also was one of the original organizers of the St. Vincent de Paul Society.

Living with him were his daughters, Gertrude G. O’Brien, a teacher, and his son-in-law and daughter, Dennis J. Mahoney and Mary A. (O’Brien) Mahoney, and the Mahoney’s children. He also accepted lodgers.

From about 1923 through 1927, the lodgers at 167 Beacon included Miss Susan Hall Nugent, a teacher, and her sister, Miss Margaret Ann Nugent, a secretary with the National Civic Federation.

John O’Brien died in January of 1925. Gertrude O’Brien and the Mahoneys continued to live at 167 Beacon and to operate it as a lodging house.

On May 18, 1954, 167 Beacon was acquired from Sanford Fisher by the Kelly Realty Corporation. That same month, it applied for (and subsequently received) permission to convert the house from a single-family dwelling into twelve apartments.

On September 30, 1968, the Kirby Realty Corporation transferred 167 Beacon to Mary E. Kirby, its president and treasurer.