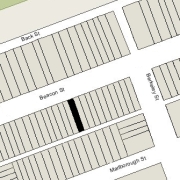 169 Beacon is located on the south side of Beacon, between Berkeley and Clarendon, with 167 Beacon to the east and 171 Beacon to the west.

169 Beacon was designed by architect Luther Briggs, Jr., and built in 1866 by builder and real estate dealer Paul Dean Wallis, one of three contiguous houses (169-171-173 Beacon) he built for speculative sale. He and his wife, Mary Caroline (Pierce) Wallis, lived in West Roxbury.

169 and 171 Beacon form a symmetrical pair, with the entrances centered between two bays extending through the mansard roof. 173 Beacon is of the same design with the entrance on the west side. 173 Beacon appears to have been built in anticipation of there being a companion building at 175 Beacon, forming another symmetrical pair. However, it was designed by a different architect and, although subsequent remodeling of 175 Beacon has obscured its original design, it does not appear that it was originally a “sister” house to 173 Beacon.

Paul Wallis assembled several parcels of land to create the three 19 foot wide lots for 167-171-173 Beacon. He bought the bulk of the land – a lot with a 50 foot frontage — on May 23, 1866, from Robert Scott. He combined it with two smaller lots he had already acquired on November 17, 1865, a 5 foot 6 inch lot on the west of Robert Scott’s lot which he purchased from real estate dealer Henry Whitwell, and a 1 foot 6 inch strip on the east of Robert Scott’s lot which he purchased from Arthur Lithgow Devens (who had acquired it from Henry Whitwell on the same day). The 1 foot 6 inch strip to the east was part of a parcel originally purchased from the Commonwealth of Massachusetts on September 10, 1859, by George Goss and Norman Carmine Munson, the contractors responsible for filling the Commonwealth’s Back Bay lands. The rest of the land was part of a parcel purchased from the Commonwealth on February 4, 1860, by Norman Munson.

Click here for an index to the deeds for 169 Beacon, and click here for further information about the land between the south side of Beacon and Alley 420, from Berkeley to Clarendon.

On November 28, 1865, Paul Wallis filed a Notice of Intention with the Board of Aldermen to build 169-173 Beacon. On March 12, 1866, the Boston Evening Transcript reported that “three first-class freestone houses are to be erected on the south side of Beacon street, just below the Public Garden, designed by L. Briggs of 20 Joy’s Building, and owned by Mr. P. D. Wallis.  They are to be four stories in height, and the fronts elaborately wrought. The foundations are already laid, and they will probably be completed in early summer, when they will be on the market.”

Completion of the houses may have been delayed by a law suit filed by Andrew Mudge, who owned the property at 175 Beacon. He secured a preliminary injunction to prevent Paul Wallis’s construction of the houses at 169-173 Beacon on the basis that they would violate the restrictions in the land deeds from the Commonwealth of Massachusetts requiring that the houses be set back twenty feet from the street (with exceptions for bays and entrance stairs and porticos). In June of 1866, the Supreme Judicial Court dissolved the preliminary injunction, presumably finding that the design would not violate the setback requirement.

On April 29, 1867, Paul Wallis offered all three houses for sale at public auction.  The auction notice published in the Boston Traveller by auctioneers N. A. Thompson & Co. noted that the houses were “just completed” and that “each contain two spacious drawing rooms, large entrance hall, dining room, reception parlor, billiard room and seven chambers, with spacious and pleasant kitchen and laundry accommodations. … Each house has two expensively finished bath rooms for family use, and one for the use of the servants, with large cedar closets, several spacious wardrobe and linen closets, and a water closet in each story, two separate stair cases, inside shutters and blinds, and large plate glass windows back and front.”

The auction notice also indicated that “one of these houses, at least, will be sold to the highest bidder without reserve, and the other two also, should a sufficient competition warrant their being put up.”  Only 173 Beacon was purchased at the auction.

On July 1, 1869, 169 Beacon was purchased from Paul Wallis by David Whiton.  He and his wife, Ellen (Kelleran) Whiton, made 169 Beacon their home.  They previously had lived at the Tremont House hotel.  He was a ship chandler and ropemaker.

On January 20, 1873, he transferred the property into his wife’s name.

On September 18, 1876, 169 Beacon was sold at public auction. In its September 16, 1876, advertisement for the sale in the Boston Daily Advertiser, auctioneer Samuel Hatch & Co. noted that the “two first stories are finished in hard wood,” on the main entrance floor were a reception room, dining room, and “spacious halls,” and on the second floor were “elegant drawing rooms, beautifully finished in fresco, and painted walls and heavy cornice.” The advertisement also indicated that the “very elegant furniture, rich draperies, and costly mirrors and chandeliers can be had by the purchaser at an appraisal, or will be sold by public auction in a few days following.”

The successful bidder at the auction was Dr. Alexander Brown Wilbor, who took title from Ellen Whiton that same day. He and his wife, Ida F. (Littlefield) Wilbor, made it their home.  They previously had lived at the St. James Hotel.  He was a manufacturing chemist.

On June 24, 1892, Alexander Wilbor transferred the property into his wife’s name.

In the early 1890s, they purchased a second home and farm in Sorrento, Maine.

They continued to live at 169 Beacon during the 1893-1894 winter season, but moved thereafter to Brookline, where they were living at the time of his death in April of 1896. Ida Wilbor continued to own 169 Beacon and lease it to others.

On October 21, 1894, the Table Gossip column in the Boston Globe reported that 169 Beacon had been leased by banker and note broker Eben Howard Gay, who would make it his home in early December, and that his parents, attorney Ebenezer Gay and Ellen Blake (Blood) Gay, and his brother, note broker William Otis Gay, would live with him.  They all previously had lived at 20 Trull and then temporarily at the Hotel Bellevue (21-23 Beacon) while improvements at 169 Beacon were being completed.

The Gay family also maintained a home on Beach Island in Cohasset.

Eben Howard Gay married in December of 1898 to Cornelia Spalding Fanning.  After their marriage, they lived at 169 Beacon, and his parents and brother moved to 187 Beacon.

During the 1902-1903 winter season, 169 Beacon was the home of Henry Salisbury Millard and his wife, Harriet (Stevens) Millard, who operated it as a lodging house.  They previously had lived at 125 Beacon, where they also had operated a lodging house.  He was a real estate agent and formerly had been a boot and shoe manufacturer in North Adams, Massachusetts.

By the 1903-1904 winter season, 169 Beacon was lodging house and medical offices. Among the residents were Dr. Samuel Robinson and Dr. Edwin A. Locke, both physicians, who lived and maintained their offices in the house.

Dr. Robinson married in April of 1905 to Ellen Derby Bellows of 29 Hereford, and they moved to an apartment at The Marlborough at 416 Marlborough.  At about the same time, Dr. Locke moved his home and office to 117 Beacon.

By 1907, it was the home of Charles Henry Bingham and his wife, Elizabeth (Mead) Bingham.  Charles Bingham was a railroad conductor, and they operated 169 Beacon as a lodging house.  They continued to live there in 1908, but by September of 1908 (when their only son, Charles, died) they had moved to 142 Beacon.

169 Beacon remained a lodging house with multiple residents until about 1910.

In 1910, Sturgis Coffin, II, and Arthur H. Taber, real estate and mortgage dealers, brought suit against Ida Wilbor and secured a writ of attachment to recover $175 which she owed them. The property was sold at a sheriff’s auction on September 17, 1910, and purchased by Charles F. Cogswell. On October 7, 1910, his interest was purchased by Ida Wilbor’s son, Rufus Littlefield Wilbor.

On November 14, 1910, Albert E. Gladwin foreclosed on his mortgage to Ida Wilbor and sold 169 Beacon to Susan Carberry (Lay) Wharton, the wife of William Fisher Wharton. On the same day, she also purchased Rufus Wilbor’s interest in the property.

William Wharton was an attorney. He had served as First Assistant Secretary of State during the Benjamin Harrison administration. 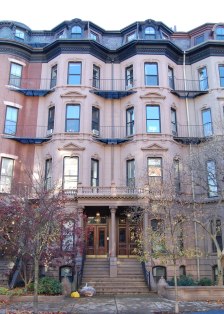 William and Susan Wharton made 169 Beacon their Boston home. They also maintained a home, The Elms, in Groton, which had been their primary residence in 1909 and 1910; in 1908, they had maintained a Boston residence at 168 Beacon.

William Wharton died in May of 1919. Susan Wharton continued to live at 169 Beacon. Their son, Philip Wharton, lived with her. By the 1920-1921 winter season, she also had been joined by her son-in-law and daughter, Henry St. John Smith and Constance (Wharton) Smith. They previously had lived in an apartment at 199 Marlborough.  Henry St. John Smith was vice president of the Atlantic Radio Company, wholesale distributors of RCA radios.

Susan Wharton spent the 1921-1922 winter season in Groton, and did not resume living at 169 Beacon. Philip Wharton and the Smiths lived at lived at 169 Beacon during that season, but moved thereafter, Philip Wharton to Groton and Henry and Constance Smith to 300 Beacon.

By the 1922-1923 winter season, 169 Beacon had been leased from Susan Wharton by Elizabeth (French) Clark, the widow of mining investor Edward Andrews Clark, who had died in 1922. Their three children — Edward, Geoffrey, and Helen Olivia Clark — lived with her. Prior to her husband’s death, they had lived in Jamaica Plain. They continued to live at 169 Beacon during the 1924-1925 season, but moved thereafter.

On May 10, 1926, 169 Beacon was purchased from Susan Wharton by Mrs. Isabel Fiske (Edwards) Sherwin and her daughter, Mrs. Eleanor (Sherwin) Goodwin. Isabel Sherwin was the widow of General Thomas Sherwin, former President and Chairman of the Board of the New England Telephone and Telegraph Company. Eleanor Goodwin was the widow of William Hobbs Goodwin, Jr., who had been a banker and note broker. Living with them were Eleanor Sherwin’s unmarried adult children, Edward Vassall Sherwin and Anne Isabel Sherwin, and Eleanor (Sherwin) Goodwin’s son, William Hobbs Goodwin, III, a stockbroker. They all had lived at 150 Commonwealth until September of 1926.

William Goodwin, III, married in September of 1928 to Ruth Kempton and they moved to Cambridge.  At about the same time, Isabel Sherwin’s son, Thomas Edwards Sherwin, joined her and his siblings at 169 Beacon.  He was a widower, his wife, Emily Louise (Blodgett) Sherwin, having died in 1923.

Edward Sherwin married in 1939 to Kathleen Crook, and they moved to Concord, where he was a printer.

Isabel Sherwin died in June of 1939.  Eleanor Goodwin, Thomas E. Sherwin, and Anne Sherwin continued to live at 169 Beacon until about 1946.

On March 3, 1947, 169 Beacon was purchased from Eleanor Goodwin and Isabel Sherwin’s estate by Michael (Max) Lilly, a partner in the Lilly Construction Company with his father, Harry Lilly, and brother, David Lilly. Michael Lilly and his wife, Goldie Gertrude (Karess) Lilly, lived at 215 Newbury.

169 Beacon was shown as vacant in the 1947 City Directory, and by 1948 had been converted into apartments.

The property changed hands and on November 27, 1956, was acquired by Beacon View Realty Incorporated. In August of 1958, it acquired 171 Beacon.

On May 30, 1980, Jane S. White, trustee, purchased 169-171 Beacon from the Broderick Development Corporation. On December 29, 1983, she converted the two buildings into twenty-four condominium units (twelve units in each building), the Beacon Associates Condominium.