The block on the south side of Beacon between Berkeley and Clarendon is 548 feet in length and 112 feet from Beacon to Alley 420.

The land was part of the approximately 108 acres of land in the Back Bay owned by the Commonwealth of Massachusetts.

The Commonwealth sold its land starting in 1857. The earliest transactions were by private sales negotiated by the Commissioners on the Back Bay. In 1860, the legislature required that all future sales be made through public auctions. The first auction was held on October 24, 1860, and they continued until March of 1872, when they were suspended due to depressed real estate values. In 1879, the legislature authorized the Harbor and Land Commissioners (successors to the Commissioners on the Back Bay) to sell lots with frontages of up to 100 feet by privately negotiated sale. The land sales resumed in May of 1879 and the last of the remaining land was sold in 1886.

Click here for more information on the Commonwealth of Massachusetts land in the Back Bay.

The land on the south side of Beacon between Berkeley and Clarendon acquired from the Commonwealth in 1858 and 1860 through several transactions by Norman Carmine Munson and George Goss.

Munson and Goss were the Commonwealth’s contractors for filling the land, and these were among several parcels they received as partial compensation under their contract. The details of their arrangements are not set forth in the deeds, but it appears that they were conveyed the land by the Commonwealth at an agreed-upon value and then resold it at a profit to buyers who already had been identified. The last of these transactions occurred in May of 1860, and a May 3, 1860, article in the Boston Daily Advertiser reported that the conveyances made at that time, together with those made previously, compensated the contractors for “the full sum of $305,000 embraced in the contract of 1858” for filling the land.

On September 2, 1858, the Commonwealth conveyed Norman Munson and George Goss the eastern 125 feet, running west from Berkeley, and on September 10, 1859, it conveyed them the parcel to the west, with a frontage of 78 feet. In both cases, they resold the land to individual buyers on the same day they acquired it from the Commonwealth. 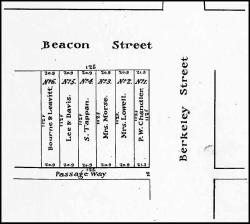 Peleg Whitman Chandler was an attorney and publisher of the Law Reporter, which he established in 1838. He and his wife, Martha Ann Bush (Cleaveland) Chandler, lived at 99 Mt. Vernon and later at 154 Beacon. Jonathan Amory Davis was president of the Suffolk National Bank. He and his wife, Frances Elizabeth (Amory) Amory lived in Dorchester. Henry Lee, Jr., was a founder and partner in the investment banking firm of Lee, Higginson & Co. and president of the Provident Institution for Savings. He and his wife, Elizabeth Perkins (Cabot) Lee, lived in Brookline.

On July 5, 1860, the partners subdivided the property into six lots. Peleg Chandler bought the corner lot at 149 Beacon, and Henry Lee and J. Amory Davis bought the lot at 157 Beacon; the other four lots were bought by individual buyers. Construction of 149-151-153-155-157-159 Beacon began soon thereafter.

Central Parcel. On September 10, 1859, Norman Munson and George Goss sold Franklin Haven the 78 foot wide parcel to the west of the parcel they previously had sold to Peleg Chandler and his partners. He was president of the Merchants Bank and one of the three Commissioners on the Back Bay (later Commissioners on Public Land) responsible for the sale of the Commonwealth’s lands. He and his wife, Sarah Ann (Curtis) Haven, lived at 97 Mt. Vernon.

Franklin Haven sold the lot on December 17, 1859, to shipping merchant and US Congressman Samuel Hooper, who then sold it on October 21, 1861, to real estate dealer Henry Whitwell.

Henry Whitwell subdivided the parcel into four lots with a combined frontage of 76 feet six inches. He built his own home at 161 Beacon and retained the lot at 163 Beacon. On February 8, 1865, he sold the lot at 167 Beacon to Arthur Lithgow Devens, and sold him the additional strip of land 1 foot 6 inches wide at the west on November 17, 1865 (that same day, Arthur Devens sold the strip of land to Paul Wallis who combined it with the land where 169 Beacon was built).

On May 9, 1868, Henry Whitwell sold the lot at 165 Beacon to Anna Harper (Converse) Flagler, the wife of John Haldane Flagler. She had 165 Beacon built and subsequently sold it to her father, James Cogswell Converse, who resold it on December 1, 1869, to dry goods merchant Southworth Shaw, Jr., who made it his home.

Central and Western Parcels. Norman Munson sold the remainder of the land on the block, with a frontage of 395 feet running to Clarendon, to Horace Binney Sargent, conveying the land within a week of receiving it from the Commonwealth.  Horace Sargent was an attorney. He served in the Civil War as a Colonel in the First Massachusetts Cavalry, and subsequently was brevetted a Brigadier General. He and his wife, Elizabeth Little (Swett) Sargent, lived in West Roxbury.

Horace Sargent probably was acting on behalf of others and soon after acquiring the land from Norman Munson, he began selling lots to different investors. By mid-1861 had disposed of all of the land.

The eastern 50 feet were acquired on March 1, 1860, by cotton broker Robert Scott. The lot remained vacant and on May 23, 1866, was purchased from him by builder and real estate dealer Paul D. Wallis. He combined it with two smaller lots he had already acquired on November 17, 1865, a 5 foot 6 inch lot to the west, which he purchased from Henry Whitwell, and a 1 foot 6 inch strip on the east which he purchased from Arthur Lithgow Devens (who had acquired it from Henry Whitwell on the same day). Paul Wallis subsequently built 169-171-173 Beacon on the 57 foot wide lot, for speculative sale.

Between March of 1860 and November of 1862, Henry Whitwell acquired two parcels comprising all of the land on the block west of Robert Scott’s land with the exception of a 21 foot lot at 185 Beacon and a 75 foot lot at the western end of the block.

On November 28, 1860, Horace Sargent sold the 25 foot lot to the west of Henry Whitwell’s land to William B. Rice.

On April 5, 1862, Henry Whitwell purchased the eastern four feet of William Rice’s land. He combined it with his 100 foot parcel and, on April 9, 1862, sold the western 21 feet to Nathaniel Silsbee, who built his home at 183 Beacon.  Henry Whitwell built a companion house at 181 Beacon for speculative sale.

After William B. Rice had sold Henry Whitwell the eastern four feet of his 25 foot lot in April of 1862, he retained the remaining 21 feet as a vacant lot. On April 27, 1864, he sold it to real estate dealer James T. Eldredge. It continued to be vacant and on October 14, 1868, James Eldredge sold it to James W. Tobey, a builder. On November 10, 1870, he sold the lot to John Francis Anderson, who built his home at 185 Beacon.

In June of 1861, Horace Sargent had sold a 50 foot parcel to the west of William Rice’s land to his father, attorney Lucius Manlius Sargent, and the 45 foot lot next to it to John Lowell. Henry Whitwell purchased both lots in November of 1862.

Western Parcels. On January 25, 1861, Horace Sargent sold the parcel at the western end of the block, with a 75 foot frontage on Beacon, to attorney Francis E. Parker.

On January 23, 1863, Francis Parker sold the corner lot at Clarendon, with a frontage of 25 feet on Beacon, to Thomas Handasyde Perkins, III, and his wife, Elizabeth Jones (Chadwick) Perkins, who built their home at 285 Clarendon.

In June of 1866, William Carpenter entered into an agreement with two other builders, John Fisher Farrington and James W. Tobey, under which they agreed to build houses on the western 40 feet of his land, at 197-199 Beacon, and he agreed to sell them the land at a specified price upon their completion.

William Carpenter’s remaining 60 feet to the east continued to be vacant and, on April 11, 1870, he resold the western 20 feet at 195 Beacon to Francis Parker.

Original Construction. All of the houses on the south side of Beacon between Berkeley and Clarendon had been built by 1872.

The plans below illustrate when the land on the block was first purchased from the Commonwealth (based on the dates of the deeds) and when houses were first constructed (based on dates provided in Bainbridge Bunting’s Houses of Boston’s Back Bay).

The deeds from the Commonwealth (Suffolk Co. Deed Registry Book 743, p. 231; Book 764, p. 27; Book 772, p. 109 and 183; Book 773, p. 305; and Book 778, p. 63) contained identical language specifying that any building on the land was to be “at least three stories high for the main part thereof and shall not in any event be used for a stable, or for any mechanical or manufacturing purposes;” that the front walls were to be set back twenty-two feet from Marlborough, with “steps, windows, porticos, and other usual projections appurtenant thereto” allowed in the reserved space; and that “no cellar or lower floor of any building shall be placed more than four feet below the level of the mill-dam, as fixed by the top surface of the hammered stone at the south-easterly corner of the emptying sluices.” The deeds also provided that the owners of the land would have the right to “plant and cultivate trees on the side walks” in front of their land provided that they left a distance of ten feet between the front boundary of their lots and the trees.

In November of 1858, the Commissioners on the Back Bay voted to clarify that the prohibition on stables would not be enforced “in such a manner as to prevent the erection and use of private stables by gentlemen as appurtenances to their own dwelling homes; provided, such stables are so constructed and used as not to be justly offensive to the occupants of the surrounding buildings.” This clarification was subsequently published in the auction catalogues issued by the Commissioners, but usually was not included in the deeds.

In January of 1863, the Commissioners on Public Lands (successors to the Commissioners on the Back Bay) adopted dimensional limitations on the projections allowed in the setback area. These applied to the deeds previously executed by the Commonwealth, including the land on the south side of Beacon between Berkeley and Arlington.

The Commonwealth of Massachusetts conveyed the land on the south side of Beacon between Berkeley and Clarendon by the following deeds: