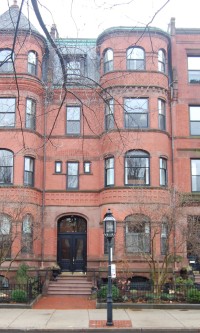 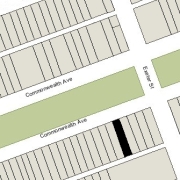 202 Commonwealth was designed by Allen and Kenway, architects, and built in 1882-1883 by Leander Greeley, carpenter, and James Smith, mason, one of two contiguous houses (200-202 Commonwealth) with unusual rectangular bays with curved sides topped with conical roofs (the conical roof at 202 Commonwealth has been removed). 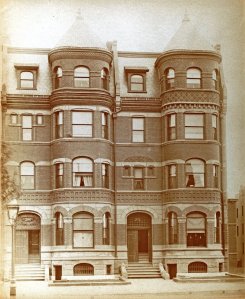 202 Commonwealth was built on a 26 foot lot originally sold by the Commonwealth of Massachusetts by a privately negotiated contract (not at public auction) on October 25, 1879. The contract probably was with Sarah French, but may have been with someone else from whom she acquired the right to purchase the land. She purchased and took title to the land from the Commonwealth on July 12, 1883, after the house was substantially completed.

Click here for an index to the deeds for 202 Commonwealth, and click here for further information about the land between the south side of Commonwealth and Alley 433, from Exeter to Fairfield.

On June 10, 1883, the “Table Gossip´column in the Boston Globe reported that Sarah Stratton would “move into her new house” in July. Her son, Charles Edwin Stratton, Jr., and her son-in-law and daughter, Nathaniel Wales and Susan (Stratton) Wales, lived with her. They all previously had lived at 1489 Washington. Charles Stratton, Jr., was a lawyer; Nathaniel Wales was agent for a rubber company. Charles and Sarah Stratton’s other son, Solomon Piper Stratton and his wife, Annie Flagg Wales (the sister of Nathaniel Wales), lived at 343 Marlborough.

Nathaniel and Susan Wales continued to live at 202 Commonwealth until about 1892, when they moved to Albany, New York. 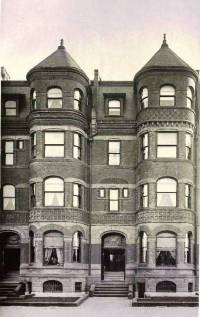 Sarah Stratton and her son, Charles, continued to live at 202 Commonwealth until her death in March of 1897.  By the 1897-1898 winter season, Charles Stratton had moved to an apartment at 293 Commonwealth.

On January 1, 1898, 202 Commonwealth was purchased from Sarah Stratton’s four children by Ella Frances (Sturtevant) Kellen, the wife of William Vail Kellen. They previously had lived at 40 Hereford. They also maintained a home in Marion.

William Kellen was an attorney and also served as treasurer of the B. F. Sturtevant Company, manufacturers of fans and air handling equipment, founded by his father-in-law, Benjamin Franklin Sturtevant. 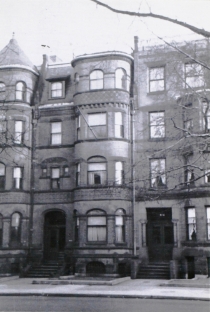 They continued to live at 202 Commonwealth during the 1908-1909 winter season, but moved thereafter to 342 Beacon.

On May 10,1909, 202 Commonwealth was purchased from Ella Kellen by Isabelle (Alexander) Robey, the wife of Dr. William Henry Robey, Jr., a cardiologist and internist, and an instructor at Harvard Medical School. He also maintained his medical office at the house. They previously had lived (and he had maintained his office) in Roxbury.

On July 1, 1954, 202 Commonwealth was acquired by Ina Matilda (Wiren) Syren, the wife of Victor Alarek Syren, a hairdresser. They previously had lived in Townsend, Massachusetts.  In July of 1954, Ina Syren filed for (and subsequently received) permission to convert the property from a single-family dwelling into a lodging house.  They continued to live there and operate it as a lodging house until about 1959.

The property changed hands and on September 3, 1964, was acquired by Back Bay Dormitories, Inc., a wholly-owned subsidiary of Newbury College, which converted it from a lodging house into a dormitory. 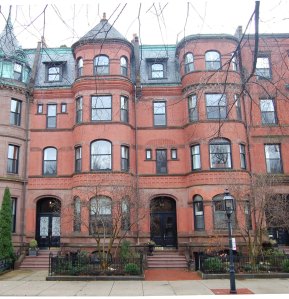 On January 16, 1998, it converted the combined property into 8 condominium units, the 202 Commonwealth Avenue Condominium. 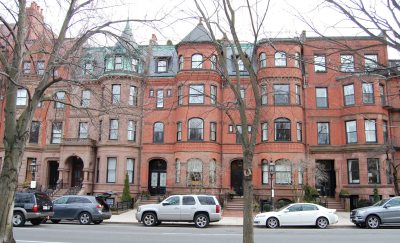