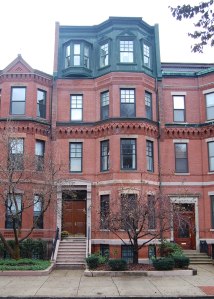 216-218 Commonwealth were built for East India merchant and stockbroker George Henry Mackay. He is shown as the owner on the original permit application for both houses. His father, Robert C. Mackay, built 220 Commonwealth at about the same time. George Mackay sold 216 Commonwealth and he and his wife, Maria (Starbuck) Mackay, made 218 Commonwealth their home.

George Mackay purchased the land for 216-218 Commonwealth on April 7, 1879, from the National Bank of Commerce of Boston. The original lot was 49.5 feet in width.  He subdivided the western 48 feet into the lots for 216 and 218 Commonwealth, and sold the eastern 1.5 feet (with the eastern half of the party wall at 216 Commonwealth) in September of 1879 to James Barr Ames. 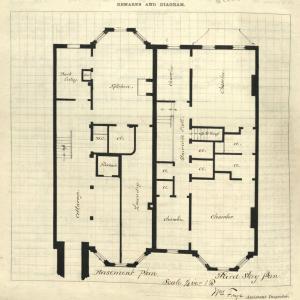 Click here for an index to the deeds for 216 Commonwealth, and click here for further information about the land between the south side of Commonwealth and Alley 433, from Exeter to Fairfield.

On January 29, 1880, 216 Commonwealth was purchased from George Mackay by Gertrude (Horsford) Fiske, the wife of Andrew Fiske, an attorney. They previously had lived at 267 Clarendon. They also maintained a home in Weston.

During the 1883-1884 winter season, the Fiskes were living elsewhere and 216 Commonwealth was the home of fertilizer manufacturer Robert Stow Bradley and his wife, Leslie (Newell) Bradley.  They previously had lived at 349 Marlborough.  By the 1884-1885 season, they had moved to a new home they had built at 255 Marlborough and the Fiskes were once again living at 216 Commonwealth.

Gertrude Fiske died in July of 1920. Andrew Fiske continued to live at 216 Commonwealth; their unmarried daughter, Gertrude, a noted impressionist and landscape painter, lived with him.

Andrew Fiske died in January of 1930. After his death, Gertrude Fiske made her home in Weston. 216 Commonwealth was inherited by the Fiskes’ four surviving children: Gertrude Fiske, Augustus Fiske, Gardiner Fiske, and Cornelia (Fiske) Willis. On June 27, 1931, Augustus Fiske transferred his interest to his son, Andrew.

On September 1, 1933, 216 Commonwealth was purchased from the Fiskes by Nellie (Ellen) C. (Crowley) Brennan, the wife of real estate dealer Joseph P. Brennan. They lived in Brookline.

That same month, she filed for (and subsequently received) permission to convert the property from a single-family dwelling into six apartments.

The property changed hands and on May 8, 1935, was acquired by Jenny Karoline (Knudsen) Gegan, the widow of Charles Gegan. She lived at 226 Huntington and then, from 1937, at 198 Commonwealth. In August of 1935, she applied for (and subsequently received) permission to remodel the interior of 216 Commonwealth. She indicated that the current and proposed occupancy was seven units.

On October 29, 1948, 216 Commonwealth was acquired from Leo Lampasona and Nicholas Abraham by Julian F. Porter, an executive with the New England School of Watch Repair. In July of 1950, he applied for (and subsequently received) permission to install fire balconies on the front of the building. He indicated that the current and proposed use of the property was nine apartments.

On January 29, 1954, 216 Commonwealth was acquired from Julian Porter by Barnett Nathan Samuels. He and his wife, Bertha (Bessie) (Elkind) Samuels, lived in Winthrop.

In the mid-1960s, it was known as the Tyler Apartments.

On September 22, 1965, 216 Commonwealth was acquired from Barnett Samuels by Eva Stern, trustee of The Berries Trust. In May of 1969, she filed for (and subsequently received) permission to legalize the occupancy as eight apartments. The application indicates that the last legal occupancy recorded in the Building Department files was as the seven units, approved in 1935.

The property changed hands and on July 31, 1986, was purchased by Ian King, Lucy O’Laughlin, and the Waterside Corporation of New York, as general partners in B B Enterprises I. In September of 1986, B B Enterprises applied for (and subsequently received) permission to convert the property from eight to five units, significantly remodeling the building. The remodeling included a “partial extension” of the fifth floor and “structural stabilization of all floors” which was “required due to general settling of the bearing wall and past construction damage.” The remodeling was designed by Arthur Choo, architect.