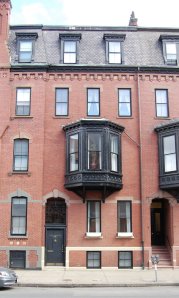 267 Clarendon is located on the east side of Clarendon, between Marlborough and Commonwealth, with 92 Marlborough to the north and 265 Clarendon to the south.

George Wheatland, Jr., purchased the land for the four houses in two transactions. On October 1, 1869, he bought the lot at the corner of Clarendon and Marlborough, with a frontage of 54 feet on Marlborough, from John Revere, and on March 23, 1870, he bought the lot to the east, with a frontage of 12 feet, from architect John H. Sturgis. Both lots had originally been part of a parcel purchased from the Commonwealth of Massachusetts on July 30, 1862, by David Snow.

The original deeds for the four houses provided a four foot wide easement at the eastern edge of the lots, running from the southeast corner of 92 Marlborough through the rear yards of 263-265-267 Clarendon, to provide for drainage and access to the alley.

Click here for an index to the deeds for 267 Clarendon, and click here for further information about the land between the south side of Marlborough and Alley 423, from Berkeley to Clarendon.

On April 11, 1871, 267 Clarendon was purchased from George Wheatland, Jr., by Annie Bartlett (Hall) Parker, the widow of wine merchant John Brooks Parker, who had died in September of 1870. Prior to his death, they had lived on West Street.

Annie Parker died in February of 1878, a victim of drowning in the Charles River. Her three children — John Brooks Parker, Jr., Annie Hall Parker, and Charles Albert Parker – each inherited a one-third interest in 267 Clarendon.

During the 1879-1880 winter season, it was the home of lawyer Andrew Fiske and his wife Gertrude Hubbard (Horsford) Fiske.  They had married in June of 1878.  Prior to their marriage, he had lived at 36 Commonwealth with his mother, Hannah Rogers (Bradford) Fiske, the widow of Augustus Henry Fiske.  By the 1880-1881 season, they had moved to 216 Commonwealth.

By the 1880-1881 winter season, 267 Clarendon was the home Mary Arnold (Allen) Robeson, the widow of textile mill owner Andrew Robeson.  She previously had lived at 150 Beacon.

She continued to live at 267 Clarendon during the 1882-1883 season, but then lived elsewhere for the next two seasons. For at least part of that time, she was traveling in Europe with her daughter, Alice (Robeson) Thayer, the widow of Stephen Van Renssaeler Thayer, and the Thayers’ son, Stephen, Jr. They lived at 191 Beacon and in Tiverton, Rhode Island.

During the 1883-1884 winter season, 267 Clarendon was the home of William Caleb Loring and his wife, Susan Mason (Lawrence) Loring.  They had married in September of 1883 and 267 Clarendon probably was their first home together.  He was an attorney and in 1899 would become a justice of the Massachusetts Supreme Judicial Court.  By the next season, they had moved to 20 Hereford.

On May 22, 1890, 267 Clarendon was acquired from Annie Hall Parker and the estate of her brother, John Brooks Parker (who had died in March of 1890, a suicide) by Louisa Minot (Davis) Luce, the wife of John Dandridge Henley Luce (sometimes called Henley Luce). They previously had lived at 30 Pinckney.

John Luce was an investment banker and later also would become president of a sugar refinery and railroad in Puerto Rico. John Luce’s father was Admiral Stephen Bleecker Luce, founder of the Naval War College at Newport; Louisa Minot (Davis) Luce was the daughter of Admiral Charles Henry Davis.

Louisa Luce’s widowed mother, Harriet (Mills) Davis, lived with them until her death in October of 1892.

John and Louisa Luce continued to live at 267 Clarendon during the 1899-1900 winter season, but spent next two seasons elsewhere.

During the 1900-1901 season, it was the home of stockbroker Erskine Clement and his wife, Louisa (Johnson) Clement.  Their principal home was in Newbury.

During the 1901-1902 season, it was the home of real estate broker Edward Wigglesworth Grew and his wife, Ruth (Dexter) Grew. They had married in April of 1901 and 267 Clarendon probably was their first home together. They had moved by the 1902-1903 season, and by the next season were living at 238 Marlborough.

From 1904 through 1907, 267 Clarendon also was the home of John Jameson Cairnes and his wife, Amabel (Winslow) Cairnes. He was a prominent amateur tennis player. By 1908, they had moved to 157 Beacon.

Louisa Luce died in April of 1907. John Luce inherited 267 Clarendon from her, and on June 7, 1907, he transferred it to their son, Stephen Bleecker Luce (known as Stephen B. Luce, Jr., because his grandfather was still living).

During the 1908-1909 winter season, John Luce and Stephen Luce were living elsewhere and 267 Clarendon was the home and medical office of Dr. Walter Channing Bailey, a physician, and his wife, Ruth (Perkins) Bailey.  They had married in June of 1908 and 267 Clarendon probably was their first home together.  Prior to their marriage, he had lived at 506 Beacon, where he also maintained his medical office.  In the spring of 1909, they purchased and moved to 269 Beacon.

John Luce and Stephen Luce continued to live at 267 Clarendon until about 1913. John Luce then moved to 112 Pinckney, and Stephen Luce – who received his doctorate from Harvard that year – traveled to Italy and Greece to study. An archaeologist and historian, in November of 1918, he became curator of the Greek and Roman Section of the University Museum in Philadelphia.

267 Clarendon was not listed in the 1913-1915 Blue Books. It also was not listed in the 1916 Blue Book, but nevertheless was the home of Allan Forbes and his wife, Josephine May Ashton (Crosby) Forbes, during the 1915-1916 winter season. They previously had lived in Westwood, where they continued to maintain a home. On March 26, 1916, the “Table Gossip” column in the Boston Globe commented that “Mr. and Mrs. Allan Forbes, who are spending the Winter at 267 Clarendon, are receiving congratulations on the birth of a son last Wednesday. The baby has been named Robert Bennett Forbes, for his great-grandfather, and is the first of the Forbes family to perpetuate that name.” Allan Forbes was president of the State Street Trust Company and author of a series of books. published by the bank, on the history of Boston and the shipping industry. By the 1916-1917 season, they had moved to 70 Beacon.

By the 1916-1917 winter season, John Luce was living at 267 Clarendon again.  In June of 1917, he applied for (and subsequently received) permission to cut a window through an outside wall (probably in the rear façade) and build a new bathroom.  The remodeling was designed by architects Little and Browne.

John Luce died in January of 1921 as a result of an automobile accident in Tiverton, Rhode Island. After his death, 267 Clarendon became Stephen Luce’s Boston home. He also maintained a residence in Newport.

By 1923, Stephen Luce was joined at 267 Clarendon by his first cousin, Miss Elizabeth Davis, the daughter of Stephen Luce’s maternal uncle, Charles Henry Davis, Jr., and his wife Louisa Maria (Quackenbush) Davis. She previously had lived in Washington DC with her parents; her mother had died in September of 1920 and her father in December of 1921.

Stephen Luce married in September of 1928 to Helen Wheelwright, and they made 267 Clarendon their Boston home. At about the same time Elizabeth Davis moved back to Washington DC.

On January 5, 1965, 265 Clarendon and 267 Clarendon were acquired from S. Clifford Speed by Donald Arthur Flaherty and his wife, Marion Louise (Taylor) Flaherty. He was a real estate manager and former television news editor. They lived in an apartment at 228 Beacon.

In September of 1965, he applied for (and subsequently received) permission to convert 267 Clarendon into five apartments. He subsequently abandoned the permit.

On April 29, 1969, 267 Clarendon was acquired from the Flahertys by John D. Warner and his wife, Sheila M. Warner. They occupied the house as a single-family dwelling.

267 Clarendon was assessed as a two-family residence in 2015.