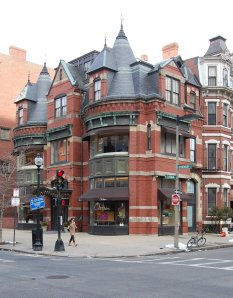 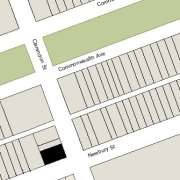 230 Clarendon (109 Newbury) was built in 1872, designed by architect Charles Amos Cummings (of the firm of Cummings and Sears) as his home.

Charles Cummings purchased the land for 230 Commonwealth on January 15, 1872, from Isaac Sweetser, who had purchased it from Newton Talbot on May 16, 1871. The lot – with 48 foot frontage on Clarendon — was the southern portion of a parcel which Newton Talbot had purchased on the same day from the Commonwealth of Massachusetts. He sold the lot to the north, with a 19 foot frontage, on January 1, 1872, to Uriah H. Coffin, a building contractor, who built 232 Clarendon on it. Newton Talbot retained the northern portion of the original parcel, with a 45 foot frontage, and had 234-236 Clarendon built on it. He and his wife, Calista (Clement) Talbot, made 236 Clarendon their home.

When Newton Talbot sold the lot for 230 Clarendon to Isaac Sweetser they entered into an agreement requiring that the houses built at 230-236 Clarendon were to be set back 7 feet 6 inches from the property line on Clarendon (with exceptions for stairs, porticos, cornices, and bays) and could be no deeper than 56 feet. The agreement also limited the height of structures in the rear yards and specified that there was to be a four foot wide passageway at the rear of the lots at 232-234-236 Clarendon to provide access to the alley. 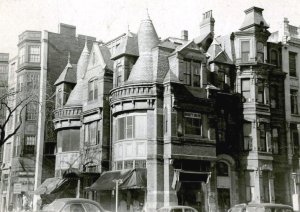 Click here for an index to the deeds for 230 Clarendon.

In early February of 1872, Cummings and Sears received a building permit for 230 Clarendon (reported in the Boston Journal on February 8, 1872).  Construction started soon thereafter. On July 19, 1872, a Boston Traveller article on “present building operations” in the Back Bay reported that “Mr. Cummings, the architect, has nearly erected the walls” of the house.

By 1873, Charles Cummings and his wife, Margaret (Kimball) Cummings, had made 230 Clarendon their home. They previously had lived at 9 Union Park.

In his Houses of Boston’s Back Bay, Bainbridge Bunting described the house as “the first Back Bay dwelling to carry the Medieval guise beyond an occasional pointed window. … this dwelling seeks to compress too many ‘Medieval’ forms” and demonstrates Cummings’s “penchant for contrasting materials: salmon-colored pressed brick, cream-colored Nova Scotia sandstone, black (tar-impregnated) brick, and slate in three colors.”

The dining room was illustrated in The Book of American Interiors, by Charles Wyllys Elliott, published in 1876. 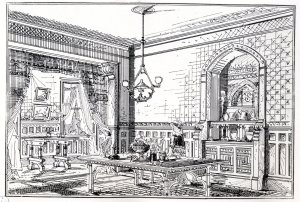 Charles Cummings died in August of 1905. Margaret Cummings continued to live at 230 Clarendon until her death in July of 1922. Their daughter, Margaret C. Cummings, lived with her.

Miss Cummings continued to live at 270 Clarendon during the 1922-1923 winter season, but moved thereafter. In May of 1923, she purchased 300 Beacon. She did not move there until about 1925 and may have been traveling abroad.

On June 4, 1923, 230 Clarendon was purchased from Charles Cummings’s estate and children, Charles Kimball Cummings and Margaret Cummings, by real estate dealer William H. Agry as trustee of a real estate investment trust he formed in 1912 with Edward N. Chase and Ralph E. Johnson.

On December 31, 1923, 230 Clarendon was acquired from William Agry by Mary Bryant (Pratt) Brandegee, the wife of real estate dealer Edward Deshon Brandegee. They lived in Brookline.

By 1925, 230 Clarendon had become a retail store and office building.

On June 24, 1935, Mary Brandegee transferred 230 Clarendon to a trust for the benefit of her children. In June of 1943, the Brandegee trust acquired 232 Clarendon. The trust continued to own both buildings until the mid-1960s.

On August 17, 1965, 230 Clarendon and 232 Clarendon were acquired from the Brandegee trust by William J. Fitzgerald and Ann B. Fitzgerald, trustees of the Fitzgerald Investment Trust.

The properties subsequently changed hands and on March 31, 1966, were acquired by Guthor, Inc.

On April 29, 1969, the City Bank & Trust Company foreclosed on the mortgages given by Guthor, Inc., and sold 230 Clarendon and 232 Clarendon to Richard L. Wing and his wife, Frances T. Wing of Malden. On January 2, 1970, the Wings transferred the property to Richard Wing as trustee of the Lee Realty Trust.

In July of 1973, the Lee Realty Trust sold 232 Clarendon to William Lewis Hodgins. The trust retained ownership of 230 Clarendon.

On November 26, 2019, the owners all transferred their interests in 230 Clarendon to the 230 Clarendon Street LLC (Gregory L. Wing, manager of record).

230 Clarendon remained a retail store and office building in 2019.