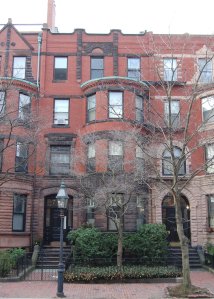 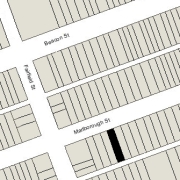 256 Marlborough was built in 1887-1888 by building contractor Silas Whiton Merrill, one of three contiguous houses (254-256-258 Marlborough) built for speculative sale. He is shown as the owner on the original building permit applications for all three houses, each dated April 14, 1887, and on the final building inspection reports for all three houses, dated May 9, 1888. Neither the applications nor the inspection reports indicate an architect.

256 Marlborough was built on a 24 foot wide lot. The eastern six inch strip, including the western half of the party wall with 254 Marlborough, was part of land Silas Merrill purchased on June 9, 1886, from the Commonwealth of Massachusetts. The remaining 23.5 feet were the eastern part of a 25 foot lot he purchased on June 8, 1886, from George B. Upton. George Upton had purchased the lot on March 30, 1886, from Richard M. Hodges, who had purchased it from the Commonwealth on February 9, 1884. Silas Merrill used the remaining 1.5 feet of the lot as part of the land for 258 Marlborough.

Click here for an index to the deeds for 256 Marlborough, and click here for further information about the land between the south side of Marlborough and Alley 426, from Exeter to Fairfield.

On August 1, 1889, 256 Marlborough was purchased from Silas Merrill by Edwin Holbrook Sampson, a paper manufacturer and dealer. He and his wife, Julia Verlinda (Wiltberger) Sampson, made it their home during the 1889-1890 winter season. They previously had lived at the Hotel Oxford (southeast corner of Exeter and Huntington). By the 1890-1891 season, they had moved back to the Hotel Oxford.

On September 24, 1890, 256 Marlborough was purchased from Edwin Sampson by Isaac Homer Sweetser, an attorney. He was unmarried and his mother, Elizabeth Seaver (Soule) Sweetser, widow of insurance executive Isaac Sweetser, and his sister, Ida Elizabeth Sweetser, lived with him. They previously had lived at 19 Monument Square in Charlestown, where his father had died in August of 1887.

Elizabeth Sweetser died in April of 1895.

During the early 1900s, and possibly earlier and later, their cousin, Helen M. Sampson, was living with them.  She was the daughter of their mother’s brother-in-law and sister, Sylvanus Sampson and Mary Chapman (Soule) Sampson.  Sylvanus Sampson does not appear to have been closely related to Edwin Holbrook Sampson, the original owner of 256 Marlborough.

Ida Elizabeth Sweetser died in May of 1929. 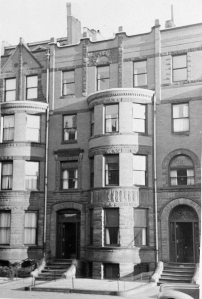 On May 27, 1932, 256 Marlborough was acquired from George Holden by Katherine (Phister) Cowin, the widow of US Army Colonel William Benton Cowin.  Their son and daughter,  John Phister Cowin and Jean Cowin, lived with her.

John Cowin was killed in an automobile accident in August of 1933.

Katherine Cowin and Jean Cowin continued to live at 256 Marlborough in 1935, but moved thereafter to an apartment in The Colonial at 382 Commonwealth.  By 1936, Katherine Cowin was treasurer of the International Institute of Boston at 190 Beacon.

On December 26, 1935, 256 Marlborough was purchased from Katherine Cowin by leather merchant Albert F. Gordon and his wife, Sarah V. (Flanagan) Gordon.  They previously had lived in Brookline.   In February of 1936, Albert Gordon applied for (and subsequently received) permission to remodel the interior to add an elevator.

They continued to live at 256 Marlborough until his death in March of 1948.

On August 31, 1948, 256 Marlborough was acquired from Albert Gordon’s estate by real estate dealer Thomas J. Diab. In September of 1948, he applied for (and subsequently received) permission to convert the house from a single-family dwelling into a five apartments.  On October 15, 1951, he transferred the property to his firm, Baid Realty Corp. (Biad being Diab spelled backwards).

On October 18, 1955, 256 Marlborough was acquired from Baid Realty by Mrs. Helen A. (Lawrence/Laurence) Durkin, the former wife of Oswald Joseph Durkin. She lived at 3 Fairfield.

On April 24, 1958, 256 Marlborough was acquired from Helen Durkin by Peter J. McDonagh and his wife, Anna C. McDonagh.

On May 31, 1961, the property was acquired from the McDonaghs by Herbert S. Hoffman and Ida S. Hoffman, trustees of the Sidney Trust.

On June 29, 1962, it was acquired from the Hoffmans by real estate dealer Shirley Clifford Speed.

On September 19, 1962, 256 Marlborough was acquired from S. Clifford Speed by real estate dealer Peter A. Mead.  He and his wife, Sara D. Mead, lived in one of the apartments.  In 1969, they combined the units on the first and second floors, creating a duplex apartment for themselves and reducing the number of units from five to four.

256 Marlborough continued to be assessed as a four- to six-family dwelling in 2021.