190 Beacon is located on the north side of Beacon, between Clarendon and Dartmouth, with 188 Beacon to the east and 192 Beacon to the west.

190 Beacon was built in 1864-1865, one of a pair of houses (188-190 Beacon), the two houses unified by a single mansard roof above a dentil cornice, but each with a distinct façade. 190 Beacon is 20 feet wide and has a bow front and central entrance; 188 Beacon is 25 feet wide and has an octagonal bay to the west with the entrance to the east.

In his Houses of Boston’s Back Bay, Bainbridge Bunting does not attribute 188-190 Beacon to a specific architect. However, an August 19, 1865, article in the Boston Daily Advertiser indicates that they were designed by architects Snell and Gregerson. 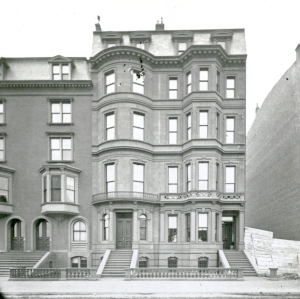 Click here for an index to the deeds for 190 Beacon, and click here for further information on the land on the north side of Beacon, including the Storrow Memorial Embankment on the Esplanade.

On April 3, 1863, Frederic Grand d’Hauteville sold the 20 foot lot to west to Thomas Forbes Cushing, who built his home there. He previously had lived at 170 Beacon with his brother and sister-in-law, John Gardiner Cushing and Susan Prescott (Dexter) Cushing. Another brother, Robert Maynard Cushing, lived at 168 Beacon. They were sons of John Perkins Cushing, a partner in the shipping merchant firm of Perkins & Company founded by John P. Cushing’s maternal uncle, Thomas Handasyde Perkins.

190 Beacon probably was completed in the fall of 1865. The August 19, 1865, Advertiser article notes that the workmen were “putting on the ‘finishing touches’” at both 188 and 190 Beacon and they would be “ready for occupancy inside of three months.” It also comments that the “main feature” of 190 Beacon “will be the large and elaborately finished entrance hall.”

Thomas Cushing married in June of 1866 to Fanny Leslie Grinnell, and they made 190 Beacon their Boston home. They also maintained a home in Newport.

Thomas and Fanny Cushing continued to live at 190 Beacon in 1873, but moved soon thereafter to a newly built home at 163 Marlborough. He continued to own 190 Beacon and lease it to others.

By 1877, 190 Beacon was the home of Thomas Quincy Browne and his wife, Juliet Frances (Wheildon) Browne.  They previously had lived at 156 Beacon.

T. Quincy Browne was a shipping merchant.  He also served as president of the Atlantic National Bank and as treasurer of the Assabet Manufacturing Company until it was acquired by the American Woolen Company.

On August 27, 1879, the Boston Globe reported that a “drove of cattle was being driven through Beacon street early yesterday morning on their way to Brighton, when they broke down the free-stone fence in front of 188 and 190 Beacon street.”

On December 24, 1885, 190 Beacon was acquired from Thomas Cushing by Abbie Kinsley (Norman) Prince, the wife of Frederick Henry Prince. They had married in March of 1884. Prior to their marriage, he had lived at 311 Beacon with his parents, Frederick Octavius Prince and Helen Susan (Henry) Prince, and she had lived at 343 Beacon with her parents, George H. Norman and Abbie (Durfee Kinsley) Norman, and her grandmother, Abbie (Durfee) Kinsley, the widow of Rufus Bent Kinsley. A December 27, 1885, “Table Gossip” item in the Boston Globe indicated that Abbie (Durfee) Kinsley had given 190 Beacon to her granddaughter as a Christmas present.

Frederick Henry Prince was an investment banker and broker. A major promoter of and investor in railroads and steel companies, he also developed the Union Stockyards in Chicago, of which he served as Chairman. In 1933, Time magazine described him as “generally regarded as New England’s richest citizen and Boston’s crustiest celebrity.”

The Princes also maintained a home, Princemere, in Wenham/South Hamilton (which became the site of Gordon College in 1955), and homes in Biarritz and Pau, France. In 1932, he purchased Oliver Hazard Perry Belmont’s Marble House in Newport.

Their younger son, Norman Prince, was the founder of the Lafayette Escadrille air squadron in World War I and was killed in action in October of 1916.  After his death, their older son, Frederick, Jr., joined the squadron, taking his brother’s place.

In November of 1885, Frederick Prince applied for (and subsequently received) permission to construct a stable at the rear of the house.  The addition was designed by architects Bradlee, Winslow, and Wetherell (shown as Bradlee, Winslow & Co. on the November 19, 1885, building permit application). 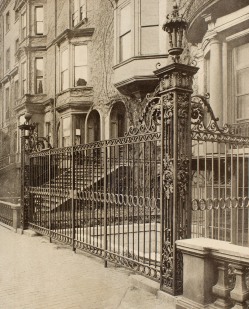 Entry gate to lowered entrance at 190 Beacon, ca. 1901; from an album kept by Herbert W. C. Browne and donated in 1951 to the Boston Athenaeum

In 1901, Frederick Prince retained the firm of Little and Browne to remodel the house, including lowering the entrance to street level. Herbert Wheildon Cotton Browne of Little and Browne was the son of Thomas and Juliet Browne who had lived at 190 Beacon in the late 1870s and early 1880s.

On December 23, 1901, the house was damaged by a fire caused by overheated electric wires in the walls on the second floor. The Boston Herald reported that the fire occurred while the house was being “made ready” for a party in honor of Frederick Prince’s niece, Helen Prince, the daughter of Charles Albert Prince and Helen (Pratt) Prince, who lived in France. The Herald article noted that the damage was not extensive and the “renovation of the house will not be delayed by the blaze, and it is not thought it will be necessary to postpone the ‘coming out party’ for Miss Prince.”  However, the party subsequently was held at the Algonquin Club on January 6, 1902.

The Princes continued to live at 190 Beacon until about 1907, after which they made their home at Princemere.

On August 30, 1907, 190 Beacon was purchased from Abbie Prince by Francis Shaw, a widower, who lived there with his son and daughter, Francis Shaw, Jr., and Miriam Shaw.  They previously had lived in Brookline and, before that, at 23 Commonwealth with his mother, Cora (Lyman) Shaw, the widow of Gardiner Howland Shaw.

By the 1917-1918 winter season, Miriam Shaw was once again living at 23 Commonwealth with her grandmother, Cora Shaw. She continued to live with her until the

Francis Shaw and his son continued to live at 190 Beacon during the 1918-1919 winter season, but then moved to their farm in Wayland. In January of 1920, at the time of the 1920 US Census, Francis Shaw and his son were living in Wayland and Miriam Shaw was living in Harvard, Massachusetts (where she continued to live at the time of her death in June of 1982).

On October 11, 1920, 190 Beacon was purchased from Francis Shaw by Alma Gleason (Oswald) Ward, the wife of Richard Ward. They previously had lived in Lawrence. They also maintained a home, Stew Pan, in Swampscott.

Richard Ward was a manufacturer of braid and cotton fabric, and treasurer of the Matson Lace Tipping Machine Company.

In October of 1922, they filed for (and subsequently received) permission to remodel the stables at the rear of the property into a two-car garage, designed by architect R. Clipston Sturgis.

On September 7, 1927, 190 Beacon was purchased from Elliott Henderson by Allison G. Catheron, Caroline Thurber, and E. Louise Malloch, trustees of the Girls City Club Trust, formed in June of 1920 to “provide, equip, furnish and maintain a building or buildings and/or a room or rooms for the use of the Girls’ City Club.” The Club currently leased space at 8 Newbury.

In October of 1927, the club filed for (and subsequently received) permission to convert the house from a single-family dwelling into their clubhouse. It opened in December of 1927.

The Girls’ City Club subsequently incorporated and on December 11, 1929, the trustees determined that the “character, purposes, and form of organization” had sufficiently changed that it no longer was the appropriate beneficiary of the trust. It concluded that the Boston Young Women’s Christian Association was “furnishing opportunities for education, recreation and social enjoyment for girls and women” and therefore was the appropriate beneficiary.

The Girls’ City Club of Boston moved to 504 Boylston and 190 Beacon became the YWCA’s International Institute House. It previously had been located at 12 Newbury.

The International Institute of Boston was established in 1924, part of a national effort started in 1910 in New York City by Edith Terry Bremer under the auspices of the YMCA. It’s goal was to assist newly arrived and second-generation immigrant girls and women by providing English classes, recreational and club activities, and assistance in dealing with employment, housing, naturalization, and other problems. Among the organization’s principles was “keeping close to the thinking of foreign communities as a whole” and, towards that end, the Boston Institute began with a staff drawn from a diverse group of nationalities. The overall goal, as summarized in Raymond A. Mohl’s The International Institute Movement and Ethnic Pluralism was that “diversity rather than conformity, cooperation rather than conflict, was the essence of American democracy.”

In 1935, the International Institute of Boston joined a number of chapters in other cities in ending its affiliation with the YWCA and forming a new national organization, the National Institute of Immigrant Welfare, which Edith Terry Bremer was the founder and first executive director.

On June 16, 1937, the Provident Institution for Savings in the Town of Boston foreclosed on its mortgage on 190 Beacon to Elliott Henderson, the liability for which had been assumed by the Girls’ City Club Trust, and on the same day transferred the property to the International Institute of Boston, Inc.

In June of 1939, the Institute filed for (and subsequently received) permission to change the legal occupancy from a clubhouse to “social services and group activities.”

190 Beacon continued to be the International Institute’s headquarters until about 1964, when it purchased and moved to 287 Commonwealth.

On March 26, 1964, 190 Beacon was purchased from the International Institute by real estate dealer Samuel Wasserman and his wife, Ella Frances (Brennan) Wasserman.

On June 15, 1964, 190 Beacon was purchased from the Wassermans by Samuel Dame and David B. Kaplan, trustees of the K & D Realty Trust. The house was vacant in July of 1964, but soon thereafter they entered into an agreement with Emerson College to operate a dormitory on the premises.

In September of 1964, they filed for (and subsequently received) permission to convert the property from “social work and dormitory” to a dormitory and one apartment.

190 Beacon remained a dormitory until 1974. In that year, K & D Realty Trust filed an application change its occupancy to be a lodging house for 36 lodgers, noting that “because of lowering enrollment figures, the demand for such dormitory space has lessened, while the need for general lodging facilities has increased.” The application was denied and the Board of Appeal refused to grant K & D Realty Trust’s appeal.

On January 12, 1976, 190 Beacon was acquired from Samuel Dame and David Kaplan by Keevin Geller. In December of 1975, he filed for (and subsequently received) permission to convert the house from a dormitory and one apartment into seven apartments

On May 24, 2021, the unit owners amended the master deed to combine two units and reduce the number of units from seven to six.