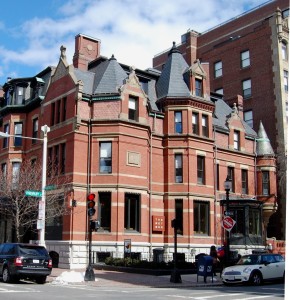 277 Dartmouth was designed by architect J. Pickering Putnam and built in 1878-1879 for his mother, Mrs. Harriet (Upham) Putnam, the widow of John Pickering Putnam. He and his sister, Sarah Gooll Putnam, a portrait artist, lived with her. They all previously had lived at 78 Marlborough.  Harriet Putnam also maintained a home in Nahant.

Harriet Putnam purchased the land for 277 Dartmouth on December 2, 1878, from attorney Harvey Jewell. He had purchased the lot on January 24, 1872, from Charles Austin Wood, an insurance agent and real estate investor, and the original owner of the Hotel Vendôme. It was the southern portion of a parcel he had purchased from the Commonwealth of Massachusetts on November 15, 1870. On the same day he purchased the parcel, Charles Wood had sold the northern portion to builder James Standish, who built 279-281-283 Dartmouth on the land.

Click here for an index to the deeds for 277 Dartmouth.

J. Pickering Putnam married in June of 1885 to Grace Cornelia Stevens.  After their marriage, they lived at the Hotel Berkeley (southeast corner of Berkeley and Boylston).

By the 1899-1900 winter season, and probably before, Harriet Putnam had been joined at 277 Dartmouth by her daughter, Mrs. Mary Upham (Putnam) Fearing.  Mary Fearing was living apart from her husband, retired stockbroker Charles Frederick Fearing, who traveled extensively.  He died in April of 1901.

Harriet Putnam died in May of 1905.  Following their mother’s death, Mary Fearing and Sarah Putnam traveled abroad.  By 1909, they were living at The Charlesgate at 535 Beacon with their brother and sister-in-law,  J. Pickering and Grace Cornelia Putnam (he had designed The Charlesgate and was one of its owners).  By 1911, Mary Fearing and Sarah Putnam had moved to 333 Beacon.

By the 1906-1907 winter season, 277 Dartmouth had been leased from Harriet Putnam’s estate by Mrs. Mary (May) Adeline (Bradbury) Estes, former wife of Prince Joseph Estes, and had become a combination of medical offices and lodgings under Mrs. Estes’s management.   She had lived and operated a lodging house at 281 Dartmouth from about 1898, and from 1900 had also rented 279 Dartmouth, where she also ran a lodging house.

After acquiring the property, Mary Morrison remodeled the basement and first floor to provide for a dress shop, millinery shop, and workroom.  Plans for the remodeling are included in the City of Boston Blueprints Collection in the Boston City Archives (reference BIN D-55, shown as A-63 on the plans).

By 1911, it had become the home of Mrs. Morrison’s mother, Ann (Kennard) Ruby, the widow of James Ruby, and also the location of Mary Morrison’s import and dressmaking shop, Mary Ruby, Inc.

In February of 1912, Mary Morrison acquired 279 Dartmouth, and she and her husband had made it their home. Mary Estes continued to live and operate a lodging house at 281 Dartmouth.

William Langley Morrison died in April of 1915.  Mary Morrison continued to live at 279 Dartmouth and operate Mary Ruby, Inc., at 277 Dartmouth. Her mother lived with her until her death in January of 1931.  Mary Morrison’s daughter, Mary Langley Morrison, an architect and interior designer, also lived with her. She married in the late 1920s to John E. Kennedy, a broker and later an advertising agency executive. They lived at 97 Mt. Vernon after their marriage, but had joined Mary Morrison at 279 Dartmouth by 1932.

By 1934, the Dartmouth Bookstall also was located at 277-279 Dartmouth.  Both businesses continued there until about 1946: Mary Ruby, Inc., on the corner in 277 Dartmouth and the Dartmouth Bookstall in a storefront at 279 Dartmouth.  Mary Morrison’s daughter, Mary Morrison Kennedy, also operated an interior decorator’s studio at 277 Dartmouth (in the 1940s, she joined the Sheraton Corporation and, according to her June 7, 1989, obituary in the New York Times, “for almost thirty years was in charge of interior design for the 45-hotel chain”).

Mary Morrison and the Kennedys continued to live at 279 Dartmouth until about 1941, when they moved to 9 Hereford.

On February 11, 1941, 277-279 Dartmouth were acquired from Mary Morrison by the Massachusetts Hospital Life Insurance Company, which acquired the property for the amount of the mortgages it held on the properties.

On January 31, 1946, 277-279 Dartmouth were acquired from the Massachusetts Hospital Life Insurance Company by Joseph P. Gallinetti., who opened Joseph’s restaurant at 279 Dartmouth. He and his wife, Olivia Florence (Taves) Gallinetti, lived at 277 Dartmouth and continued to lease space in both buildings to others. Mary Ruby, Inc., and the Dartmouth Bookstall moved across the street, to 284 Dartmouth, and in 1946, 277-279 Dartmouth was being used as the Republican campaign headquarters.

Joseph’s restaurant continued to operate and in the early 1950s expanded into 277 Dartmouth. In about 1956, Joseph’s expanded further into the street level of 281 Dartmouth, which Uptown Realty subsequently acquired in October of 1964. In 1979, Joseph’s was acquired by Charles Sarkis and Jack Sullivan, who renamed it Joe’s American Bar and Grill.

The property subsequently changed hands and in April of 1991, the three parcels were combined into one property, with the lower level remaining a restaurant and the upper floors used for offices.

Below is a panoramic view taken ca. 1903, with 277-281 Dartmouth on the left and the Hotel Victoria at 273 Dartmouth in the center; photograph by E. Chickering & Co., provided courtesy of the Library of Congress.