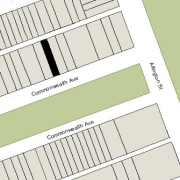 11 Commonwealth was designed by architect Nathaniel J. Bradlee and built ca. 1868, one of two contiguous houses (11-13 Commonwealth) built for merchant Frederick Hall Bradlee.  Although they shared the same surname, it does not appear that Nathaniel Bradlee and Frederick Bradlee were closely related.

Click here for an index to the deeds for 11 Commonwealth, and click here for further information about the land between the north side of Commonwealth and Alley 422, from Arlington to Berkeley.

On September 1, 1868, Frederick Bradlee sold 11 Commonwealth to his daughter, Elizabeth Gair (Bradlee) Abbot, the wife of dry goods commission merchant Henry Ward Abbot. They made it their home. They previously had lived at 8 Louisburg Square.

Elizabeth Bradlee Abbot married in June of 1881 to Frederic Jessup Stimson, an attorney, and they moved to Dedham.  Frederic Bradlee Abbot moved to Worcester in about 1885 and married in July of 1888 to Cora Anderson; they later lived in Sharon. Lucretia (Lulu) Wainwright Abbot married in December of 1894 to Jean Mure, an instructor of French at Harvard; after their marriage, they lived at the Hotel Brunswick (southeast corner of Clarendon and Boylston).  Henry Ward Abbot, Jr., married in May of 1898 to Isobel Anderson; after their marriage they lived at 11 Commonwealth with his mother.  Henry Abbot was an artist and noted ornithologist.

Elizabeth Abbot died in December of 1902, and Henry and Isobel Abbot moved soon thereafter, probably to Yarmouthport where they were living at the time of the 1910 US Census.

On May 2, 1904, 11 Commonwealth was purchased from the estate of Elizabeth Abbot by Mary Ellen (Ruby) Morrison, the wife of architect William Langley Morrison. In 1904, they had lived at 83 Beacon.

By the 1909-1910 winter season, it was the home of wool merchant Jacob Frederick Brown and his wife, Mariette Starr (Seeley) Brown.  They previously had lived in an apartment at 330 Dartmouth.

The Browns first leased 11 Commonwealth from Mary Morrison, but on June 9, 1919, Jacob Brown purchased the house from her. That same month, he applied for (and subsequently received) permission to construct a three-story rear addition to provide for a conservatory, pantry, and bathroom.  The addition was designed by architect Edwin Sherrill Dodge.

On April 18, 1930, 11 Commonwealth was acquired from Jacob Brown by publisher Charles Edward Bacon. He and his wife, Pauline (Conant) Bacon, made it their Boston home. They previously had lived at the Hotel Somerset.  They also maintained a home in Manchester-by-the-Sea.

In May of 1937, they applied for (and subsequently received) permission to construct a two-room 12 foot by 22 foot rear addition on the second and third floors.  This addition also was designed by Edwin Sherrill Dodge.

On June 25, 1951, Charles Bacon transferred the property into both his and his wife’s names.

Charles Bacon died in March of 1958.  Pauline Bacon continued to live at 11 Commonwealth.  In July of 1959, she applied for (and subsequently received) permission to add a kitchen and bathroom on the sixth floor, converting the house from a single-family to a two-family dwelling.

She continued to live at 11 Commonwealth until about 1963.

On September 6, 1963, 11 Commonwealth was acquired from Pauline Bacon by Elizabeth (Kayhart) Dare Pendleton Heller, the wife of Louis E. Heller. They previously had lived at 165 Mt. Vernon, and before that at 33 Marlborough. Louis Heller was a real estate dealer; Elizabeth Heller was a former actress.

In July of 1964, the Hellers applied for permission to convert the property into a three-family dwelling. The subsequently abandoned the application.

On October 25, 1985, 11 Commonwealth was purchased from Elizabeth Heller by Richard K. Bendetson.

On January 12, 1989, it was acquired from Richard K. Bendetson by Gerald S. Fineberg, and on November 27, 1989, it was purchased from him by Rev. Barbara H. Nielsen, an Episcopal clergywoman and counseling psychologist. On November 20, 2012, she transferred the property to Rosanne Duane as trustee of the Nielsen Realty Trust.