297 Commonwealth was designed by Peabody and Stearns, architects, and built in 1899-1900 by Woodbury & Leighton, contractors and builders, for textile machinery manufacturer George Albert Draper and his wife, Jessie Fremont (Preston) Draper. They lived in Hopedale, where George Draper’s firm was located, and built 297 Commonwealth as their winter home. Jessie P. Draper is shown as the owner on the original building permit application, dated November 6, 1899.

Plans for the house are included in the Peabody and Stearns Collection in the Boston Public Library’s Arts Department (reference PS/MA.051).  The plans reference a November 2, 1899, contact between Jessie Draper and Woodbury & Leighton.

Click here to view the original plans for 297 Commonwealth, and click here for further information about the land between the north side of Commonwealth and Alley 428, from Gloucester to Hereford.

Jessie Draper purchased the land for 297 Commonwealth on May 16, 1899, from George A. Nickerson, the eastern 45 feet of a 78 foot wide lot he had purchased on January 19, 1895, from Gordon Dexter. George and Ellen (Touzalin) Nickerson had built their home at 303 Commonwealth on the western 33 feet of the lot, and when they sold Jessie Draper the lot to the east, they specified that only a single-family dwelling could be built at 297 Commonwealth and that no bay or bow could be built within ten feet of 303 Commonwealth.

The land where 297 Commonwealth and 303 Commonwealth were built previously had been part of a 185 foot parcel purchased by building contractor George Wheatland, Jr., on May 10, 1872, from a real estate investment trust formed by Grenville Temple Winthrop Braman, Henry Dwight Hyde, and Frank William Andrews. It was part of one of several tracts of land purchased by the trust on March 1, 1872, from the Boston Water Power Company.

Click here for an index to the deeds for 297 Commonwealth.

By the 1900-1901 winter season, George and Jessie Draper had made 297 Commonwealth their Boston home. Their two surviving children — Wickliffe Preston Draper and Helen Howard Draper — lived with them.

Helen Draper married in February of 1917 to Walbridge Smith Taft, the nephew of President William Howard Taft. After their marriage, they lived in New York City.

Jessie Draper, who had been ill for several months, died the day after her daughter’s marriage.

Wickliffe Draper served in the British army and then the American army during World War I, and then resumed living with his father.

George Draper died in February of 1923.

After his death, Wickliffe Draper traveled abroad and then lived in New York City and Hopedale.  He became an ardent eugenicist, advocate of racial segregation, and supporter of various ultra-conservative causes.  Helen (Draper) Taft also moved from 297 Commonwealth, probably to the Draper home in Hopedale where she married again in May of 1924 to Nathaniel Farwell Ayer.  They lived at 518 Beacon (which had been his home prior to their marriage) and in Hopedale and Marblehead.

On June 7, 1923, 297 Commonwealth was purchased from George Draper’s estate by retired leather merchant Charles Anderson Proctor. He and his wife, Grace (Hopkins) Proctor, made it their home. They previously had lived at 34 Gloucester. They also maintained a home at Little Point in Swampscott. 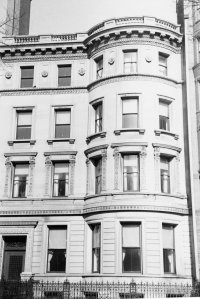 Charles Proctor’s mother, Ellen Augusta (Perkins) Proctor, lived with them until shortly before her death in January of 1930.

Charles Proctor died in February of 1936.  Grace Proctor continued to live at 297 Commonwealth until about 1939.

On May 21, 1942, 297 Commonwealth was acquired by Dr. Royal Lee. He was a dentist in Elm Grove, Wisconsin, where he and his wife, Evelyn Alice (Egan) Lee, lived. He was founder of the Vitamin Products Company (later Standard Process Laboratories) and in 1941 established the Lee Foundation for Nutritional Research to promote the use of natural vitamin supplements. He also was an inventor and developed the “Lee Governor” used as a part of various tools and machinery, including as a component in the Norden bombsight used during World War II.

On April 28, 1947, 297 Commonwealth acquired by the Society of Jesus of New England. In May of 1947, it applied for (and subsequently received) permission to convert the property into a residence for fifteen priests.

The residence, known as Loyola House, remained there until the 1980s.

In October of 1987, James A. Magliozzi of J. F. White Properties applied for (and subsequently received) permission to convert the property from a residence for fifteen priests into six apartments and a five-car garage.

On November 4, 1988, after receiving approval of the proposed conversion of the property, James A. Magliozzi, Peter T. White, and Robert P White, trustees of the Investor Equity Trust, purchased 297 Commonwealth from the Society of Jesus of New England.

On May 18, 1989, they converted the property into six condominium units, the 297 Commonwealth Avenue Condominium. 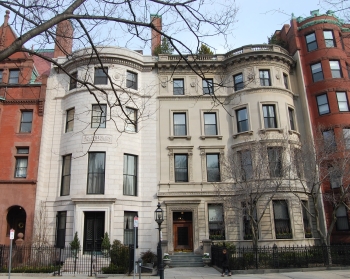