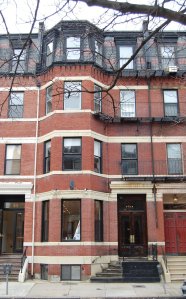 34 Gloucester is located on the west side of Gloucester, between Commonwealth and Newbury, with 32 Gloucester to the north and 36 Gloucester (279-A Newbury) to the south.

34 Gloucester was built in 1880-1881 by Frank Jones, mason, and E. C. Landers, carpenter, for building contractor William Seavey Rand, one of four contiguous houses (30-32-34-36 Gloucester) designed as a symmetrical composition and built for the Boylston National Bank of Boston, owner of the land, for speculative sale. William Rand is shown as the owner on the original permit applications, dated May 26, 1880. No architect is indicated on the applications.

The land for 30-32-34-36 Gloucester was part of a parcel acquired by the Boylston National Bank on June 2, 1876, from Nathan Matthews. The parcel also included the lots where 284-286-288 Commonwealth were built. William S. Rand also built the houses at 286-288 Commonwealth for the bank. The parcel was part of a larger tract of land originally purchased by Nathan Matthews on January 2, 1871, from David Sears, Jr., Frederick R. Sears, and Knyvet Sears.

Click here for an index to the deeds for 34 Gloucester.

When the completed houses were sold by the Boylston National Bank, the deeds included a four foot wide easement at the rear of 30-32 Gloucester to provide access to the alley for 32-34 Gloucester, and specified the right of all four houses to build sewer drains to the alley.

On November 22, 1881, 34 Gloucester was purchased from the bank by Charles Whipple Smith, a real estate and insurance broker, and his wife, Harriet Elizabeth (Farnsworth) Smith. They continued to live there during the 1888-1889 winter season, but moved thereafter to 302 Marlborough.

On October 12, 1889, 34 Gloucester was purchased from Charles Smith by Meta Telfair (Wilson) Pitts, the widow of Charles Hall Pitts.  Charles Pitts had been a bank cashier; he had died in November of 1887, less than a month after their marriage.  They were living at the Parker House hotel at the time of his death.  She continued to live at 34 Gloucester until her death in January of 1897.

On July 20, 1897, 34 Gloucester was purchased from Meta Pitts’s estate by John Chase Howe, a dealer in dye stuffs, paint, and isinglass. He had married earlier that month to Mabel Allison Yates, and later that month, his daughter, Marie, married Mabel Yates’s brother, Walter Yates, a ship chandler. John and Mabel Howe and Walter and Marie Yates lived at 31 Gloucester.

On August 30, 1897, John Howe transferred 34 Gloucester to his daughter, who leased it to others.

By the 1898-1899 winter season, 34 Gloucester was the home of Linzee Prescott and his wife, Frances (Brown) Prescott. They previously had lived in Greenwich, Connecticut. He was treasurer of the Atlantic Cotton Mills. The Prescotts continued to live at 34 Gloucester during the 1900-1901 season, but moved thereafter to 30 Gloucester.

John and Mabel Howe and Walter and Marie Yates had moved from 31 Gloucester to 29 Gloucester in 1899, and John Howe had died in September of 1901. Marie Howe and the Yateses had continued to live at 29 Gloucester during the 1901-1902 winter season, but moved thereafter to 34 Gloucester.

John and Marie Yates and Mabel Howe continued to live at 34 Gloucester during the 1909-1910 winter season.  By 1911, the Yateses (and probably Mabel Howe) were living in West Manchester.

On July 27, 1910, 34 Gloucester was purchased from Marie Yates by Grace (Hopkins) Proctor, the wife of Charles Anderson Proctor. They previously had lived at 42 Gloucester.

On November 28, 1917, Grace Proctor transferred the property into her husband’s name.

Charles Proctor was a leather merchant.  He retired in 1918.

During the 1922-1923 winter season, 34 Gloucester was the home of real estate broker and investor John Babson Thomas and his wife, Marietta (Shea) Reece Thomas.  John Reece, her son by her previous marriage to John Reece (inventor of the buttonhole sewing machine), lived with them.   They had all previously lived at 315 Commonwealth.  They had moved from 34 Gloucester by the next season, and were living at 20 Hereford by the 1924-1925 season.

On July 31, 1923, 34 Gloucester was acquired from Charles Proctor by Grace Fletcher (Blanchard) Cole, the wife of Brigadier General Charles H. Cole. They previously had lived at 90 St. Mary’s.

General Cole served as Chairman of the Boston Police Commission from 1905 to 1907, and as Boston’s Fire Commissioner from 1912 to 1914.  From 1914 to 1916, he was Adjutant General of Massachusetts.  During the World War I, he served in France with the rank of Brigadier General (his brother, Edward Ball Cole, was killed at the Battle of Belleau Wood).  In 1928, he was the Democratic nominee for Governor, losing to Frank G. Allen.  In 1934, he was defeated for the Democratic nomination for Governor by Boston Mayor James Curley.

By 1950, Charles Cole had been joined at 34 Gloucester by Dorothy C. Baker, a housekeeper. On March 13, 1951, she acquired 34 Gloucester from him. He moved soon thereafter and died in November of 1952 at the Soldiers’ Home in Chelsea.

The property changed hands and on December 15, 1952, was acquired by Abraham S. Boyadjian. In March of 1953, he applied for permission to convert the property from a single-family dwelling into a lodging house with an office on the first floor.  His application was denied and he did not appeal the denial.

Notwithstanding the denial, the property was used for these purposes.  From 1953 to about 1958, it was the location of the Spaulding Brick Company (operated by Elizabeth S. Spaulding, who lived in Sharon), and also was a multiple dwelling.

On March 15, 1962, 34 Gloucester was acquired from John Harutunian by Robert Osborne Tillinghast. He also leased 33 Gloucester and owned 29 Gloucester, 211 Beacon, and 278–280 Commonwealth.

On May 7, 1962, 34 Gloucester was acquired from Robert Tillinghast by the First Community Investment Co., Inc. of Lexington. On the same day, it also acquired 29 Gloucester, 211 Beacon, and 278–280 Commonwealth from him. On July 3, 1962, it transferred the properties to Robert J. McHugh, trustee of the Mifro Realty Trust.

In August of 1964, the Mifro Realty Trust applied for (and subsequently received) permission to convert 34 Gloucester from a single-family dwelling into a lodging house.

Chamberlayne may have used 34 Gloucester as a dormitory; however, was shown as vacant in the 1967-1972 City Directories.

On October 12, 1976, Arthur E. Simons purchased 34 Gloucester from Bernard Rome. On the same day, he transferred the property to himself and Ronald Luccio as trustees of the B & L Trust.

On November 19, 1976, 34 Gloucester was purchased from Arthur Simons and Ronald Luccio by Rafael Pons, trustee of the R. S. V. P. Realty Trust. In December of 1978, he applied for (and subsequently received) permission to legalize the occupancy as three apartments and a retail store, which he indicated was the existing condition.

In November of 1983, he applied for permission to cut doors between 34 Gloucester and 36 Gloucester (279-A Newbury) at the basement level and install a kitchen for use in conjunction with a restaurant to be located at the other property. The application was denied and his appeal was dismissed.

On December 5, 1986, 34 Gloucester was purchased from Rafael Pons by Barbara Ware Emmel, trustee of the B. W. E. Realty Trust.

The property changed hands, remaining a mixed residential and commercial building in 2017.