The block on the north side of Commonwealth between Gloucester and Hereford is 375 feet in length and 124 feet 6 inches from Commonwealth to Alley 428.

The company sold all its land in large parcels, almost exclusively to real estate investment trusts which then subdivided the land and resold it. It sold land in 1863, 1866, 1868, and 1872, by which point it had sold all of its land between the Commonwealth’s lands and a line 125 feet west of Massachusetts Avenue (West Chester Park). It sold the remainder of its land in the residential portion of the neighborhood in 1880.

On March 1, 1872, the company sold the land on the north side of Commonwealth between Gloucester and Hereford to a real estate investment trust – known as the Beacon Street Lands Trust – formed by Grenville T. W. Braman, Henry D. Hyde, and Frank W. Andrews. It was one of several parcels acquired by the Beacon Street Land Trust at the same time. The plan to the right shows all of the parcels purchased by the trust, including land on both the east and west sides of Parker Street, which ran southwest at approximately a 45 degree angle, bisecting the land between Hereford and Massachusetts Avenue.

Grenville T. W. Braman and his partners in the Beacon Street Lands Trust rapidly sold all of their land on the north side of Commonwealth between Gloucester and Hereford, subdividing it into two parcels.

On April 1, 1872, they sold the eastern 190 feet of the block to real estate dealer Henry Whitwell. On the same day, they also sold him a 106 foot parcel on the south side of Marlborough between Gloucester and Hereford.

On May 10, 1872, the trustees sold the western 185 feet of the block to building contractor George Wheatland, Jr., On the same day, they also sold him an equivalent parcel on the north side of Marlborough between Gloucester and Hereford.

Eastern Parcel. On January 5, 1878, Henry Whitwell sold the corner lot at Gloucester, with a frontage of 32 feet on Commonwealth, to Henrietta Brooks (Cross) Faxon, the wife of William Faxon, a dealer in shoe manufacturers’ goods. They lived at 62 Chester Square. On April 30, 1879, Henry Whitwell acquired the land back from her, and on March 4, 1880, he sold it to a trust established under the will of William Powell Mason for the benefit of his daughter, Elizabeth Rogers (Mason) Cabot, the wife of Walter Channing Cabot. The Cabots lived in Brookline. On April 25, 1885, the land was purchased from Elizabeth Cabot’s trust by Mary Hone (Ogden) Adams, the wife of Charles Francis Adams, Jr. The Adamses built their home at 20 Gloucester.

On November 19, 1883, Henry Whitwell sold a 28 foot lot to the west of 285 Commonwealth to William Appleton Burnham. He and his wife, Alice (Monroe) Burnham, lived at 87 Beacon. The land remained vacant and on March 11, 1891, the estate of Henry Whitwell (who had died in December of 1887) sold a 27 foot lot to the west to sugar manufacturer and real estate investor Washington Butcher Thomas. He and his wife, Caroline (Wadleigh) Thomas, lived at 285 Commonwealth. On January 19, 1892, Caroline B. (Bartlett) Sears, the wife of Herbert Mason Sears, purchased William Burnham’s 28 foot lot and Washington B. Thomas’s 27 foot lot. Herbert and Caroline Sears built their home at 287 Commonwealth.

On April 2, 1883, Henry Whitwell sold a 25 foot lot to the west of where 287 Commonwealth later would be built to Adeline Amanda (Smith) Allen, the wife of William Henry Allen. They built 291 Commonwealth as their home (there is no house numbered 289 Commonwealth).

Western Parcel. On May 25, 1872, George Wheatland, Jr., entered into a trust agreement with respect to several parcels of land he owned, including the 185 foot parcel on the western half of Commonwealth between Gloucester and Hereford. Under the agreement, he transferred two undivided one-third interests in the property, one to William Dudley Pickman and the other to William Pickering Fay, and they agreed to assume the obligation for one third (each) of the mortgages on the property. On April 18, 1876, George Wheatland, Jr., transferred the remaining one-third interest in the property to his father, George Wheatland, Sr., of Salem.

On January 2, 1880, William Pickman and the estate of William P. Fay (who had died in March of 1879) transferred their two-thirds interest in the 30 foot corner lot at Hereford to George Wheatland, Sr., and on January 10, 1880, he sold the lot to Alexander Moseley.

On June 15, 1881, William Pickman and the estate of William P. Fay transferred their two-thirds interest in a 25 foot lot to the west of the corner lot to George Wheatland, Jr., and on the same day, he sold the lot to Adeline Amanda (Smith) Allen, the wife of William Henry Allen. They lived at 15 Chester Square, and would soon build and move to 291 Commonwealth.

In March and April of 1883, J. Morris Meredith, acting on behalf of Nathaniel Thayer, Jr., and his brother, Eugene Van Rensselaer Thayer, purchased the land at the corner of Hereford, including acquiring Alexander Moseley’s corner lot on March 28, 1883, Adeline Allen’s lot on April 2, 1883, and the western 16 feet of George Wheatland, Jr.’s land, also on April 2, 1883. On May 18, 1883, Nathaniel and Eugene Thayer transferred the combined 71 foot lot to their sister, Harriet Thayer, and on July 23, 1883, she purchased an additional six foot lot to the east from William G. Weld (the western portion of a 78 foot lot he had purchased from George Wheatland, Jr., on April 2, 1883).

Harriet Thayer married in October of 1883 to John Forrester Andrew and they built their home at 32 Hereford on the western 45 feet of her land. On December 30, 1883, she transferred the remaining lot, with a 32 foot frontage, to herself and her four brothers –
Nathaniel Thayer, Jr., Eugene V. R. Thayer, Bayard Thayer, and John Eliot Thayer – and they built 305 Commonwealth as the home of their mother, Cornelia (van Rensselaer) Thayer, widow of Nathaniel Thayer.

As noted above, on April 2, 1883, George Wheatland, Jr., sold a 78 foot lot to the west of the lot he sold to Adeline Allen to William Gordon Weld, and on July 23, 1883, he sold the western six feet to Harriet Thayer. Two days earlier, William G. Weld had purchased an additional six feet to the east from George Wheatland, Jr., thereby maintaining his 78 foot frontage on Commonwealth.

A March 18, 1883, Boston Herald article on “new houses and who is building them” indicated that the 78 foot lot had purchased by William G. Weld’s son, William Fletcher Weld, Jr., “the young millionaire” who intended to erect a home that would be “placed in the middle of the lot, with free air and grass plots on both sides.”

The lot remained vacant, however, and subsequently changed hands several times. On January 19, 1895, it was purchased by George Augustus Nickerson.  He built his home at 303 Commonwealth, and on May 16, 1899, sold the eastern 45 feet to Jessie Fremont (Preston) Draper, the wife of George Albert Draper. The Drapers built their home at 297 Commonwealth (there are no houses numbered 299-301 Commonwealth).

After selling the western 100 feet of his land to Harriet Thayer and William G. Weld, George Wheatland, Jr., retained the eastern 30 feet of the 130 foot lot his father had transferred to him in March of 1883. He combined it with the 24 foot lot he had purchased from Henry Whitwell in June of 1881, and on March 9, 1889, sold the 54 foot lot to lawyer and paper manufacturer Samuel Dennis Warren, Jr. He sold the lot on May 24, 1890, to Edwin B. Horn, who built twin apartment houses at 293-295 Commonwealth.

Original Construction. All of the buildings on the north side of Marlborough between Gloucester and Hereford were built by 1899. 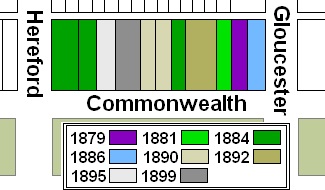 The Boston Water Power Company’s deed to Grenville T. W. Braman, Henry D. Hyde, and Frank W. Andrews, trustees of the Beacon Street Lands Trust, included language specifying that all structures were to be of brick, stone, or iron; and could not be used for livery stables, carpenters shops, white or blacksmith’s shops, or for foundry or manufacturing purposes, “or for any other business which shall be offensive to the neighborhood for dwelling houses.” The deed also required that “all buildings erected thereon shall be of good class and not less than three stories in height including basement excepting church edifices which may be of any height.” The deed did not include requirements that houses be set back from the street by any specified distance.

The deeds from the trustees to Henry Whitwell and George Wheatland, Jr., repeated the same restrictions and also specified that the front wall of houses be set back twenty feet from Commonwealth, with “steps, windows, porticos, and other usual projections appurtenant thereto” allowed in the reserved space subject to dimensional limitations enumerated in the deed.

These restrictions were similar to those contained in the deeds from the Commonwealth of Massachusetts conveying its Back Bay land, with the exception that the Commonwealth’s deeds did not specify that the buildings be made of brick, stone, or iron. The Commonwealth deeds also usually included language specifying the depth of cellars and permitting the cultivation of street trees.

The deeds from the Beacon Street Lands Trust also included language with respect to the placement of party walls on the boundary lines and the responsibility of parties using the walls to share the costs of building them. Similar language was included in deeds from the Boston and Roxbury Mill Corporation for land its land on the north side of Beacon, but was not contained in the deeds from the Commonwealth.

The Beacon Street Lands Trust sold its land on the north side of Commonwealth between Gloucester and Hereford by the following deeds: