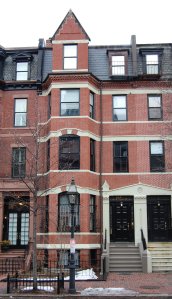 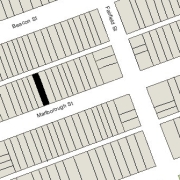 303 Marlborough was designed by L. Newcomb and Son (Edgar A. P. Newcomb), architects, and built in 1877-1878 by Abel C. Small, carpenter, one of two contiguous houses (301-303 Marlborough). The houses are designed as a complementary pair, achieving a sense of symmetry while each is distinctive in design. 301 Marlborough, on a 23.5 foot wide lot, has a square-sided bay that extends the entire height of the house and ends with peaked roof.  303 Marlborough, on a 21 foot wide lot, has an angled bay that ends below the mansard and is topped with a square-sided dormer with a peaked roof similar to that at 301 Commonwealth.

301-303 Marlborough were built for Harvard law professor James Barr Ames for speculative sale. He is shown as the owner on the original permit application, dated November 19, 1877, and on the final inspection report, dated November 18, 1878. His father, Samuel Tarbell Ames, was a building contractor credited with having built over thirty residences in the Back Bay between 1879 and 1885. At about the same time as he designed 301-303 Marlborough, Edgar A. P. Newcomb also designed two houses for James B. Ames across the street, at 294–296 Marlborough, with peaked roofs on square-sided dormers above angled bays, similar to 303 Marlborough.

James B. Ames assembled the land for 301-303 Marlborough by combining a 20 foot lot and a 24 foot lot, both of which he purchased in November of 1877. The two lots had been owned by paper manufacturer John Dixwell Thompson. He and his wife, Sally Phillips (Blagden) Thompson, lived at 287 Marlborough. He disappeared while on a trip to New York City in June of 1875 and was presumed dead, and the two lots were taken in foreclosure the next year. The 24 foot lot was acquired by J. Dixwell Thompson’s brother-in-law, Samuel Phillips Blagden, and the 20 foot lot was acquired by the estate of Sidney Homer (from whom J. Dixwell Thompson had purchased the lot); they then sold the lots to James B. Ames. 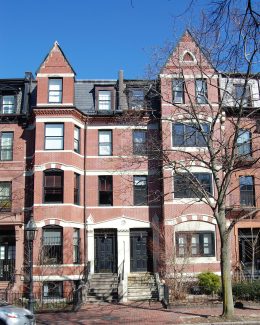 Click here for an index to the deeds for 303 Marlborough, and click here for further information about the land between the north side of Marlborough and Alley 416, from Fairfield to Gloucester.

On September 25, 1878, 303 Marlborough was purchased from James B. Ames by Lucy Ann (White) Smith, the wife of wholesale grocer William Dexter Smith. They previously lived at 31 Appleton.

Three of the Smiths’ adult children lived with them: William Dexter Smith, Jr. (called Dexter), Albert A. Smith, and Lucy Maria Smith. William and Lucy Smith were unmarried; Albert Smith was a widower, his wife, Nancy (Brown) Smith, having died in October of 1871.

In about 1885, the Smiths were joined at 303 Marlborough by their fourth child, Frank Gardner Smith, whose wife, Helen (Maralious) Johnson Smith, had died in April of 1884, Prior to her death, they lived at 49 Appleton.

Albert Smith and Frank Smith were associated with their father’s wholesale grocery firm. Dexter Smith was a poet, journalist, music critic, and composer. He was editor of the Musical Record in the 1890s and later was editor and publisher of Dexter Smith’s Musical Monthly. He composed numerous popular songs, the best known of which (according to his November 30, 1909, obituary in the Boston Globe) being “Put Me in My Little Bed.”

Lucy Ann Smith died in February of 1883. William Smith continued to live at 303 Marlborough with their children.

Lucy Maria Smith married in April of 1883 to George H. Wilson. By the 1890s, they lived in Quincy, where he was a grocer,

On October 17, 1893, 303 Marlborough was purchased from William D. Smith’s heirs by Charles Anthony Morss, Jr. He and his wife, Martha Houghton (Reed) Morss, lived at 6 Gloucester. He was affiliated with his father’s wire manufacturing firm, Morss & Whyte, and later would become treasurer of the successor firm, the Simplex Wire and Cable Company. 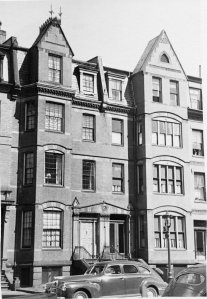 On January 2, 1894, 303 Marlborough was acquired from Charles Morss, Jr., by his brother, Everett Morss. He and his wife, Ethel (Reed) Morss, made it their home. They previously had lived in an apartment at the Hotel Royal at 295-297 Beacon.

Everett Morss also was affiliated with his father’s wire manufacturing firm, and later would become president of the Simplex Wire and Cable Company. He also would serve as serve as Treasurer of MIT.

Everett and Ethel Morss continued to live at 303 Marlborough during the 1908-1909 winter season, after which they moved to 115 Commonwealth.

On September 11, 1909, 303 Marlborough was purchased from Everett Morss by Alberta (Sturtevant) Binney, the wife of banker Henry Prentice Binney. They previously had lived at 30 Chestnut. They also maintained a home in Wareham.

Alberta Binney’s step-brother, Francis B. Todd, lived with them from about 1920 (and probably from the time he graduated from Harvard in 1918) until about 1926.  He was a wool merchant.

The Binneys continued to live at 303 Marlborough during the 1930-1931 season, after which they moved to Milton.

On March 6, 1941, 303 Marlborough was acquired from Henry Binney, Jr., by Louise Bowes, and on September 2, 1941, it was acquired from her by Kenneth Woodman, a gardener, and his wife, Elizabeth Helen (Fortune) Woodman.  They previously had lived at 50 Gloucester.   They operated 303 Marlborough as a lodging house, although it appears they did not change the legal occupancy from a single-family dwelling.  They continued to live and operate a lodging house there until about 1947.

On June 23, 1947, 303 Marlborough was purchased from the Woodmans by Miss Farmer’s School of Cookery to be its first dormitory, to be called Career House.  The transaction was reported in the Boston Globe on June 29, 1947.  In September of 1947, the school applied for (and subsequently received) permission to convert the house from a single-family dwelling into a dormitory.  Miss Farmer’s School continued to operate a dormitory at 303 Marlborough in 1949. 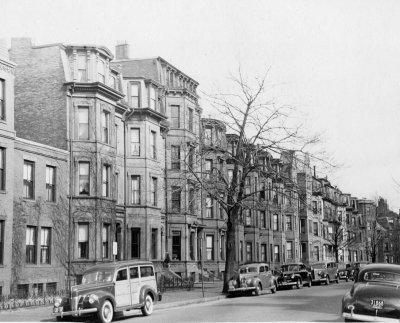 The house was shown as vacant in the 1950 City Directory.

On August 3, 1950, 303 Beacon was purchased from Miss Farmer’s School by Margaret L. Cassidy, a social worker, who operated it as a lodging house. She continued to live there until about 1962, when she moved to an apartment at 520 Beacon.

On May 2, 1962, 303 Marlborough was purchased from Margaret Cassidy by Estelle (Waldman) Charles, the wife of Edward Charles. They previously had lived at 106 Marlborough.

In June of 1962, Estelle Charles filed for (and subsequently received) permission to convert the house from a lodging house into a single-family dwelling.

Edward and Estelle Charles operated several lodging houses on West Newton Street and on St. Botolph Street. It appears, however, that they made 303 Marlborough their home and did not accept lodgers there.

Edward Charles died in April of 1987.  Estelle Charles continued to live at 303 Marlborough until her death in September of 2001.

The property changed hands in December of 2002. It remained a single-family dwelling in 2020. 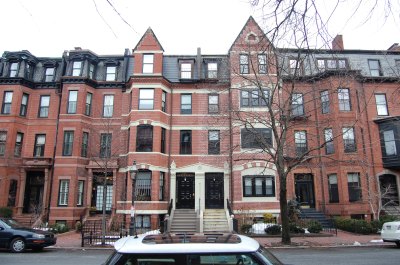