330 Dartmouth was designed by Blaikie and Blaikie, architects, and built in 1889-1890, for mason and builder Peter Graffam, one of three contiguous apartment buildings (330 Dartmouth, 259 Beacon, and 261 Beacon). He and his wife, Alice S. (Tufts) Graffam, lived in Malden.

259-261 Beacon were built first, completed in 1889, and known as The Grosvenor; 330 Dartmouth was completed in 1890 and known as The Graffam. Over the years, the three buildings changed hands frequently, sometimes being held by one owner and sometimes being held by different owners. All three were converted into condominiums: 330 Dartmouth in 1979, 259 Beacon in 1984, and 261 Beacon in 1983.

Peter Graffam purchased the land for all three buildings, with a 105 foot frontage on Beacon, on October 25, 1888, from dry goods merchant Eben Dyer Jordan, co-founder of the firm of Jordan, Marsh & Company, who had purchased it one week earlier, on October 19, 1888, from the Commonwealth of Massachusetts.  He and his wife, Julia M. (Clark) Jordan, lived at 46 Beacon.

Click here for an index to the deeds for 330 Dartmouth, and click here for further information about the land between the south side of Beacon and Alley 418, from Dartmouth to Exeter.

Peter Graffam sold all three buildings between 1889 and 1891. As built, there were open passageways between each building about 7 feet wide running from the alley north about 30 feet to an open courtyard about 11 feet wide and extending about 25 feet to the north. When the buildings were sold, the deeds established easements to ensure that these areas would remain open for the benefit of both properties.

In October of 1890, Peter Graffam advertised in the Boston Evening Transcript that The Graffam at 330 Dartmouth would be completed by November 1. He announced that the apartments would feature “an entirely new plan,” what later would be called a “duplex,” with the reception room, parlors, library, dining room, and kitchen on one floor and the bedrooms and bathroom on the floor above, connected by an interior stair.

On April 24, 1891, 330 Dartmouth was purchased from Peter Graffam by Samuel Little, president of the National Rockland Bank. He and his wife, Elizabeth (Malbon) Little, lived in Roxbury. 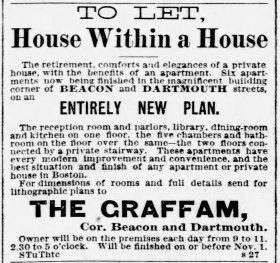 On April 30, 1900, both buildings were acquired from the Grosvenor trust by a trust established under the will of Frederick Lothrop Ames for the benefit of his daughter, Helen Angier (Ames) Hooper, the wife of Robert Chamblet Hooper. The Hoopers lived at 448 Beacon. In May of 1900, the trust also acquired 261 Beacon.

Helen (Ames) Hooper died in February of 1907, and on September 22, 1909, the properties were transferred to Philip Dexter as guardian for her only child, Helen A. Hooper, a minor.

On February 1, 1913, 330 Dartmouth, 259 Beacon, and 261 Beacon were purchased from Loren D. Towle by the Methodist Religious Society, which continued to own them until January of 1923.

The properties changed hands and in May of 1924 were sold to three separate owners. They all changed hands again, and by December of 1924 were all owned by real estate dealer George F. Welch. On December 10, 1926, they were acquired from him by real estate dealer William J. Stober, who sold 259 Beacon and 261 Beacon that same month, and retained 330 Dartmouth. It remained under separate ownership from that time.

By the 1920s, 330 Dartmouth had become a combination of medical offices and apartments.

The Institution for Savings in Roxbury continued to own 330 Dartmouth until 1945. The property then changed hands and the use migrated from offices back to apartments.

On January 5, 1965, 330 Dartmouth was purchased by Jack Eadie Molesworth. He was a philatelic dealer specializing in Confederate stamps. A leader of the ultra-conservative Young Americans for Freedom and a Republican State Committee member, he was an unsuccessful candidate for Congress in 1964. He and his wife, Phyllis (Carpinteri) Molesworth, lived in an apartment at 88 Beacon.

On April 4, 1979, 330 Dartmouth was acquired from Jack Molesworth by John V. O’Neil, trustee of the 330 Dartmouth Street Realty Trust.

In May of 1979, John O’Neil applied for (and subsequently received) permission to remodel the three medical units and convert the property into seventeen apartments.

On August 6, 1979, he converted the property into seventeen condominium units, the 330 Dartmouth Street Condominium.