255 Beacon was designed by Saul Moffie, architect, and built in 1939 as a five story (plus basement), 24-unit apartment building, for the Druss Construction and Supply Company. It replaced two townhouses at 253 and 255 Beacon which the company purchased on August 26, 1939, from Anna (Palfrey) Allan, the widow of Bryce J. Allan. Druss Construction is shown as the owner on the original permit application for the new building, dated August 31, 1939.

Click here for an index to the deeds for 255 Beacon and its predecessor buildings, and click here for further information about the land between the south side of Beacon and Alley 419, from Clarendon to Dartmouth.

In 1941, Druss Construction declared bankruptcy and on October 31, 1942, 255 Beacon was acquired from David S. Kunian, the trustee in bankruptcy, by Marian H. McDermott.

On the same day, he converted the property into 24 condominium units, the 255 Beacon Condominium. 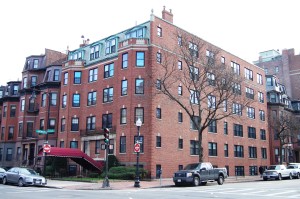 On January 11, 1869, 253 Beacon was purchased from Henry Whitwell by attorney Charles Bishop Goodrich. He and his wife, Harriet Newell (Shattuck) Goodrich, made it their home. They previously had lived at 9 Beacon.

On October 8, 1878, Harriet Goodrich, as executor of her husband’s estate, offered 253 Beacon for sale at public auction by Leonard & Co., auctioneers.  On October 10, 1878, the Boston Post reported that “no suitable offer was made for it,” and it was withdrawn from sale.

On October 22, 1878, the Boylston Mutual Insurance Company foreclosed on its mortgage to Charles Goodrich and took possession of 253 Beacon.

By the 1879-1880 winter season, it was the home of Sidney Williams Burgess and his wife, Alice Brastow (Thayer) Burgess. They had married in January of 1879 and 255 Beacon probably was their first home together. He was a shipping and insurance broker. They continued to live at 253 Beacon during the 1881-1882 season, but moved thereafter to 189 Beacon.

By the 1883-1884 winter season, 253 Beacon was the home of insurance executive George Lewis DeBlois, Jr. and his wife Amanda Malvina (Fuller) DeBlois. They previously had lived at 292 Marlborough. They first leased 253 Beacon from the Boylston Mutual Insurance Company, but on June 29, 1887, Amanda DeBlois purchased it from them.

On January 28, 1899, 253 Beacon was acquired from Amanda DeBlois’s heirs by Anna (Palfrey) Allan, the wife of Bryce J. Allan, who combined it with their home at 255 Beacon.

255 Beacon was designed by architects Emerson and Fehmer and built in 1871-1872 for  Charles William Galloupe and his wife, Sarah Augusta (Kittredge) Galloupe.  In 1870, they had lived at 23 Beacon.  They also maintained a home, Strodehurst, on Galloupe’s Point, in Swampscott.

Charles Galloupe acquired the land for 255 Beacon from the Commonwealth of Massachusetts in two transactions: on February 2, 1866, he acquired the lot at the corner of Dartmouth with a 30 foot frontage on Beacon, and on April 27, 1867, he acquired a three foot wide lot to the east.

Charles Galloupe was a retired wholesale clothing merchant and banker.  During the 1870s, he was one of three members of the executive building committee that oversaw construction of Trinity Church in Copley Square.

By 1872, the Galloupes had been joined at 255 Beacon by their son-in-law and daughter, Ellis and Sarah Morton.  In 1871, they had lived at 17 Beacon.  Ellis Wesley Morton was an attorney.  He was former US Attorney for Massachusetts and had served as a member of the Massachusetts House of Representatives and the Massachusetts Senate.

Ellis Morton died in September of 1874.  The Galloupes and their widowed daughter, Sarah, continued to live at 255 Beacon until about 1878.

By the 1878-1879 winter season, 255 Beacon was the home of E. F. Bowditch, probably Ebenezer Francis Bowditch and his wife, Elizabeth Fessenden (Perry) Bowditch.  Their primary residence was at Millwood Farm in Framingham.  They continued to live at 255 Beacon during the 1879-1880 season.

On February 10, 1880, 255 Beacon was acquired from Charles Galloupe by Louisa C. (Bartlett) Palfrey, the wife of Francis Winthrop Palfrey. They previously had lived at 202 Beacon. They also maintained a home in Beverly.

Francis Palfrey was an attorney and registrar in bankruptcy.  He had served in the Civil War and was injured at Antietam, and was brevetted a Brigadier General in 1865.  He founded the Military Historical Society of Massachusetts and wrote a book on the Antietam and Fredericksburg campaigns.

The Palfreys’ three daughters – Marian, Anna, and Louisa – lived with them.

Marian Palfrey married in November of 1887 to Edward Preble Motley, a banker. After their marriage, they lived briefly with her parents at 255 Beacon and then purchased and moved to 202 Beacon, where Francis and Lousia Palfrey had lived before purchasing 255 Beacon.

Francis Palfrey died in December of 1889 in Cannes, France, where the Palfreys had traveled for the winter season. Louisa (Bartlett) Palfrey continued to live at 255 Beacon with their daughters, Anna and Louisa.

Louisa (Bartlett),Palfrey died in January of 1897.

On February 6, 1897, 255 Beacon was acquired from Louise Palfey’s estate by Anna (Palfrey) Allan, and she and Bryce Allan moved there from 231 Beacon.

In January of 1899, Anna Allan acquired 253 Beacon. The Allans combined the two houses as their residence, retaining the firm of Little and Browne for the remodeling.   Architectural historian Stuart A. Drake, in his article on Little and Browne, “Settings for Plutocrats” (Historic New England, Spring 2014) indicates that they “created at No. 253 a two-story, white-and-gold-paneled, mirrored ballroom with a trellised conservatory and musician’s gallery at one end.”

Bryce Allan died in August of 1924.  Anna Allan continued to live at 255 Beacon until about 1933.  She maintained her home in Beverly Cove, and in the 1930s spent winters in Washington DC.

On August 26, 1939, 253-255 Beacon were acquired from Anna Allan by the Druss Construction and Supply Company. It razed both houses soon thereafter.