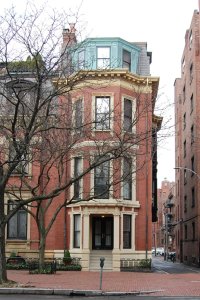 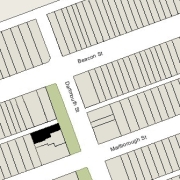 328 Dartmouth was designed by architects Snell and Gregerson and built in 1871-1872, one of three houses – 163 Marlborough and 326-328 Dartmouth — built at the same time, creating a symmetrical composition on Dartmouth.

In his Houses of Boston’s Back Bay, Bainbridge Bunting comments that the houses are “three closely related structures” that “fit together to create an impressive whole.”  326 Dartmouth forms the center house of the three, half a story lower than the houses on either side and differentiated by changes in floor level and stone trim. 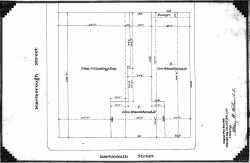 Click here for an index to the deeds for 328 Dartmouth, and click here for further information about the land between the north side of Marlborough and Alley 418, from Dartmouth to Exeter.

326-328 Dartmouth were built by Standish & Woodbury, masons and builders.  In early August of 1871, they filed a Notice of Intention to Build for the two houses on behalf of George Wheatland, Jr. (reported in the Boston Evening Transcript on August 8, 1871).  Construction probably started soon thereafter.

The successful bidder at the auction probably was Dr. William Thornton, a physician, who took title to the property from George Wheatland, Jr., on October 30, 1874. He and his wife, Sarah (Gamble) Thornton, made it their home, and he also maintained his medical office there. They previously had lived at 626 Tremont. 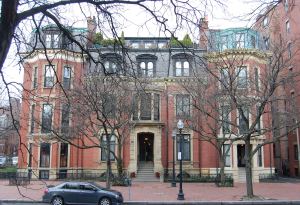 On April 22, 1885, 328 Dartmouth was purchased from William Thornton by Joshua Gardner Beals. He and his wife, Edith (Simmons) Beals, made it their home. They previously had lived at 419 Beacon.

Joshua Beals had been an owner of the Boston Post newspaper, founded by his father, William Beals, and Charles G. Greene.  He sold his interest in the paper in 1875.

Gertrude Beals, an artist, married in June of 1904 to Frank A. Bourne, an architect.  After their marriage, they lived at 130 Mt. Vernon.

Gardner Beals, an attorney and real estate dealer, married in June of 1913 to Elizabeth Grant Ludlam.  After their marriage, they lived in an apartment at 138 Marlborough.

Joshua Beals died in July of 1914.  Edith Beals continued to live at 328 Dartmouth with their son, Sidney.  It remained their home during the 1915-1916 winter season, but they moved thereafter to 41 Marlborough.

On August 1, 1916, 328 Dartmouth was purchased from Edith Beals by Georgia (Pope) Sawyer, the wife of Henry Buckland Sawyer. They previously had lived in Brookline. They also maintained a home in Beverly Cove.

Henry Sawyer was an engineer.  He retired in 1931 as vice president of the engineering firm of Stone and Webster. 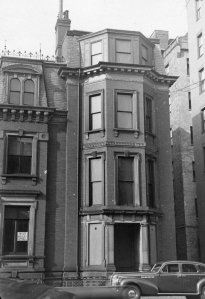 On October 22, 1944, 328 Dartmouth was acquired from Georgia Sawyer by the Massachusetts School of Physiotherapy, located at 240 Beacon (which it had acquired earlier that year). In November of 1944, it applied for permission to convert 328 Dartmouth from a single-family residence into a dormitory.  The application was denied, and the School’s appeal was dismissed.  However, in March of 1945, the Building Department issued the permit.

On March 22, 1946, 328 Dartmouth was acquired from the Massachusetts School of Physiotherapy by the Notre Dame Training School. It became the convent of the Boston Province of the Sisters of Notre Dame de Namur, to whom the training school transferred the property on September 3, 1974.

The convent remained at 328 Dartmouth until about 1982.

On August 30, 1983, 328 Dartmouth was acquired from the Sisters of Notre Dame de Namur by Jeffery J. Jarvis, trustee of the 328 Dartmouth Realty Trust. In October of 1983, he applied for (and subsequently received) permission to convert the property from a dormitory into five apartments. In January of 1984, he modified his plans to increase the number of units to twelve.

On May 21, 1984, he converted the property into twelve condominium units, the 328 Dartmouth Street Condominium. 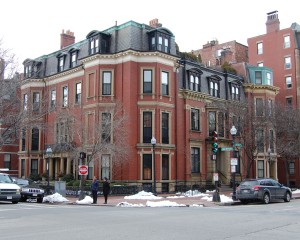