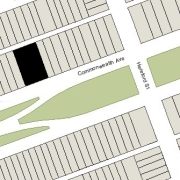 Henry Squarebriggs Mackay (McKay) of Mackay and Dunham purchased the land for 333 Commonwealth on February 13, 1895, from Ellen A. (Larrabee) Johnson, the wife of Henry M. Johnson. She had purchased it in two lots on November 19, 1890, the western 50 feet from Mary (Mason) Stockton, the wife of Howard Stockton, and the eastern 30 feet from Hasket Derby. The lots were part of a tract of land originally purchased from the Boston Water Power Company on March 1, 1872, by a consortium of Grenville Temple Winthrop Braman (former treasurer of the Boston Water Power Company), Henry D. Hyde, and Frank William Andrews.

In November of 1895, Henry S. Mackay bought the land for 270 Commonwealth, also from Ellen Johnson.

On August 3, 1895, the Boston Globe described the new hotel at 333 Commonwealth as a “six-story steel and terra cotta structure, containing 30 suites, with a front of Indiana limestone, and granite foundations. It has every modern improvement, the suites being non-housekeeping, there being a handsome café on the first floor.” 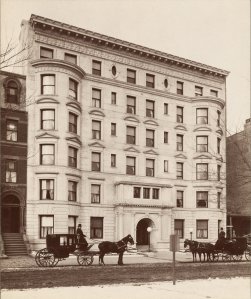 By the 1896-1897 winter season, the first residents had made 333 Commonwealth their home, among them Henry S. Mackay and his wife, Robena (Robina/Ruby) (Mackay) Mackay. They previously had lived in an apartment at The Ericson at 373 Commonwealth, also designed by Mackay and Dunham.

To finance the Empire and the Tuileries, Henry Mackay had entered into multiple mortgages on both properties, including mortgages with Ellen Johnson when he purchased the land, several additional mortgages on each building, and a blanket mortgage covering both buildings with Mead, Mason & Co., the builders.

Ellen Johnson died in November of 1898, and on December 22, 1898, Henry Johnson foreclosed on her mortgages to Henry S. Mackay on both properties. He was quoted in a March 27, 1899, article in the Barre (Vertmont) Telegram as saying “’The property is simple [sic] covered up with attachments, and it was to clear up the title that foreclosure proceedings have been brought.  I never saw such a muddle in my life.’”

In early February of 1899, Henry Mackay and his family left Boston for the west, where they were mentioned as staying in a hotel in Salt Lake City in the February 10, 1899, edition of the Salt Lake Tribune.  According the Barre (Vermont) Telegram article, they had gone west “to make, as it was understood, a temporary visit to his gold mine in the West.  He has not been heard from since.”

Henry Mackay was declared bankrupt in April of 1899. He and his family remained in the west and he became a mine engineer, promoter, and investor, with interests in the southwest and Mexico.

333 Commonwealth was sold at auction on March 31,1899. The property was acquired by Frederick (Fred) Wellington Ayer, a lumber dealer and paper and pulp manufacturer from Bangor, Maine. His wife, Marietta Rollins (Mann) Ayer, was Ellen Johnson’s niece, and he was acting for the Johnson family.

270 Commonwealth was sold at auction on April 26, 1899. In May of 1896, Ellen Johnson had assigned the mortgage to Ellen Louise (Tileston) Hemenway, the widow of Charles Porter Hemenway. She was the successful bidder and took possession of the property.

Henry Johnson died in September of 1900. In his will, he left one fourth of his estate to each of his wife’s three nieces: Marietta Rollins (Mann) Ayer (daughter of Jonathan Mann and Harriett Louise (Larrabee) Mann), wife of Fred W. Ayer, of Bangor; Ella Frances (Mann) Guild, wife of Charles H. Guild, of Bangor; and Ellen (Nellie) A. (Strickland) Goodnow (daughter of Philo Augustus Strickland and Mary Elizabeth (Larrabee) Strickland), wife of Walter Richardson Goodnow, of 293 Commonwealth (and formerly of 47 Hereford). The remaining fourth he left in trust to his nephew, George F. Johnson of Lynn, son of his brother, Samuel H. Johnson and Mary Ann (Burchsted) Johnson.

From 1904, the Hotel Empire and the Hotel Tuileries were managed by the firm of Ainslee & Grabow (later the E. R. Grabow Company), which also managed the New Ocean House in Swampscott and several other properties. The firm announced its management of the two hotels in the September 3, 1904, edition of its New Ocean House Reminder, indicating that “under the new management both houses will be thoroughly renovated and made ready for occupancy on September twenty-fifth, the American plan will be continued, and those who desire a select, retired city home for the winter season will find their wants here satisfied.”

On May 25, 1920, the Boston Globe reported that 333 Commonwealth and 270 Commonwealth had been sold to a “purchasing syndicate” that intended to make “extensive improvements.” The article also reported that “after the present leases have expired,” E. R. Grabow Company would cease management of the properties and they would be managed by Fannie L. Randall.

On August 26, 1920, 333 Commonwealth and 270 Commonwealth were acquired from the heirs of Henry Johnson by Fannie L. Randall, probably acting on behalf of the investment syndicate mentioned in the Globe article. Fannie L. (Whitney) Giles Randall was the widow of Charles W. Randall. After acquiring the properties, she lived at 333 Commonwealth. She previously had lived in Brookline.

On June 15, 1922, the Boston Globe reported on the sale (indicating that the buyer was the Commonwealth Building Company, Inc.). It described 333 Commonwealth as “27 apartments and the usual public rooms of a first-class hotel.” It noted that “title is given by Mrs. Fanny L. Randall who will continue the management for the new owners as a hotel as in the past.”

On April 16, 1923, 270 Commonwealth and 353 Commonwealth – both of which had been converted into medical offices — were re-acquired by the Professional Building Co. The Commonwealth Home and Office Trust retained 333 Commonwealth, which continued to be operated as a hotel.

In 1923 and 1924, real estate dealer Stanley Williams Lovejoy (who had owned 353 Commonwealth in 1921) was listed in the City Directories as “proprietor” of 333 Commonwealth. He and his wife, Helen Marcia (Jaques) Lovejoy, lived in Winchester. Fannie Randall continued to live at 333 Commonwealth and manage the hotel until her death in September of 1929.

On August 21, 1934, the Boston Globe reported that Emile F. Coulon, managing director of the Touraine, Westminster, and Victoria hotels, would renovate 333 Commonwealth “from basement to roof” and transform it “into a typical French hotel, to be known as the Lafayette” which would be “the only hotel in the United States strictly French in its operation.” The Globe article described the remodeling plans in some detail:

“The main dining room will have a fresco ceiling, which will be paneled and ribbed with a delicate shade of turquoise blue, combined with gold and snow white. It depicts the color scheme of the Louis XIV period. Large French windows will carry heavy French hangings to harmonize with the general architecture of the period. At either end of this salon will be large fireplaces.

“On the second floor various rooms will be laid out for banquet and small group dinner parties. Atop the hotel will be erected four penthouses of three and four rooms each, equipped with every modern convenience.”

On September 6, 1934, the City Institution for Savings of Lowell foreclosed on its mortgage to the Professional Building Co. (the mortgage having been assumed by the Commonwealth Home and Office Trust) and took possession of 333 Commonwealth, and on November 10, 1934, it sold the building to Hotel Lafayette, Inc., of which Emile Coulon was president.

The Restaurant Lafayette opened on January 1, 1935, with a civic dinner including Governor-elect James Curley. By 1940, it was known as Maison Lafayette.

Advertisement for the Hotel Lafayette; Boston’s Back Bay, published by the Back Bay Association, 1941

On September 7, 1939, the City Institution for Savings foreclosed on its mortgage to Hotel Lafayette, Inc., and transferred the property to a reorganized corporation, Maison Lafayette, Inc., of which Joseph D. Hopkins was president and treasurer. He previously had been manager of the Hotel Abbotsford. On April 14, 1940, the Boston Globe reported that Joseph Hopkins had introduced “an innovation in Boston hotels.” “Recognizing the interests of Bostonians in foreign foods, Mr. Hopkins is featuring ‘Guest Chefs’ of the nations from all parts of the world, including France, Belgium, Switzerland, China, India and Egypt.”

On April 30, 1947, the Boston Globe announced that the Hotel Lafayette would be operated by Edward Bryce Bell, “who leaves his position as president and managing director of the Somerset Hotel.”

333 Commonwealth remained the Hotel Lafayette until about 1952.

On November 7, 1952, the Boston Globe reported that the Catholic Archdiocese of Boston had acquired 333 Commonwealth for a home for elderly women. On March 3, 1953, The Lafayette Corp. transferred the property to the Archdiocese, and on June 9, 1953, it transferred the property to the Carmelite Sisters for the Aged and Infirm. The home, known as St. Patrick’s Manor, remained at 333 Commonwealth until 1968, when it moved to a new, larger property in Framingham.

On June 18, 1969, Edward M. Levitt and his wife, Arlene (Cherniak) Levitt, trustees of the Gardner Realty Trust, acquired 333 Commonwealth from the Carmelite Sisters for the Aged and Infirm.

They continued to operate the property as a nursing home, the Gardner Pierce House, until 1979.