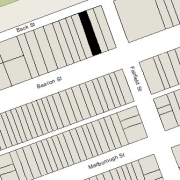 338 Beacon is located on north side of Beacon, between Fairfield and Gloucester, with 336 Beacon to the east and 340 Beacon to the west.

338 Beacon was designed by George F. Meacham, architect, and built in 1877-1878 by James W. Tobey, builder, for Edwin Morey and his wife, Caroline A. (Cooper) Morey, on land purchased by Caroline Morey on September 28, 1878, from the Boston and Roxbury Mill Corporation. Edwin Morey is shown as the owner on the final inspection, dated November 7, 1878. The property was numbered 336 Beacon until about 1889.

Click here for an index to the deeds for 338 Beacon, and click here for further information on the land on the north side of Beacon, including the Storrow Memorial Embankment on the Esplanade.

The Moreys previously had lived at 1666 Washington. They also maintained homes in Marblehead and, from about 1893, at Allerton Cottage in Castine, Maine.

Edwin Morey was a commission merchant and dealer in papermakers’ supplies.  From 1885 to 1891, he also served as president of the Boston and Lowell Railroad.

Caroline Morey died in June of 1901.  Edwin Morey remarried in September of 1902 to Adda Louise (Richmond) Mathews, widow of Frank Bowdoin Mathews.  After their marriage, they lived at 338 Beacon and in Castine, Maine.

Edwin Morey died in September of 1907. Adda Morey continued to live at 338 Beacon in 1908, and then moved to Brookline.

On February 25, 1909, 338 Beacon was purchased from Edwin Morey’s estate by William Payne Blake, an attorney, and his sister, Anne Dehon Blake, an artist. They previously had lived at 265 Beacon.

They continued to live at 338 Beacon during the 1915-1916 winter season but were living elsewhere during the next season.

During the 1916-1917 winter season, 338 Beacon was the home of Paul Drummond Rust and his wife, Florence R. (Stuart) Rust.  They had lived at 26 Marlborough during the previous season.  Paul Rust was an investor in timber lands, wholesale lumber dealer, and investment banker and broker.  By the 1917-1918 winter season, they had moved to 135 Beacon.

William and Anne Blake resumed living at 336 Beacon, and were living there at the time of her death in October of 1917.  William Blake moved soon thereafter.

By the 1919-1920 winter season, 338 Beacon was the home of Hendricks Hallett Whitman and his wife, Adelaide Chatfield (Taylor) Whitman.  They had lived at 229 Marlborough during the previous season.  They also maintained a home in Beverly.  He was a textile manufacturer and wholesale dry goods merchant in his father’s firm.  By 1921, they had moved to 18 Chestnut, and by the 1921-1922 winter season, they were living at 145 Beacon.

By the 1920-1921 winter season, 338 Beacon was the home of retired paper manufacturer George Thomas Keyes and his wife, Emily Brown (Eaton) Keyes. During the previous season, they lived at 22 Fenway and before that at 390 Beacon. They also maintained a home in East Pepperell, Massachusetts.

William P. Blake died in March of 1922, The March 8, 1922, Boston Globe article on his death noted that he “either fell or jumped from a window on the fifth floor of the Hotel Wadsworth” at Newbury and Kenmore Streets “where he lived alone…”.

On April 9, 1941, 338 Beacon was purchased from Emily Keyes by real estate dealer Henry Joseph O’Meara, and on April 10, 1941, it was acquired from him by Eleanor (Helen/Nellie) Annie (Deary/Deery) Pleau Litch, the widow of Eulderic Pleau and of Lemuel W. Litch. She lived in West Bath, Maine.

In June of 1941, Eleanor Litch applied for (and subsequently received) permission to convert the property from a single-family dwelling into a lodging house.

On July 20, 1941, Eleanor Litch transferred 338 Beacon to her brother, James J. Deery, who was sexton of Holy Cross Cathedral. He and his wife, Bridget Agnes (called Agnes) (Kelly) Deery, made it their home and operated it as a lodging house. They previously had lived in Jamaica Plain.

On February 10, 1949, James Deery transferred 338 Beacon to himself and his daughter, Kathleen A. Deery. Later that year, she married to Michael A. Murphy.

On May 26, 1950, 338 Beacon was acquired from James Deery and Kathleen (Deery) Murphy by Flora (Durland) Josselyn, the widow of Royce Brewster Josselyn. She lived in Hampton, New Hampshire.

James and Agnes Deery moved thereafter; he died in October of 1950 in New London, Connecticut.

The property changed hands and on December 26, 1950, 338 Beacon was acquired by Louis Ferrari and his wife, Mary Madeline (Moriarty) Ferrari. He was treasurer of the Moose Head Tavern at 473 Stuart.

In January of 1951, he applied for (and subsequently received) permission to convert the property from a lodging house into seven apartments.  In May of 1951, he amended  the application to increase the number of units from seven to nine.

After the building was remodeled, Louis and Mary Ferrari lived in one of the apartments.   They previously had lived in West Roxbury. They continued to live at 338 Beacon in 1953, but had moved to 275 Marlborough by 1954.

On January 31, 1956, 338 Beacon was acquired from the Ferraris by Eric Friberg. He and his wife, Elsie Marie (Soquist) Friberg, lived in Sharon. On April 18, 1960, he transferred the property into his and his wife’s names. By then, they were residents of Boca Raton, Florida, where Eric Friberg died in September of 1963.

On June 30, 1980, 334-338 Beacon Street Associates converted the property into 33 condominium units, the Beacon on the Charles Condominium, with fourteen units at 334 Beacon (thirteen in the main building and one “carriage house” unit in the ell at the rear), ten units at 336 Beacon, and nine units at 338 Beacon.

In September of 1992, the Beacon on the Charles Condominium Association filed for (and subsequently received) permission to consolidate 334 Beacon and 336 Beacon into one property.  338 Beacon, while part of the same condominium development, remained a separate property.