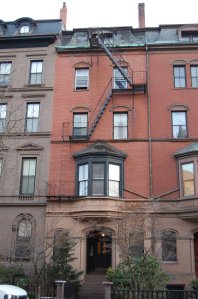 135 Beacon is located on the south side of Beacon, between Arlington and Berkeley, with 133 Beacon to the east and 137 Beacon to the west.

135 Beacon was built as the home of Samuel Hammond Russell and his wife, Louisa Ann (Adams) Russell. They previously had lived at 99 Boylston. They also maintained a home in Nahant (which was destroyed by fire on May 18, 1896). 137 Beacon was built for his aunt, Catherine (Hammond) Gibson.

Samuel Russell and Catherine Gibson purchased the land for 135 Beacon and 137 Beacon on September 1, 1859, from William Warren Goddard and T. Bigelow Lawrence. It was part of a larger tract they had purchased from the Commonwealth of Massachusetts on August 1, 1857.

Click here for in index to the deeds for 135 Beacon, and click here for further information about the land on the south side of Beacon from Arlington to Berkeley, north of Alley 421.

On November 11, 1859, the Boston Traveller reported that Samuel Hammond and Catherine Gibson had each filed notices of their intention to build houses on Beacon Street. On May 25, 1860, the Boston Evening Transcript reported that the houses were “nearly roofed in.” On July 31, 1860, the Transcript commented in more detail that “Mr. E. C. Cabot has two houses under his direction, which will be situated on the south side of Beacon below Arlington street. The dwellings are to be built for S. H. Russell, Esq., and Mrs. C. Gibson, and will be 22 feet by 58 feet in dimensions, and four stories high. The fronts will be of freestone to the second story, with face brick and freestone above.”

On September 3, 1860, Samuel Russell and Charles Gibson (Catherine Gibson’s son) joined with land owners and builders of the houses under construction at 131-133 Beacon and 139-147 Beacon in a petition to the Board of Aldermen seeking permission to remove “the very objectionable Poplar trees in front of their premises.”  The petition was granted by the Board.

After 135 Beacon was built, it extended slightly onto the lot to the east, still owned by William Goddard and T. Bigelow Lawrence, and on November 21, 1860, they sold a strip of land 8/100ths of a foot wide to S. Hammond Russell to reflect the actual width of the lot.

A former merchant, S. Hammond Russell was a trustee of estates and also served as treasurer of the Bunker Hill Monument Association.

135 Beacon was inherited by the Russells’ daughters, Edith (Russell) Playfair Crooks and Alice (Russell) Fitzgerald, both residents of England. Edith Russell had married in October of 1878 to Sir Lyon Playfair, a professor of chemistry and Liberal Party leader who was named Baron Playfair in 1892. He had died in May of 1898 and she remarried in 1901 to R. Fleming Crooks.  Alice Russell had married in October of 1900 to James R. Fitzgerald, a retired officer in the British civil service in India.

On September 11, 1903, 135 Beacon was purchased from Edith Crooks and Alice Fitzgerald by Georgianna West (Graves) Perry, the widow of merchant Charles French Perry, a shipping merchant in the South American trade. She previously had lived at 141 Newbury. She also maintained a home in Newburyport.

Elizabeth Perry married in October of 1906 to Henry Hyslop Richardson, a real estate dealer.  After their marriage, they lived in Brookline with his mother, Julia Gorham (Hayden) Richardson, the widow of architect Henry Hobson Richardson.

William Graves Perry married in August of 1908 to Eleanor Gray Bodine.  He was an architect and, soon after their marriage, they moved to Paris, where he studied at the Ecole des Beaux Arts.  They returned to Boston in 1913 and lived at 135 Beacon with his mother. In 1914, he purchased a 55 acre farm in Medfield, including a colonial house which he restored. He later would be largely responsible for the restoration of Colonial Williamsburg.

Gardner Perry was a stockbroker and banker. He continued to live at 135 Beacon until January of 1912, when he traveled to South America and Europe, returning in September of 1913.  In January of 1914, he moved to Albany, New York.

Edward Hale Perry attended Harvard with the Class of 1909, but withdrew to become a mining engineer.

Georgianna Perry, William and Eleanor Perry, and Edward Hale Perry continued to live at 135 Beacon during the 1915-1916 winter season. In the fall of 1916, they moved to William Perry’s home in Medfield, where they remained for the next three winter seasons. William and Edward Perry both enlisted to serve in the US Army in 1917; Edward Perry was killed in action in March of 1918.

During the 1916-1917 winter season, 135 Beacon was the home of attorney Frederic Sprague Goodwin and his wife Juliet Borland (Higginson) Goodwin. They had married in September of 1916 and 135 Beacon was their first home together. Prior to their marriage, he had lived at 301 Beacon and she had lived at her home, Mill Farm, in Dover, Massachusetts, which they continued to own as a second residence. She was the daughter of Francis Lee Higginson and his first wife, Julia (Borland) Higginson, and also lived with him and his second wife, Corina (Shattuck) Higginson, at 274 Beacon and in Pride’s Crossing.

During the 1917-1918 winter season, 135 Beacon was the home of Paul Drummond Rust and his wife, Florence R. (Stuart) Rust.  They had lived at 338 Beacon during the previous season.  Paul Rust was an investor in timber lands, wholesale lumber dealer, and investment banker and broker. They moved soon thereafter to 353 Commonwealth.

By the 1919-1920 winter season, 135 Beacon was once again the home of Georgianna Perry and William and Eleanor Perry. They continued to live there during the 1920-1921 season, but moved thereafter to Brookline.

Euphemia McClintock had served as president of the College for Women in Columbia, South Carolina, until it  merged with Chicora College in 1915.  She moved to Boston and, by 1920, was living at 129 Beacon.  She probably first was a teacher in her sister’s school, but by late 1923 had established her own institution, Erskine School, at 115 Beacon.

Euphemia McClintock continued to serve as director of Erskine School until about 1939, and to live at 129 Beacon until about 1940.

135 Beacon remained an Erskine School dormitory until about 1951.

On September 15, 1950, 135 Beacon was acquired by real estate dealer Thomas J. Diab.  In February of 1951, he filed for (and subsequently received) permission to convert it from a single-family dwelling (it apparently had never been formally zoned as a school or dormitory) into nine apartments.

On October 31, 1951, the property was acquired by Thomas Diab’s real estate company, Baid Realty Corp. (Baid being the reverse spelling of Diab).

On January 9, 1952, 135 Beacon was acquired by Miss Irene Louise Pitz, a nurse. She lived in one of the apartments.

On April 30, 1984, 135 Beacon was purchased from Irene Pitz by Jerome L. Missel and Margaret M. Huddleston. In November of 1984, they converted the property into ten condominiums. Three years later, in May of 1987, Jerome Missel filed for (and subsequently received) permission to increase the legal occupancy from nine units to ten units, conforming with the existing number of condominiums.

On June 25, 2009, the Perroncellos removed the condominium status of the building, re-establishing it as an apartment house.

The property subsequently changed hands. It remained an apartment house in 2020.