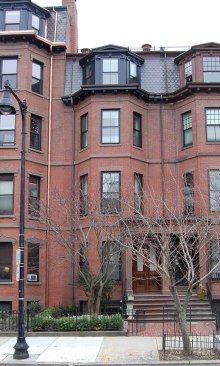 381 Beacon is located on the south side of Beacon, between Fairfield and Gloucester, with 379 Beacon to the east and 383 Beacon to the west.

The ten houses were built for speculative sale by a consortium of Frederick Pope, who was both an architect and a builder, and George Martin Gibson, a builder and contractor. They shared the same business address at 81 Washington in 1870.

The land for 387 Beacon was owned by real estate investor Charles Uriah Cotting, and the land for 393-395 Beacon was owned by dry goods merchant Eben Dyer Jordan, co-founder of the firm of Jordan, Marsh & Co. In these three cases, the houses were constructed by Frederick Pope and George Gibson under agreements with the land owners, who then sold the houses after they were built.

The land for all ten houses originally had been part of a parcel purchased from the Boston Water Power Company on January 29, 1866, by a real estate investment trust formed by John Templeman Coolidge, Franklin Evans, and Charles Henry Parker. The trust subsequently subdivided the property into lots, which it sold to investors and builders, who then frequently resold the lots to others.

Click here for an index to the deeds for 381 Beacon, and click here for further information about the land between the south side of Beacon and Alley 416, from Fairfield to Gloucester.

On September 15, 1869, 381 Beacon was purchased from George Gibson by Ruth G. (Wormstead) Thayer, the wife of William Davis Thayer. They previously had lived at 17 Beacon. They also maintained a home in the Longwood district of Brookline.

A former merchant, William Thayer was an insurance broker.

On March 25, 1874, 381 Beacon was acquired from Ruth Thayer by Charles Edward Powers, an attorney and president of the Middlesex Railroad. He and his wife, Harriet Ellen (Fessenden) Powers, lived at the Tremont House hotel.

On October 13, 1877, Ruth Thayer acquired 381 Beacon back from Charles Powers. The house was shown as vacant in the 1878 Blue Book, but was once again the Thayers’ home by the 1878-1879 winter season. They continued to live there during the 1881-1882 season, but moved thereafter to the Hotel Bristol (northwest corner Clarendon and Boylston).

On August 31, 1882, 381 Beacon was acquired from Ruth Thayer by real estate broker Chase Langmaid. He and his wife, Dorcas (Cutler) Langmaid, made it their home. They previously had lived in Watertown.

The Langmaids’ son-in-law and daughter, Charles Kenny and Helen (Langmaid) Kenny, lived with them.  They had married in March of 1882, and 381 Beacon probably was their first home together.

Charles Kenny was owner of a hack and livery stable at 22 Charles Street and also later the Charlesgate Stables at 100 Massachusetts Avenue, at the northeast corner of Newbury.  In the 1890s, he served as assistant quartermaster general, with the rank of Colonel, on the staff of Governor Frederic Greenhalge.

By the 1883-1884 winter season, the Kennys had purchased a home at 213 Beacon and the Langmaids had moved there with them.

On October 10, 1883, 381 Beacon was purchased from Chase Langmaid by Annie Coffin (Upton) Hayward, the wife of Dr. George Hayward, a physician. In 1880, they had lived in Jamaica Plain.

Annie Hayward died in December of 1883. In her will, she left 381 Beacon to her husband, in trust for his benefit and the benefit of their children.

George Hayward continued to live at 381 Beacon until his death in March of 1901.

On June 11, 1901, 381 Beacon was acquired from the trust established under Annie Hayward’s will by Marion F. Otis, the wife of Dr. Edward Osgood Otis. They previously had lived at The Imperial at 308 Commonwealth. They also maintained a home in Cohasset.

Edward Otis was a physician specializing in lung diseases and a professor at Tufts Medical School.

On January 15, 1926, 381 Beacon was purchased from Marion Otis by Johnson O’Connor. He previously had lived in an apartment at 497 Beacon.

Johnson O’Connor pioneered the use of aptitude testing. In 1939, he founded the Human Engineering Laboratory, located at 347 Beacon and eventually with offices nation-wide.

He was a widower. He remarried in 1931 to Eleanor Manning, an architect and a leader in public housing and urban planning.  After their marriage, they lived at 381 Beacon.

The O’Connors continued to live at 381 Beacon until their deaths, both in July of 1973. 381 Beacon was inherited by Johnson O’Connor’s company, the Human Engineering Laboratory.

On August 17, 1983, 381 Beacon was purchased from the Human Engineering Laboratory by John S. Cook and his wife, Elisabeth E. Cook.  On December 20, 1995, they transferred the property into John Cook’s name.

On December 12, 2006, the property was purchased from William Hassett by Serene Srouji, trustee of the 381 Beacon Street Realty Trust.

The property subsequently changed hands.  It continued to be assessed a single-family dwelling in 2020.