The block on the south side of Beacon between Fairfield and Gloucester is 500 feet in length and 112 feet from Beacon to Alley 416.

The company sold all of its land in large parcels, almost exclusively to real estate investment trusts which then subdivided the land and resold it. It sold land in 1863, 1866, 1868, and 1872, by which point it had sold all of its land between the Commonwealth’s lands and a line 125 feet west of Massachusetts Avenue (West Chester Park). It sold the remainder of its land in the residential portion of the neighborhood in 1880. 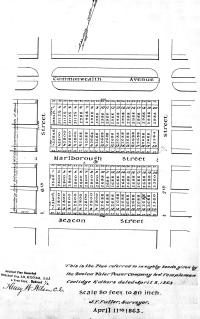 On April 15, 1863, the Boston Water Power Company entered into an agreement to sell all of its land between Fairfield and Gloucester on the south side of Beacon, north and south sides of Marlborough, and north side of Commonwealth to a real estate investment trust formed by John Templeman Coolidge, Franklin Evans, and Charles Henry Parker. The company subdivided the parcels into eighty lots (twenty per block), as shown on an April 11, 1863, plan prepared by J. F. Fuller, and issued individual deed bonds to the trustees, securing their right to purchase each lot. On January 29, 1866, the trustees paid for and took title to all of the land.

J. Templeman Coolidge and his partners offered all of their land for sale at two public auctions conducted by N. A. Thompson & Co.

On March 15, 1866, J. Templeman Coolidge and his partners offered all of their remaining land, including all of the land on the north and south sides of Marlborough and the north side of Commonwealth.

All twenty lots were sold at the February 2, 1866, auction. The Boston Evening Transcript‘s article on the auction reported the names of the successful bidders: The corner lot at Fairfield (Lot 1) was purchased by real estate dealer Henry Whitwell; the 25 foot lot to the west of the corner (Lot 2) by provisions merchant John Worster; the next six 25 foot lots (Lots 3-7) by Sidney Homer; the next five (Lots 8-12) by James Dana; the two to the west (Lots 13-14) by Andrew G. Greeley; the two next to them (Lots 15-16) by real estate investor Charles Uriah Cotting; and the remaining four lots, including the corner lot at Gloucester (Lots 17-20) by dry goods merchant Eben Dyer Jordan, co-founder of Jordan, Marsh & Co.

Some of these successful bidders purchased and took title to the land, others sold or transferred their rights to purchase it.

Eastern parcels. On March 4, 1868, J. Templeman Coolidge and his partners sold the 30 foot corner lot at Fairfield to real estate dealer Henry Whitwell. He had been the successful bidder at the February 2, 1866, auction.

On May 4, 1866, J. Templeman Coolidge and his partners sold John Worster the 25 foot lot (Lot 2) to the west of the corner lot. He, too, had been the successful bidder at the auction.

Also on April 7, 1869, J. Templeman Coolidge and his partners sold the 25 foot lot to the west (Lot 3) to Sidney Homer (it was one of six for which he had been the successful bidder) and, on the same day, he sold the eastern 11 feet to Frederick Pope.

On May 28, 1869, Henry Whitwell sold the corner lot to George M. Gibson. At this point, he owned the eastern 48 feet on the block, and Frederick Pope owned the 18 feet west of it.

On March 21, 1870, George M. Gibson sold Frederick Pope his land. Frederick Pope subsequently built 351 Beacon on the eastern 30 feet and 353-355 Beacon on two 18 foot lots next to it. At about the same time, Frederick Pope and George Gibson also were working together to build ten houses at 377-395 Beacon further west on the block (discussed below).

Central parcels. On April 19, 1871, Sidney Homer sold the remaining 14 feet of Lot 3 to dry goods merchant Augustus N. Loring, and on the same day, J. Templeman Coolidge and his partners sold Augustus Loring the eastern 24 feet of Lot 4. Also on the same day, they sold the remaining one foot of Lot 4 and the next three 25 foot lots west of it (Lots 5-7) to investment banker Henry C. Wainwright (Sidney Homer had been the successful bidder for Lots 4-7 at the February 2, 1866, auction, and subsequently sold or transferred his right to purchase them).

Augustus N. Loring’s 38 foot lot remained vacant for the next fourteen years, until June 3, 1885, when he sold it to Henry Rogers Dalton. He built his home on the eastern 20 feet at 357 Beacon and sold the western 18 feet to his brother, Charles Henry Dalton, who built his home at 359 Beacon.

Henry Wainwright developed his land soon after acquiring it in 1871, building 361-363-365 Beacon for speculative sale.

On February 7, 1868, J. Templeman Coolidge and his partners sold the three lots further west, two 25 foot lots (Lots 8-9) and one 24 foot lot (Lot 10), to Francis Brown Hayes, and the next two 24 foot lots to the west (Lots 11-12) to Charles Francis Choate. Francis B. Hayes and Charles F. Choate were attorneys, and probably were law partners (they both maintained offices at 31 Washington). Francis Hayes and his wife, Margaret McKim (Marriott) Wilson Brown, lived at 72 Mt. Vernon; Charles Choate and his wife, Elizabeth Waterman (Carlile) Choate, lived in Cambridge and later at 205 Beacon.

On the same day, Charles F. Choate sold the western 36 feet of his land to Frederick Pope and George M. Gibson, 18 feet to each. They subsequently built 377-379 Beacon, two of ten houses they built for speculative sale at 377-395 Beacon.

The remaining 18 feet of Charles Choate’s land and all 68 feet of Francis Hayes’s land remained vacant until the mid-1880s. Francis Hayes died in September of 1884. In his will, he named his wife, his step-son, William Power Wilson, and Charles F. Choate as his executors. They subdivided the 68 foot parcel and sold it in four transactions during 1886.

On January 8, 1886, the Hayes estate sold a 21 foot lot on the east to Agnes Russell (Elwood) Devens, the wife of Arthur Lithgow Devens, Jr. The Devenses built their home at 367 Beacon.

On February 15, 1886, Charles Choate sold his remaining 18 foot lot to Charles B. Wells. The next day, the Hayes estate sold Charles Wells a one foot strip at the west of its land (abutting the land Charles Choate has sold him). He combined the lots and built his home at 375 Beacon (there is no house numbered 373 Beacon).

Central and Western Parcels. Of the eight lots at the western end of the block, six (Lots 13-18) were developed by Frederick Pope and George M. Gibson, who built 381-383-385-387-389-391-393-395 Beacon for speculative sale (they also built 377-379 Beacon to the east, on the land they purchased from Charles Choate). In some cases the houses were built on land George Gibson acquired and in other cases they were built under agreements with the land holders.

On February 13, 1869, Andrew Greeley sold George M. Gibson his right to purchase Lots 13 and 14, and on April 7, 1869, George Gibson purchased and took title to the lots from J. Templeman Coolidge and his partners.

Eben D. Jordan continued to hold the right to purchase Lots 17 and 18, and in early 1869 he entered into a series of agreements with Frederick Pope and George Gibson to construct houses on them. On May 8, 1869, and September 7, 1869, Eben D. Jordan purchased and took title to the lots, and on June 1, 1869, he sold George Gibson the eastern 12 feet of Lot 17, which George Gibson combined with the remaining 6 feet of Lot 16 and built 391 Beacon for speculative sale. Eben Jordan retained the remaining 36 feet of his two lots, where George Gibson built 393-395 Beacon.

Original Construction. All of the buildings on the south side of Beacon between Fairfield and Gloucester had been built by 1886.

Both the Boston Water Power Company’s 1863 deed bonds securing the right to purchase the land and its 1866 deed conveying the land included language specifying that any building on the land “at least three stories high for the main part thereof and shall not in any event be used for a stable (except a private stable), or for any mechanical or manufacturing purposes;” that the front walls were to be set back twenty-two feet from Beacon, with “steps, windows, porticos, and other usual projections appurtenant thereto” allowed in the reserved space subject to dimensional limitations enumerated in the deed; and that “no cellar or lower floor of any building shall be placed more than four feet below the level of the mill-dam, as fixed by the top surface of the hammered stone at the south-easterly corner of the emptying sluices.” The deed also provided that the owners of the land would have the right to “cultivate trees on the side walks” in front of their land provided that they left a distance of ten feet between the front boundary of their lots and the trees.

These restrictions were virtually identical to those contained in the deeds from the Commonwealth of Massachusetts conveying its Back Bay land.

J. Templeman Coolidge, Franklin Evans, and Charles Henry Parker, trustees, conveyed the land on the south side of Beacon between Fairfield and Gloucester by the following deeds: