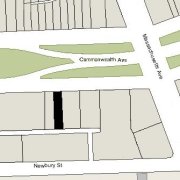 384 Commonwealth was designed by architect Arthur H. Vinal and built in 1896-1897 as a six story, six unit apartment building, The Torrington, for real estate dealer George P. Ridgway. He is shown as the owner and builder on the original building permit application, dated April 2, 1896.

George Ridgway also owned the lot immediately to the west, and in 1899 he had Arthur Vinal design a companion apartment building at 386 Commonwealth, creating a symmetrical pair similar in design to The Colonial at 382 Commonwealth, also designed by Arthur Vinal.

George Ridgway purchased the land for 384 and 386 Commonwealth on February 20, 1896, from the Third National Bank of Boston.

Both lots originally were part of one of four parcels purchased from the Boston Water Power Company on October 15, 1880, by Henry Melville Whitney, Grenville Temple Winthrop Braman, and Henry Dwight Hyde, trustees of The Park Entrance Lands Trust.

Thomas Richardson’s business failed in May of 1893 and on May 24, 1893, Mary Richardson transferred the lot at 386 Commonwealth to Francis B. Sears, who transferred it to the Third National Bank on June 15, 1893.

The circumstances surrounding the transfer were described by H. W. Chaplain, Mary Richardson’s attorney, in a September 24, 1893, Boston Globe interview following Thomas Richardson’s indictment for defrauding a number of banks and merchants. Mr. Chaplain commented that after her husband’s business failure in May, some of the creditors “’approached Mrs. Richardson and desired that she should settle their claims. They knew she was a wealthy woman in her own right, and they also knew that she was very generous and honorable, and they found her disposed to settle the matter. I know that she gave the Third national bank a very valuable piece of property, but when the claims began to multiply to such an extent that she would have found it almost impossible to satisfy them all she attempted to make a settlement.’”

Francis B. Sears continued to own the lot at 384 Commonwealth until January 10, 1894, when it was acquired by the Third National Bank, which subsequently sold both it and the lot at 386 Commonwealth to George Ridgway.

Click here for an index to the deeds for 384 Commonwealth, and click here for further information on the land on the south side of Commonwealth between Massachusetts Avenue and Charlesgate East.

384 Commonwealth was completed in late 1897, with the first residents listed in the 1898 Blue Book.

After 386 Commonwealth was completed in 1900, the two buildings were listed together as The Torrington, starting with the1901 Blue Book. They continued to be listed in that manner, implying that they were operated as one apartment house, through the last Blue Book in 1937. From 1902, however, they were separately owned. The name “Torrington” appears only over the entrance to 384 Commonwealth. 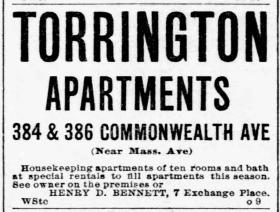 In early April of 1902, auctioneer Edward Hatch advertised that 384 Commonwealth would be sold at auction on April 14, 1902.  Either the auction was not held or there were no successful bidders, and on April 25, 1902, the Proprietors of Mount Auburn Cemetery took possession of the property through foreclosure of a mortgage given by George Ridgway in May of 1897.

On January 19, 1905, 384 Commonwealth was purchased from J. Sumner Draper by architect Charles Hercules Rutan of the firm of Shepley, Rutan, and Coolidge. He and his wife, Sarah Ellen (Brower) Rutan, lived in Brookline.

Charles Rutan died in December of 1914, and 384 Commonwealth was inherited by his wife.

On April 27, 1933, the Union Savings Bank foreclosed on a mortgage it held from Sarah Rutan and took possession of the property.

On April 28, 1933, 384 Commonwealth was acquired from the Union Savings Bank by Stanley Ward and Frederick J. Mahoney, trustees of the Ward Realty Trust, and on December 30, 1936, they transferred the property to the Brookline Real Estate and Investment Company, in which they were partners with Abraham Cohen and William H. Dyer.

On January 25, 1938, the Brookline Real Estate and Investment Company transferred 384 Commonwealth to the Union Savings Bank, which held the first mortgage on the property.

On June 1, 1943, 384 Commonwealth was acquired from the Union Savings Bank by the Cambridge Housing Corporation (Harry Moskow, treasurer). In July of 1947, it applied for (and subsequently received) permission to convert the property from six apartments (one per floor) to eighteen apartments (three per floor).

On May 24, 1948, 384 Commonwealth was purchased from the Cambridge Housing Corporation by 384 Commonwealth Avenue, Inc. Real estate dealer Louis Theran was treasurer of the company. In August of 1948, it applied for (and subsequently received) permission to increase the number of units to 21 by adding three apartments in the basement.

On August 31, 1953. the property was acquired from 384 Commonwealth Avenue, Inc., by Winthrop Parkway, Inc. Louis Theran also was treasurer of that company.

On October 10, 1962, 384 Commonwealth was acquired from Sam Wong by George L. Reef, a lawyer. In 1964, March 23 and again on March 27, the building was seriously damaged by fire, with the cause attributed to arson.

The property changed hands and on April 23, 1984, was acquired by Ronald E. Cahaly, trustee of the Three 84 Comm. Ave. Trust.