The block on the south side of Commonwealth between Massachusetts Avenue (formerly West Chester Park) and Charlesgate East (formerly Ipswich) evolved from a single parcel owned by the Boston Water Power Company, running between Commonwealth and Newbury. Unlike the blocks further east in the residential portion of the Back Bay, it is not rectangular but rather has an irregular shape reflecting the change in the direction of Commonwealth and Newbury at Massachusetts Avenue, which turn northwest at an angle to run parallel with the former Boston and Albany Railroad tracks located south of Newbury (later replaced by the Massachusetts Turnpike).

Also unlike the blocks further east, the block between Massachusetts Avenue and Charlesgate East does not have a sixteen foot alley running the entire length of the block. Rather, Alley 918 starts at its east end behind 378 Commonwealth and ends at the west at The Somerset at 400-416 Commonwealth. Alley 918 is connected to Newbury by two perpendicular alleys, Alley 917 on the east and Alley 919 on the west.  Also, unlike the other alleys in the residential portion of the neighborhood, these alleys are not public streets but rather are owned by the owners of the lots which abut the passageways, with easements for common access by all property owners on the block.

Originally, the eastern end of the block was divided by Parker Street, a 60 foot wide street located on top of the Cross Dam. It ran at approximately a 45 degree angle southwest from Beacon, through the intersection of the south side of Commonwealth and Massachusetts Avenue, and continuing southwest through Newbury and Boylston to Centre Street. Various manufacturing and industrial businesses had been located on the street to utilize the tidal power provided by the dam before its operation was terminated.

On April 19, 1870, the Boston Water Power Company sold two parcels on either side of Parker Street to lumber dealer David Nelson Skillings of Winchester as trustee of a real estate investment trust composed of himself, Lawrence Barnes of Burlington, Vermont, Charles Whitney of Lowell, and David Whitney, Jr., of Detroit. The parcel to the east of Parker Street ran to a point about 390 feet east of the northeast corner of Commonwealth and Massachusetts. The parcel to the west of Parker Street ran 24.2 feet west of the northwest corner of Commonwealth and Massachusetts. The outer (northwest and southeast) boundaries of both of these parcels were parallel to Parker Street, creating irregularly shaped lots.

On February 7, 1878, David Skillings acquired the road bed and land for Parker Street that previously had divided his land. He died in January of 1880 and the land subsequently was owned by his estate.

On October 15, 1880, the Boston Water Power Company sold the land to the west of David Skilling’s land to Henry M. Whitney, Grenville T. W. Braman, and Henry D. Hyde, trustees of a real estate investment trust known as the The Park Entrance Lands Trust. The trust purchased four parcels, including all of the land on the south side of Commonwealth running west from David Skilling’s land to the intersection with Beacon Street (in what is now Kenmore Square), and south to Westland Avenue.

The investors called themselves The Park Entrance Lands Trust because their property included park land south of Commonwealth between what are now Charlesgate East and Charlesgate West, land which was designated as the Beacon Street entrance to the new Back Bay Park (later the Back Bay Fens).

As of December 31, 1880, all of the land between Massachusetts Avenue and Charlesgate East was owned either by David Skillings’s estate (to the east) or Henry M. Whitney and his partners (to the west). 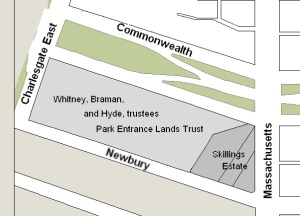 1881 to 1890: Sale of lots, Creation of Alleys, and First Construction of Houses

On March 28, 1881, Alfred A. Marcus purchased the land to the east from David Skillings’s estate. The property subsequently went through two foreclosures, and on December 6, 1886, was purchased by Henry M. Whitney (as an individual, not as trustee of The Park Entrance Lands Trust). On December 9, 1886, he sold the land to Henry Lee.

Also on December 9, 1886, The Park Entrance Lands Trust sold Henry Lee a lot to the west of the other lot, with a frontage on Commonwealth of 162 feet, drawn so that the western boundary was a straight line running south at a 90 degree angle from Commonwealth.

In 1883-1884, the trust built two houses at 378-380 Commonwealth, with a frontage of 60 feet, which it subsequently sold to Col. Alexander Pope (378 Commonwealth) and Henry Hyde (380 Commonwealth). These were the first buildings built on the block.

In conjunction with the sale of its lands, The Park Entrance Lands Trust created a sixteen foot passageway (Alley 918) running between its land on Commonwealth and its land on Newbury, from the boundary with Henry Lee’s land on the east to the land it had sold S. Endicott Peabody on the west, with two perpendicular passageways connecting to Newbury: Alley 917 near the eastern end (8 feet west of Henry Lee’s land) and Alley 919 at the western end (at the boundary with S. Endicott Peabody’s land.

On March 8, 1889, the trust sold real estate dealer Samuel Horatio Whitwell the last of its land on the block, with a frontage of 126.07 feet on Newbury between Charles Fairchild’s land and Henry Lee’s land. It included the passageway (Alley 917) connecting to Newbury and, as part of the transaction, the land was divided into two lots, the western lot being 95.07 feet wide and the eastern lot 31 feet wide, each including half of the width of the passageway (eight feet). On July 1, 1896, Henry Lee purchased the eastern lot (31 feet wide, including 23 feet of frontage and the eastern 8 feet of the passageway) and added it to his abutting property.

Unlike The Park Entrance Lands Trust, Henry Lee neither subdivided nor developed his property. It remained vacant in 1890. 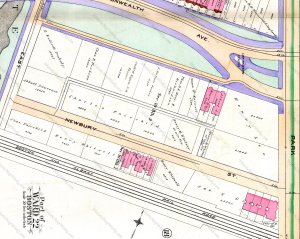 1890 and later: Development of the Block

Development of the land between Massachusetts Avenue and Charlesgate East proceeded slowly. As of 1888, the only buildings on the block were the two townhouses at 378-380 Commonwealth. By 1890, four townhouses had been built at 399-405 Newbury on the land owned by S. Horatio Whitwell, but there was no new development on Commonwealth until 1895, when jeweler and real estate investor Edwin B. Horn, Jr., built an apartment house, The Colonial, at 382 Commonwealth.

On December 8, 1895, the Boston Globe reported on plans to construct a bicycle rink and clubhouse on the southern side of Commonwealth between Massachusetts Avenue and Charlesgate East at what appears to have been the western end of the block. The article indicated two sites were being considered: “one running through from Commonwealth av to Newbury st, just above Massachusetts av, and the other in the same neighborhood, both facing the Back Bay Fens.” The article noted that architects Dwight & Chandler had prepared plans for “a one-story building in the renaissance style, 227 feet long by 87 feet wide, of corrugated iron and rough stucco, handsomely ornamented, and roofed in red tiles.” Although a number of subscribers already had committed to the club, the building was never built.

In 1898-1899, The Somerset was built at the western end of the block, and in 1901 it purchased the lot to the east and built its annex. Also in the late 1899s, apartment houses were built at 384 and 386 Commonwealth, and in the early 1900s Volkmann’s School was constructed on Newbury.

Henry Lee had died in November of 1898 and his property was held in a trust established under his will. The land remained vacant until 1906, when the Sherman Building was built at the northwest corner of Newbury and Massachusetts Avenue.

No other construction occurred on the block until 1908-1909, when the Hotel Puritan was constructed at 390 Commonwealth.

In 1912, the Harvard Club was built at 314 Commonwealth, running through to Newbury, on the land owned by Henry Lee’s estate, and in 1925, The Eliot was constructed at 370 Commonwealth, on the remaining land at the southwest corner of Commonwealth and Massachusetts Avenue.

In October of 1927, the Harvard Club acquired the townhouses at 309-401 Newbury and razed them to make room for a parking lot.

The lot at 388 Commonwealth remained vacant, as did all of the land on Newbury between The Somerset and Volkmann School (later Middlesex University).

By the late 1920s, all of the land on the south side of Newbury between Massachusetts Avenue and Charlesgate East had been developed, including townhouses, apartment houses, and commercial buildings. All of these buildings were demolished in the 1960s for the Massachusetts Turnpike.

In 1966, The Somerset built a multi-story parking garage on the vacant lot at 425 Newbury, with a frontage of 200 feet.

As originally laid out, Commonwealth Avenue between Massachusetts Avenue and Charlesgate East had a curved roadway intended to provide a transition from the formal central mall design of the preceding blocks to the parklands in the Back Bay fens.  It included a triangular island at the eastern end on which the statue of Leif Ericson (Erikson) was located (dedicated in 1887), an irregularly shaped strip of green space on the north side in front of 371-387 Commonwealth, and an irregularly shaped island of green space on the south side, beginning at 378 Commonwealth and extending to Charlesgate East.

In 1917-1918, the roadway was straightened and widened, the central mall design was extended to Charlesgate East, and the green space in front of 371-387 Commonwealth and 378-416 Commonwealth was eliminated. The Ericson statue was relocated to the Charlesgate East end of the block.

Disagreements about how the costs of construction and relocation of gas and electric utilities would be funded delayed the project until 1937. Construction began in mid-1937, and the project was dedicated by Mayor Maurice J. Tobin on January 27, 1938.

The on- and off ramps for the underpass required reconfiguration of the Mall between Hereford and Charlesgate East.

The April 19, 1870, deed from the Boston Water Power Company to David Skillings for the land at the eastern end of the block did not contain any building use or construction restrictions, nor did it require that buildings be set back from the street by a specific distance. No such restrictions were added to subsequent deeds.

The October 15, 1880, deed from the Boston Water Power Company to The Park Entrance Lands Trust did include stipulations requiring that the exterior walls of all buildings were to be of brick, stone, or iron; buildings could not be used for livery stables, carpenters’ shops, white- or blacksmiths, “or for any other business which shall be offensive to the neighborhood for dwelling houses;” and all buildings were to “be of good class and not less than three stories in height including basement.”

The original deed did not include any requirement that houses be set back a specified distance from Commonwealth or Newbury. However, setback requirements were included in some subsequent land transfer deeds from the Park Entrance Lands Trust.

The trust’s June 13, 1883, deed selling its land at the corner of Commonwealth and Charlesgate East did not contain any setback requirement. However, all of its other deeds conveying land on Commonwealth included language requiring twenty foot setback, with steps, porticos, bays and bows, and other usual projections allowed in the reserved space, subject to depth and dimensional limitations similar to those required by the Commonwealth of Massachusetts deeds conveying its lands (as expanded upon by the regulations of the Commissioners on Public Lands).

The trust’s deeds for land fronting on Newbury included similar language specifying a ten foot setback from the street.

On July 1, 1908, all of the owners of the property on the south side of Commonwealth and north side of Newbury entered into an agreement allowing bay windows to extend into the alley, provided that they extend no further than three feet and are at least 19 feet above the surface of the passageway.